Mon 30th November 2009 Dinner with the High Sheriff of Hertfordshire

All Hitchin Clubs are invited and guests are welcome.
19.00 at The Sun Hotel

A new Club is launched at the Chartridge Conference Centre

Fifth Friday of the month, so no breakfast meeting today. Meet 6pm at Coopers Arms for
a drink for those who can make it.

Details to be confirmed 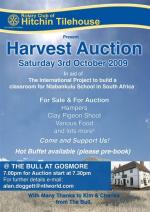 To be held at The Radcliffe Arms - limited spaces so please confirm attendance.

At the Radcliffe Arms

Fintan Donohue, Principal of North Herts College will update us on the development of the Hitchin campus.