The Rotary Club of Ripley and Send was founded in 1975 by a small group of businessmen keen on supporting both the local and International Community, yet at the same time enjoying each other's companionship. Since then we have raised over £400000 for various causes and provide on going help to both the young and the elderly both Internationally and within the Local Community. 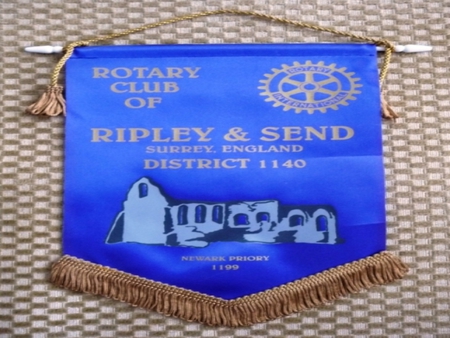 We are twinned with two European Roary Clubs:

a) The Confolens-Charante Limousine Club in South West France with regular exchanges taking place on a bi annual basis; and

b) The Capelle a/d IJssel Club in the Netherlans who we meet up with again on a Bi annual basis for a weekend away.

Locally we meet on a regular basis at the Talbot Inn in Ripley. Our main event is leading the organisation of the Ripley Event, a Fair which reputably has been taking place on the third Saturday in July since Edward II's time.

However we are also very keen to support smaller local Charities and Organisations not having the Corporate Infrastructure to organise their own dedicated Fund Raising activity.

In December 2018 our Santa Claus was out with his new Sleigh touring the streets of Ripley, Send and West Clandon. Although the weather was not very kind his "elves" managed to collect £2150 which will be used for helping local good causes. This sum also included the donations made outside Waitrose in West Byfleet, for which we say Thank you very much. 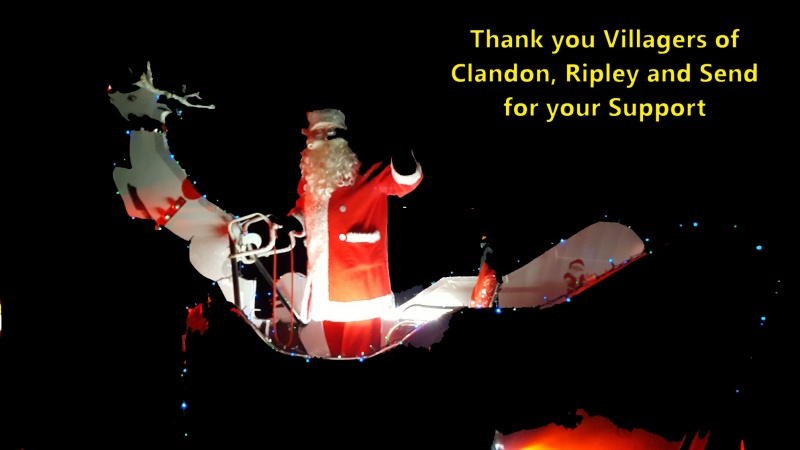 In September 2018 we were honoured to be one of only five Clubs in District Rotary South to be awarded the Rotary International's Presidential Citation for making differences to the lives of People all around the World. 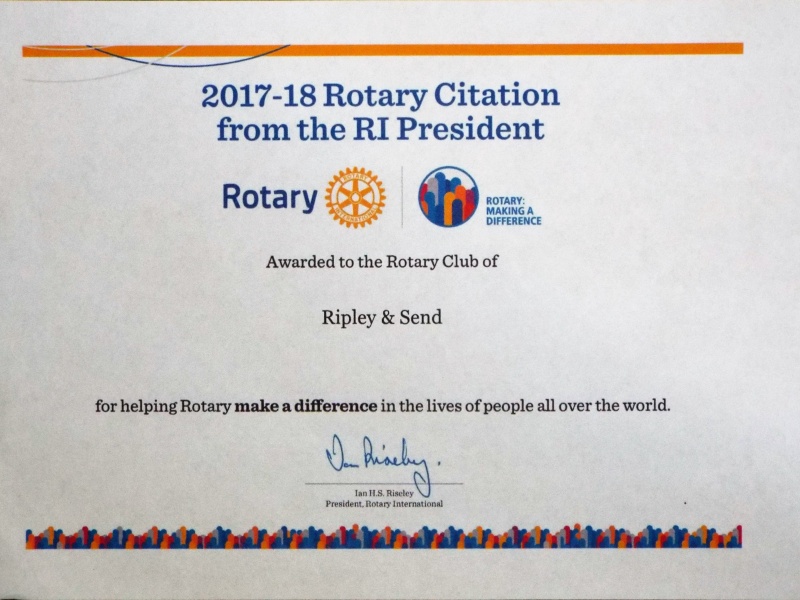 This was the third time that the Club had been honoured this way - the first being in 2008  as a result  of the efforts of past Rotarians Mike Grey and Ernie Stubbs for the production of the Club Magazine.

This year we are also supporting both National and International Disasters - the first of which is as follows, for which we donated Two Water Survival Boxes from funds raised at our Ripley Event: 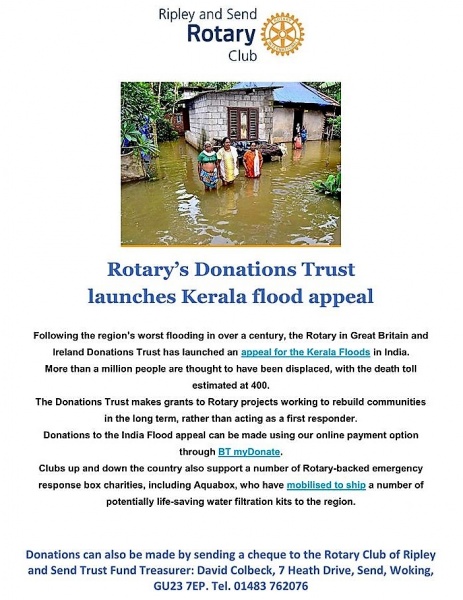 As a result of last years succesfull Ripley Calendar Project, courtesy of funding by Wills & Smeardon, we will be again producing one for 2020 - Again kindly supported by Ewebank Auctioners: 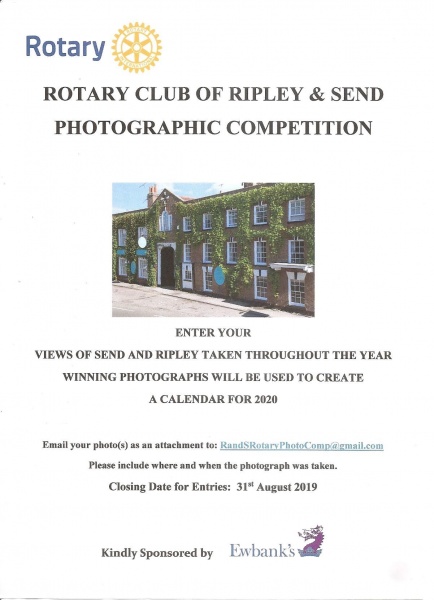 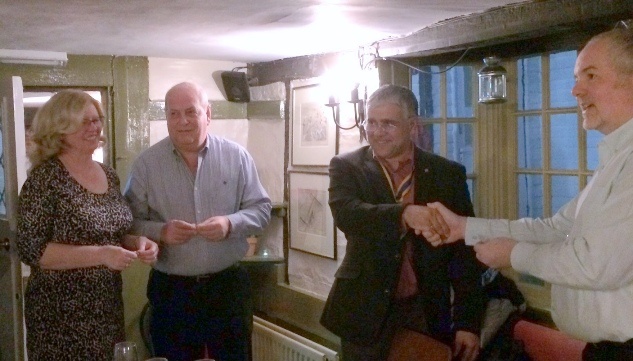 . Joining them was Associate Member Neil Freeman who has been helping us out now for a number of years.

We look forward to working with them in the forthcoming years and trust they will get as much Fun and Fellowship as our present Members have.

They are relocating to Goldsworth Park and also enlarging their catchment area to include the Villages of Ripley and Send.

This Joint Effort by nine Clubs in NW Surrey working together with Clubs in France, Scotland and Trinidad, Local Authorities and Major Donors,  with the help of Rotary's own Charity in the US -The Rotary Foundation -  managed to raise a total sum of between £105/110,000 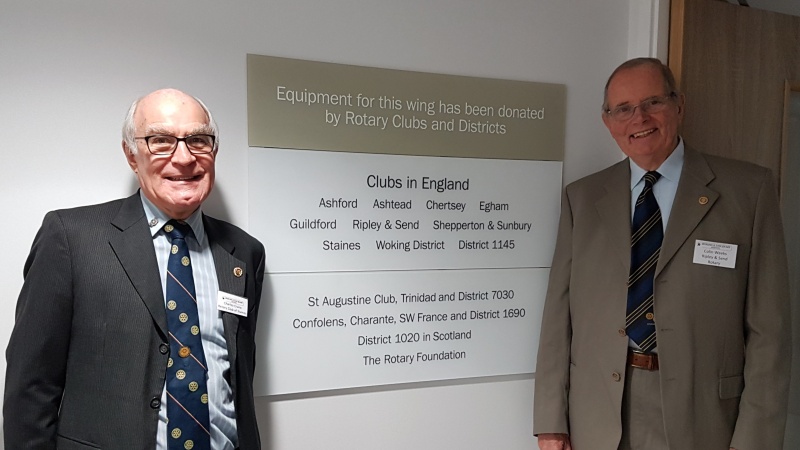 ADDITIONAL FUNDS HOWEVER ARE STILL REQUIRED!! 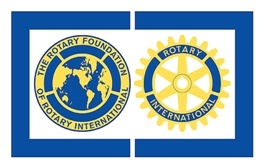 If you believe that this is an activity that you would like to get involved in, please contact Malcolm on 01483 573274 or come along to one of our Tuesday Evening Meetings at the Talbot Inn.

Over the years we have also helped other local charities and organisations. Below are listed a few: 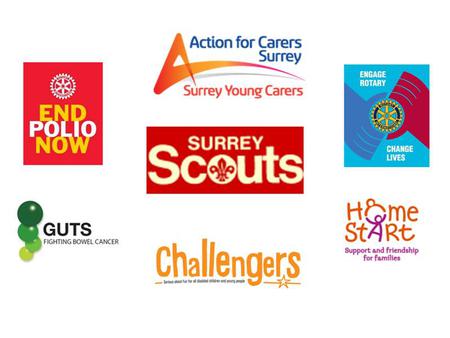 An illustrated talk by David Henderson

Meet in the Talbot Inn Bar for a Natter & Noggin

Further details to be advised

Meet in the Talbot Inn Bar for a Natter & Noggin