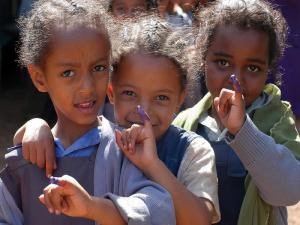 The club has been raising money since 1988 to rid the world of polio. For more information click

This Club is now disbanded.

A final EGM was held on 25th June 2021 to confirm the earlier decision to disband the club. The decision was unanimous

We are men and women based in the North of Pembrokeshire, who meet for a meal together once a week for fellowship and also discuss how we can help fellow citizens. We are one of seven clubs in Pembrokeshire, 62 clubs in the South Wales district. There are clubs throughout the world with a total membership of 1.2 million.

We give service locally by working with the local schools with various competitions and other projects. We respond when asked for help such as to marshal a local sporting event. We hold fund raising events for local causes as well as international projects and disasters. Because Rotary is and international organisation we can ensure that money is properly spent with minimum overheads. One of our fund raising schemes is our Race Night. Our equipment is also used by other local organisations and we have helped them raise thousands of pounds over the years.

The twin towns of Fishguard and Goodwick lie on the North coast of Pembrokeshire. The Fishguard ferry, which connects with Southern Ireland is based in Goodwick. On the opposite side of the bay is the picturesque fishing harbour of Lower Fishguard which was used in the filming of "Under milk wood" with Richard Burton and "Moby Dick" directed by John Huston and staring Gregory Peck. History records that the last invasion of Britain took place in 1797 when 1200 French troops landed a mile to the west of Goodwick and after several days they surrendered on Goodwick beach to the local militia assisted by the ladies of the town.

Get the Rotary Club of Fishguard & Goodwick app!