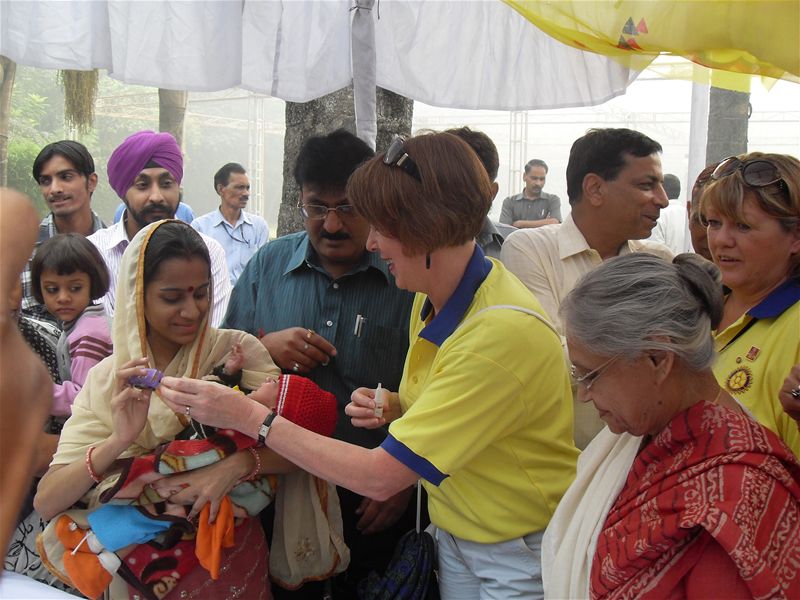 A Few Words from Kevan just before they set of for India. You can follow their trip by going to their Blog at:

We're taking part in a huge Rotary International project to finally erradicate polio from the world.

There are only four countries where it's still rife: Pakistan, Afghanistan, India and Nigeria (good acronym, eh? PAIN) and unfortunately they're all a relatively short plane ride away from us. The first country we're going to hit in this big way is India, which is probably the easiest in many ways. Hundreds, probably thousands of Rotarians from all over the world are travelling out to India at their own expense to take part in the National Immunisation Day on 8th November. We just happen to be going to Delhi; the event is taking place in most major cities throughout the country. We'll be there for five days in all and we'll be manning one of the immunisation stations (try saying that after a couple of glasses of wine!) and we expect to immunise thousands of people that day. We'll be marking the little fingers of everyone who's been immunised with purple ink: hence we're calling it Purple Pinkie Day! Why are we going? We've been fundraising for this international project for the last couple of years because we think it's such an important issue. The Rotary campaign has been going on since the 1980's and we're nearly there. It just needs a big push, and we'd like to take part in it personally It's a big part of our Rotary District's targets and we're all working together on this. Also, we've been to India before and it's one of those places which puts everything into perspective: we think we have problems? We think life's not easy? We think we're badly done to? Try putting up with some of the things that people over there have to! It's International Rotary Day on 23rd Feb. 2010. We'll be doing a lot of work locally during that week with schools who have already shown interest in the polio project, going along to talk about our experiences in India. Ther are other events planned and it looks as if we'll be working together with the other Rotary club in town in order to make it a really special About us as people, I'm the President of Bourne St. Peter and Angela in the Junior Vice-President. She's also the Chief Executive of NHS Peterborough (the only PCT in the north and midlands to be rated as Excellent by CQC ) so she's a bit of a celeb. as far as that city goes!; I'm a specialist teacher working with rather difficult kids in Boston. We're both 54; we live in Tilia Way, Bourne and have three children, two at Bourne Grammar and one at Nottingham University. We've been fortunate, and I suppose we're both involved in Rotary as it's a way of giving something back. 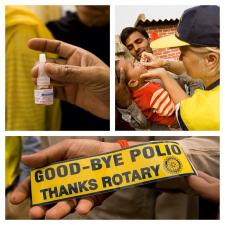 Social Evening at Alan and Maggie's home for an evening meal and updates on our India's National Immunisation Day experiences.

more Please meet up at 7:30pm for an evening meal and updates on our experiences of India during the February 2016 National Immunisation Day in India supported by Rotary's "Polio Plus" campaign. Family and friends are all welcome to join us. 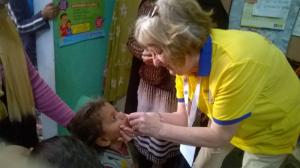 more Club President Alan and wife Maggie recently returned from India where many thousands of Rotarians from around the world worked hands-on to immunise 172 million children under 5yrs with the Polio vaccine in just 6 days.

"Shelterbox" on its way to Nepal after the country recently suffered a devastating earthquake.

more On 29th April 2015 we purchased another "Shelterbox" which this time will be used in Nepal after the country recently suffered a devastating earthquake.

more Joseph Matome benefits from a pair of spectacles we collect in our work with Vision Aid Overseas. Joseph is a 43 year old geography teacher in a small village of the Livingstone region of Zambia. His improved eyesight enables him to continue teaching.

more Celebrating and promoting to the public our World Rotary Day in Bourne Market on Thursday 23rd February 2012. Many Club members on rotation manned this stall during the day sharing experiences and distributing information leaflets.

more Club Rotarians along with friends and members of our local Youth Club went bag packing at Tesco Bourne to raise funds mainly for Shelterboxes to help families in the Philippines following the recent Typhoon Halyan.

What Do We Do

more You've probably seen us out around town, collecting for disaster appeal or making people aware of illness which might affect their lives.You might have seen us out working: picking up litter and planting bulbs to brighten up the town.

more Hundreds of glasses are being collected from our "Spectacle Receptacle Bin" in the Bourne Tesco store. They are all on their way to some African countries where many thousands of people are disadvantaged by poor vision and lack of spectacles.

more 10 year old Jackline Altuiha couldn't read her favourite book until she was helped by Vision Aid Overseas who dispense the spectacles we collect to the remotest parts of Africa. Our collection container is in the entrance to Tesco Store in Bourne.

INTERNATIONAL (Charitable work that we do Overseas)

back INTERNATIONAL (Charitable work that we do Overseas)