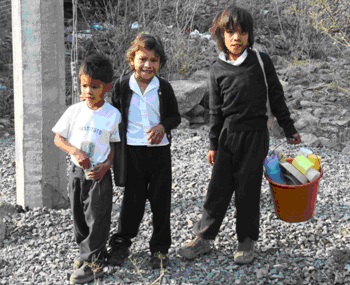 Oaxaca Streetchildren Grassroots was founded by Jodi and Harold Bauman.

Harold and Jodi Bauman first visited Oaxaca, Mexico on vacation. They were charmed by the city's intricate architecture and the dramatic landscape, but disturbed to see young children, clearly living in poverty, selling trinkets and candy in the streets day and night. They feared that these children would never be able to break out of poverty's vicious cycle without an education. Wanting to do something, Jodi and Harold started by sponsoring individual children, helping them enroll in school and paying for school supplies and uniforms. They persuaded others to do the same, and in 1996, the Oaxaca Street Children Grassroots child sponsorship program was created.

Jodi and Harold moved to Oaxaca and chartered a sister organization, El Centro de Esperanza Infantil (the Center of Hope for Children). In addition to their child sponsorship program, the Center also has a children's soup kitchen and a volunteer nurse.  Sadly Jodi and Harold passed away some years ago but the work they started continues and is growing almost daily.

The Rotary Club of Bishop's Stortford first became involved with the Oaxaca project in 2000, following a visit to the city by Rtn. Peter Scarlett.  Two years later it was taken up as a club international project when Peter and Rtn. Brian Edwards walked the 200 miles across Scotland from Milngavie (near Glasgow) to Inverness and in so doing, with the help of members and an education trust, raised