More about our Club/ A Member's View

'When I was new, I had this view'.......A personal impression of Rotary written by David Hughes in 2011 after 12 months of membership

The funny thing about Rotarians is that you know they're out there somewhere but it's hard to catch sight of them - and not everybody would know what to make of them even if they saw one.  Well, in Marlow it's different.  They are about but there are so many they need two separate clubs.  So what is Rotary and what do Rotarians do?

Rotary has been around for a long time.  In 1905, Chicago lawyer Paul P Harris was talking with three friends and he had the idea of a club that would encourage fellowship amongst members of the business community.  He was also looking to find the kind of friendly spirit he had known in the villages where he had grown up.  That was the first Rotary Club meeting.

Marlow Rotary club was formed in 1948.  Since then it has regularly maintained a membership of between 40 and 45 and meets every Thursday for lunch and to discuss the business of the club. Around ten years ago some Marlow members decided that lunchtime was great fun but not easy to combine with an active career.  They agreed that they should start their own Rotary club under the watchful eye of what has come to be known as the 'Mother Club' i.e. Marlow.  They called the new club 'Marlow Thames' and it meets on Wednesday evenings at the King's Head, Little Marlow. There are approximately 35 members - half of which are women.

Although you may not know much about Rotary, if you live locally, you are almost certainly familiar with some of their activities.  Think Santa Fun Run, jointly organised by Marlow and Marlow Thames Rotary Clubs.  Or Cookham Regatta, where the Cookham Bridge and Marlow Thames Clubs come together. These are both enormously successful local events organised entirely by Rotarians and they raise vast sums of money for their selected charities. Rotarians are enthusiastic, and active volunteers - men and women from business and professions who share a common interest in helping others. 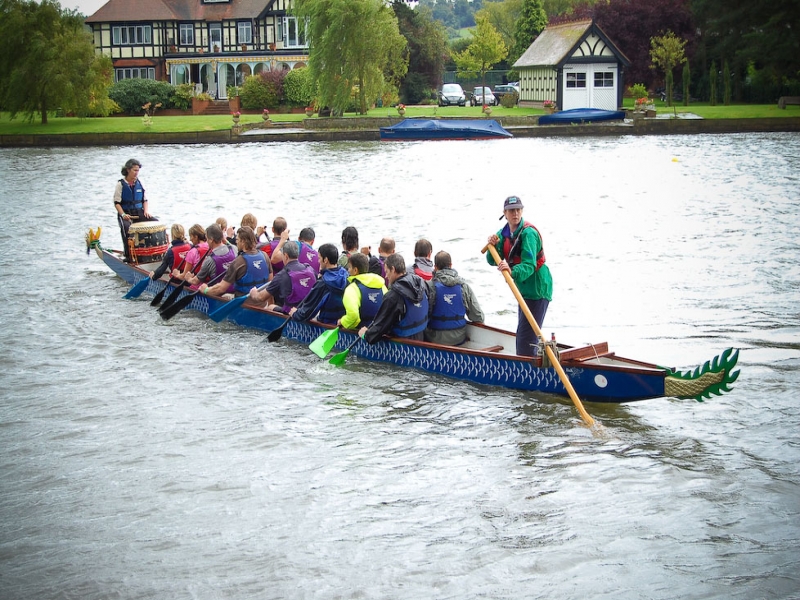 As well as raising money for good causes they like to raise a giggle and their weekly meetings have been known to dissolve into hysterical laughter, albeit probably at another member's or visitor's expense. The point is that they are generally not just serious, single minded worthies;  yes, they want to help others but they definitely want to enjoy themselves at the same time.  Club meetings are an opportunity for a good meal, the pleasure of fellowship and to think of ideas of benefit to the club, its objectives and its members.

High profile and thought provoking guest speakers are regularly invited to share their experiences. Recently, Alan Spong, 90, the last surviving boat captain from the evacuation of soldiers in Dunkirk, recounted the story of the 'Little Ships' and his part in that terrible experience in 1940. Very few eyes in the house were dry when he'd finished.  And not just because his story was so harrowing but also because he had a great sense of humour.  Other speakers have fascinated members with tales of adventures in Africa, Gurkas' hardships in their homeland, the work of a bomb disposal expert, experiences of a Concord pilot and the joy of handbells.  All of them interesting, informative and often funny. 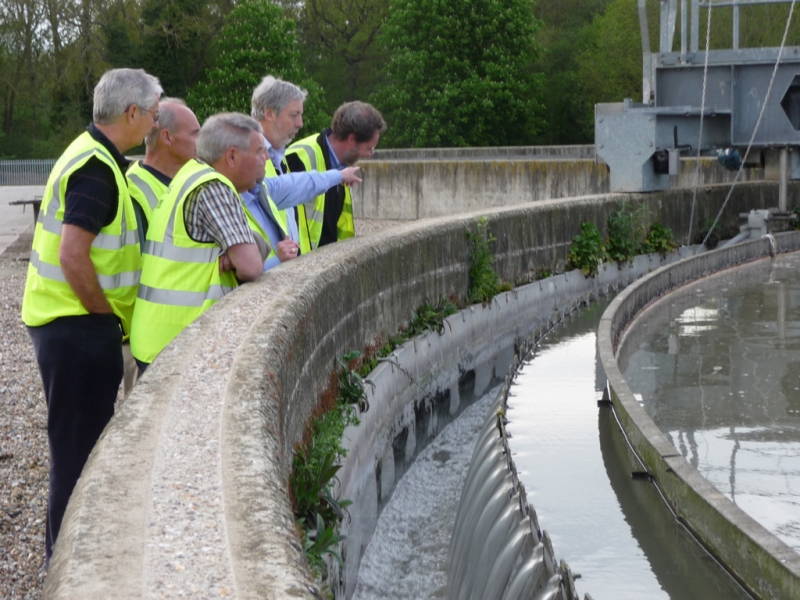 Rotarians spend quite a bit of time out and about.  Between them, Marlow and Marlow Thames visited the Olympic Park in East London, Stanlake Vineyard to taste the Wine (hard one that) , Cliveden Open Air Theatre and a banquet in a Chinese restaurant.  Oh, and very few members turned their noses up for a visit to the local sewage works.  They have organised jazz concerts, boat trips and been involved in Rotary Youth Speaks, Rotary Young Chef and RYLA, an outward bound style course to promote future leadership qualities.

Exchange visits to overseas clubs are a regular feature where members enjoy local hospitality and stay in their hosts' homes. Of course, the favour is returned so if you bump into a group of foreigners strolling down the high street sporting Rotary badges, they are probably staying with local Rotarians.

Of course, the primary objective is to help others and raise money for many charities in the UK and overseas. This has included, in 2010, local youth charities such as Helen and Douglas House and, overseas, the Kamuli Mission Hospital in Uganda.  If asked the question: 'what do you think is one of the greatest achievements of Rotary?' the answer would probably be the campaign to wipe out Polio worldwide.  Since 1985, when Rotary became involved in polio eradication, the number of reported polio cases has fallen from 350,000 a year to 1,000 and millions of children have been saved, thanks to the determination of Rotarians across the globe.

Rotary round the world has various mottos including 'Service above Self' and 'They profit most who serve best'.  In Marlow and Marlow Thames we agree with those sentiments but prefer our version which sounds a little bit closer to our own experience 'Rotary - Having fun helping others'. 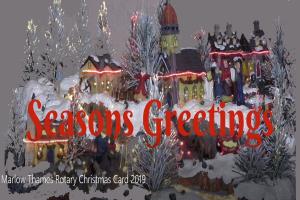 Greetings messages from members in video 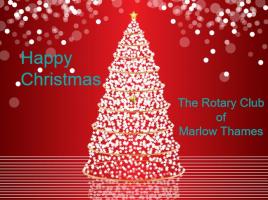 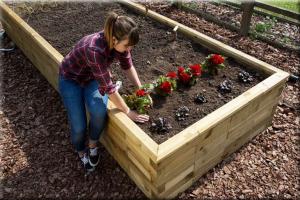 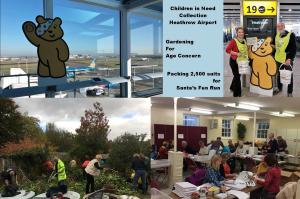 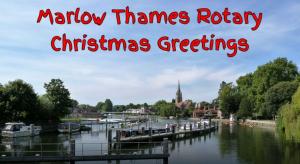 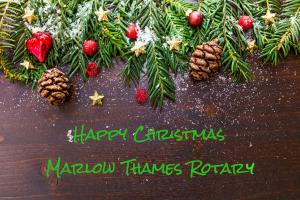 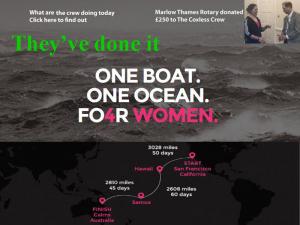 What are we doing today? Please click again on the link below 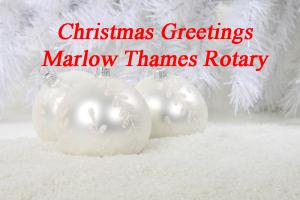 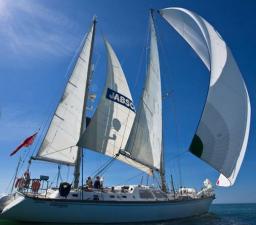 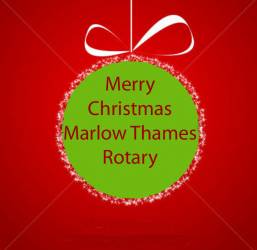 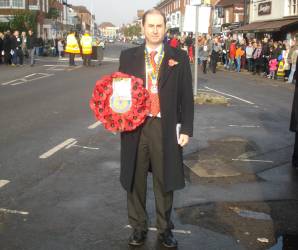 President David Miller at the Remembrance Day Service in Marlow 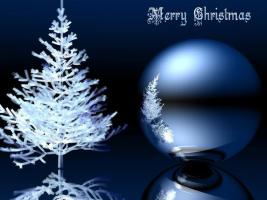 Christmas Greetings to members of the Marlow Thames Club

This area contains a library of RIBI documents including the Club Constitution. Note that if you open the document 'RIBI Constitutional documents - final April 2012' the actual Club constitution starts on page 33. 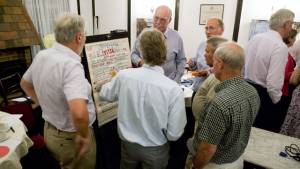 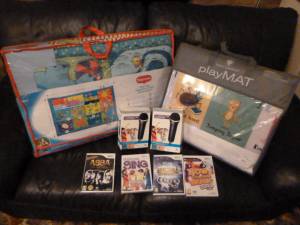 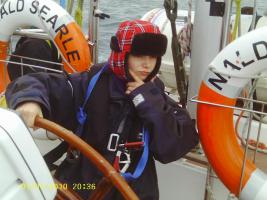 Joining information about the Rotary Club of Marlow Thames 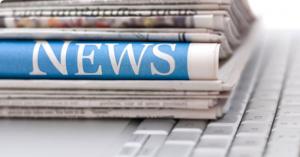 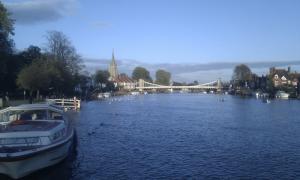 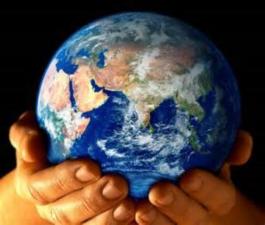 Some of the organisations which have benefitted from Cookham Regatta, Santa's Fun Run and directly from Marlow Thames Rotary Club