arrival in Arusha. We arrived to find that our contacts at the college had both left, but were assigned Ahiadu Sangoda, a newly appointed tutor. Fortunately we were assigned a large classroom alongside the resource centre which allowed us, over 2 to 3 days to unpack, sort and catalogue the books. This was not an easy task, matching multiple volumes, deciding on the category for some books and dealing with constant power failure. This delayed our work, as did the failure of the promised shelving to materialise.
With a lot of chasing a joiner was found and after paying for the timber in advance, he did an excellent job working over a weekend to prepare floor to ceiling shelving. He also completed a well-produced, glass-fronted cupboard that eventually housed the audio collection, tape players and low vision aids. Ahiadu proved to be an excellent recruit and soon grasped the concept on the resource centre. We were told that the power failure was due to the electricity bill not having been paid!

We just an hour to spare before Rtn Denise Jackson from the Dundee Discovery Club and her husband Andy were due to leave, we had the shelves complete and the books on the shelves. We had set up a new computer and printer and installed audio recording software. Despite our best efforts we failed to resolve the problems with the Braille embosser, thermoform tactile diagram machine and photocopier.   Money has been left to fund the repair and maintenance of this equipment, together with support from the Mt Meru Club.
Time was spent with Ahiadu passing on teaching resources for mobility, Braille and low

vision. The tape players were all checked and sorted and it was agreed that, together with the low vision aids, they would be provided directly to blind students when the tutors go out to visit students on teaching practice. Before leaving Patandi we produced multiple copies of a Swahili Science textbook that had been recorded and which we passed on to the schools in Mwanza and Bukoba.
In order to determine the ongoing support of the college, we visited the newly appointed District Commissioner who promised to speak with the ministry of education in Arusha. On our final visit to Patandi we had timed out visit to coincide with 5 inspectors from the ministry who were visiting the resource centre. Ahiadu gave an excellent presentation in Swahili and it was clear that she was proud of what had been achieved. She tells us that the inspectors were impressed and hopefully will provide ongoing support.
Work is ongoing to put the library catalogue on-line and can be accessed at www.librarything.com/catalog/patandicollege. We also still need to repair the remaining equipment, establish the digital recording and to ensure that a lending and copying facility for students across Tanzania becomes a reality. It was pleasing to find that since our last visit the equipment had remained intact and that Swahili recordings had been made. The icing on the cake was to meet one of the students photographed at the launch of the resource centre one year earlier, and who had been continuing the work we had taught him.
Future plans should include the provision of an Internet connection to the resource room, provide equipment and materials for comb binding of Braille books, together with packaging and labels for mailing books and audio tapes out. It would be helpful to provide the college with a new and simple website and which they can edit themselves. Once the copying and loan of resources has been established, a bolder programme will be to establish Daisy recording facilities.
Upendo Leprosy Home

Our visit to Upendo coincided with the opening of a new English medium primary school and to which 2 of the children had been enrolled. Catholic Nuns had established the school, and we had hoped that our visit would coincide with the end of the formalities and performances by the children. That was not the case and we had to sit through nearly 2 hours of speeches in Swahili. We did get to see the children perform and partake in the

more These are a few of the memories that the group who traveled to Tanzania took back from their trip. 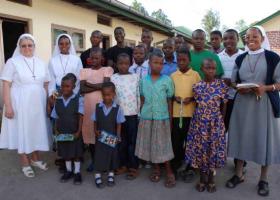 back The Rotary Club of Kirkcaldy supports various projects around the world.