Thr Roles and activities of the Membership Services Committee


This Committee's primary role is following the welfare of existing members and ensuring that prospective and new members are quickly integrated within the club. Other roles include ensuring that the Club has robust child and vulnerable persons protection policies; and risk assesment procedures in place. 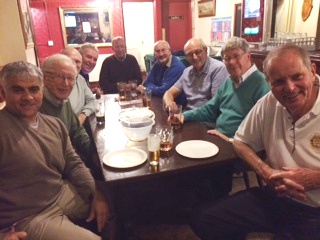 For once our Darts Team of Colin, Ernie, Malcom H. Michael R & Tom surprised everyone including themselves by beating the RC of Aldershot Team ( who said they hadn't played for two years) by two stright games. What was unusual neither side got down to Double One!!

Revenge was sweet however with Aldershot, quite deservadly picking up the Charity pot. You can also save money on New Tyres, Car Service, Batteries and Ferries and help Rotary's fight against Polio by going to http://www.rotarytyres.co.uk