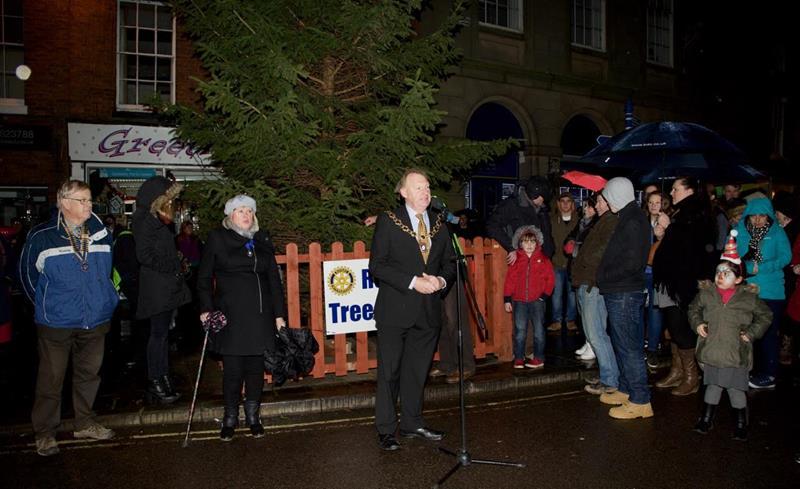 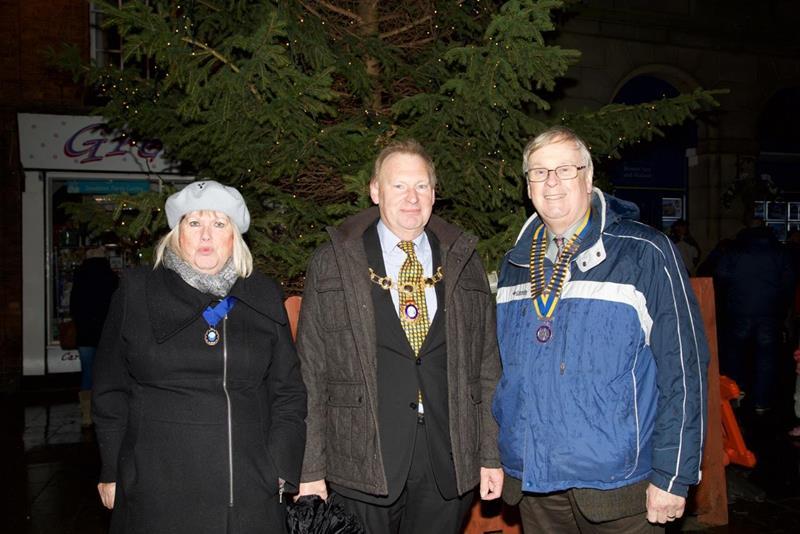 Tree  Of Light Appeal 2015
The Rotary Club of Ellesmere recently reported that its ‘Lights of Remembrance’ Appeal raised £1300 for the Severn Hospice.  The Appeal began with a Blessing of the Tree of Light by the Reverend Philip Edge at the start of the Ellesmere Winter Festival on Friday 27th November.  The Tree was donated by ETC Sawmills of Ellesmere, to whom the Club is very grateful.  The Lights were switched on by Mayor of Ellesmere Ian Ward, in the presence of the Lady Mayoress, the President of Ellesmere Rotary Club, Reverend Ian Hutchings and hundreds of townsfolk. After this locals enjoyed an evening of late-night shopping that was preceded by the arrival of Santa on a narrow boat, who then progressed through the town accompanied by a lantern procession and band music organised by Fizzgigs and singing from local choir Mere Melodies.  Thanks also go to Tescos of Ellesmere and Rowlands Pharmacy, where the Books of Remembrance could be viewed.  Monies were collected in the Square and at Tescos, and the Club is very grateful for the commendable generosity of the people of Ellesmere and hinterlands, which was never dampened by the awful weather that the country has experienced.  From other funds that the Club has been collecting it has been able to contribute £500 to flood relief in the North, which was sent as a part of a £12,000 donation from all the Rotary Clubs in the District.  The Rotary appeal for this fund is ongoing and the Ellesmere Club would be very grateful for any monies that donors may like to contribute.
For more information about Ellesmere Rotary Club and its activities contact the Club Secretary on 01691 777178.  The club meets regularly at The Black Lion in the town on Wednesday evenings.
Photos  L-R as one looks at it.: Rev Ian Hutchings (President of Ellesmere Rotary Club), Lady Mayoress and Mayor Ian Ward.  All are standing in the Square by the Tree of Light before and after the lighting ceremony.

A Thank you from the Stroke Association

Thank you letter from The Stroke Association for raising funds.