During the year Enfield Rotary is involved in many events; some are for fun and some are fund raising events.


Young Musician of the Year
The Rotary Year began this evening with the presentation of the Trophy and Awards donated by The Rotary Club of Enfield to the outstanding young musicians nominated by the Enfield Arts Support Service at their annual GALA CONCERT held in the hall of Enfield Grammar Upper School. The Trophy and awards were presented by the Club's President..

Coffee Morning
On a warm and sunny day club members kindly made their home and garden available for a 'COFFEE MORNING' which is an annual nationwide fund raising event promoted by MacMillan Cancer Support. Together with donations the day raised £478 for the charity.

Rotary District Conference
Several members represented the Club at the annual CONFERENCE for London District 1130 which is held at the Conference Centre at Eastbourne. The weekend is a mixture of Rotary business and work interspersed with a lovely dinner and entertainment.

Head Pupils Evening
Head pupils from a number of senior schools in Enfield who are in their final year are invited to join us for dinner at our regular evening meeting. The objects of Rotary are explained and in turn the pupils are invited to speak about how they intend to further their education and the careers they would like to pursue. Rotary members then have an opportunity to give a brief overview of their career and any tips for success.

Father Christmas Float
Early December will be a busy time for our members. Over nine evenings The Rotary Club of Enfield, supported by helpers from local charities, accompanied by an illuminated FATHER CHRISTMAS on his float will continue its tradition of visiting as many households in North Enfield as time permits. This is the Club's main fund raiser. Father Christmas to the tune of festive music will hand out sweets and invites donations from those who feel able to contribute. Every penny of the monies collected is given by us to local charities. Last Christmas we collected about £3500 and this was divided between charities who operate in the London Borough of Enfield. Today for safety and speed we encourage Father Christmas to leave his reindeer behind and to rely upon motorised transport. Anyone who wishes to help us on these evenings is very welcome. For the last two years on at least one evening it has snowed but as you would expect Father Christmas and his helpers still turned out regardless.

International Charity Lunch
This is another of our regular annual events when the Rotary Club of Enfield books a restaurant for its members, their families, friends and anyone else who would like to join us. We enjoyed lunches in a local restaurant in the style of French cuisine or Indian or Chinese. A fixed price menu is agreed with the restaurant. The proceeds from a small donation and a raffle are distributed to an international cause or charity. The money collected at one lunch was sufficient to fund one 'Shelter Box' containing a collection of equipment much needed in the event of disaster relief to the value of approximately 500.

Annual Quiz Night
A quiz master sets the questions, many we are able to answer, but a few cause difficulty; see if you agree. The start time is 7.30 pm. A supper (Fish and Chips or Ploughmans) is included (bring you own drinks and nibbles) and the profit from the evening and the proceeds of the raffle are donated to charitable causes.

Winchmore Hill Fancy Fayre
A Fancy Fayre took place to celebrate the centenary of Hennrietta Cresswells book "Memories of a lost village".  There were stalls, events, displays and plenty to eat and drink. Enfield Rotary Club ran the POP CORN MACHINE and managed to raise £400 for NOAH'S ARK childrens charity.

Enfield Rotary Club are proud to continue to support Enfield Arts Support Services and we had the pleasure of being asked to attend their Gala Concert that was being held at Enfield Upper Grammar School. The young musicians played within an orchestra, a group or as soloists and we listened to a wonderful combination of music from the 1800's to present day. Our club was honoured to present cups, monetary prizes and certificates to a number of students for the Enfield Musician of the year award. 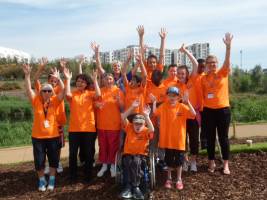 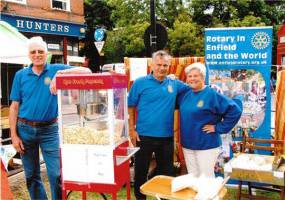 more Radio Enfield celebrated 40 years with a weekend of live to air broadcast on FM. 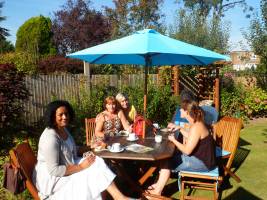 more On Saturday 1st October 2011 we held a coffee morning to raise funds for MACMILLAN CANCER SUPPORT. We were blessed with a warm and sunny day and it was nice to chat to all who came along. We raised ï¿½478 Thank you 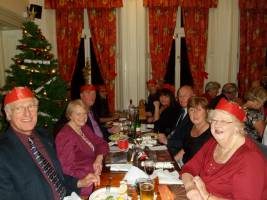