Ambassadorial Scholars - What are they?

Ambassadorial Scholarships (previously Global Scholarships) started in 1947, are Rotary Foundation's oldest and best-known program. Since then, nearly 38,000 young men and women from about 100 nations have studied abroad under its auspices

Haddenham and District Rotary has hosted many Scholars from around the world who choose to come and study in Oxford.

The program sponsors several types of scholarships for undergraduate and graduate students as well as qualified professionals pursuing vocational studies. Today it is the world's largest privately funded international scholarships program. Over 800 scholarships have been awarded to scholars from about 70 countries and who have studied in more than 70 nations

While abroad, scholars serve as goodwill ambassadors to the host country and give presentations about their home country at Rotary meeting venues and to other interested groups

Upon returning home, scholars share with Rotarians and others the experiences that led to a greater understanding of their host country

"The Rotary Foundation does some terrific things, not the least of which is the Scholarships program."
Michael R. Whiteman, International Programs Director, University of Idaho

Generous contributions from Rotarians worldwide represent a continued faith that today's Scholars will be tomorrow's community and world leaders.

Arthur is from District 1650, Vannes, France, studying for a DPhil in Cyber Security at Wolfson College, Oxford. Seven Stars

Christopher Chew and Navin Cooray will give us a progress update on their MSc in Global Health. Seven Stars 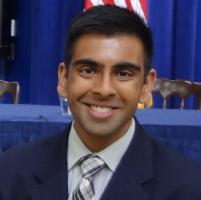 Rajiv Narayan is reading for an MSc in Medical Anthropology at Magdalen College, Oxford. Rajiv graduated in 2012 and worked with the US health care information firm Close Concerns, focusing on Obesity policy