History and background of The Rotary Club of Oswestry

Oswestry lies in a South Eastern corner of Rotary District 1180 which includes only 3 clubs in Shropshire, all in Oswestry: ours, our daughter club Oswestry Borderland and Oswestry Cambrian.

Granted its charter on 9th August 1929, the Rotary Club of Oswestry is well over 85 years old and the 14th oldest in the District.  Dual-gender since 2002, it now has 5 women members, one of whom, Rtn Jayne Middleton, was President for the year 2007/08.

We currently have 39 members and between us we cover many professions, including teaching, accountancy, dentistry, the law, music, journalism, farming, optometry, commerce and even a shepherd!

The Club is committed to serving its local community as well as supporting International initiatives further afield, with charities such as Oswestry MENCAP, Shelterbox, Institute for Cancer Research, Shropshire Voluntary Helping Hand Association, PolioPlus, Stroke Club, Midlands Air Ambulance all having benefited from our fund-raising efforts in recent years.

Our Community initiatives include organising the Oswestry Health Awareness Day in partnership with the local NHS Trust.

When our local hospital, the Robert Jones and Agnes Hunt Orthopaedic Hospital, holds its annual fete, we go along and run games to help raise money for their League of Friends and provide entertainment for visitors. Similarly, we assist the Derwen College (for people with learning disabilities) when it requires help with its fete. We try to respond to the needs of the local community.

For several years, one of our (now) honorary members, David Towers, was the lead Rotarian for the District Disabled Games event.  Many young, and not so young, disabled athletes take part in a wide range of sports from darts to archery, from cycling to cricket, from tennis to volleyball and even an inflatable assault course.  The partnership with Bank of America has seen the number of participants increase every year from the original 45 in 2001.

As trustees of a bequest from a local benefactress, the late Mary Hignett, the Club supports local projects by means of grants given to local organisations with a special interest in sports and the arts. Click on the link to the right to download Application Forms and Guidance Notes.

Since 2006, using funds from this bequest, the club has organised an annual Crucial Crew type event called LifeLine (Rhaff Achub in Welsh) which welcomes Year 6 pupils from both sides of the border to Park Hall, the home of Oswestry Agricultural Show. More than 400 young people from over 20 schools attended last year.  In groups of between 3 and 6 they move between 10 scenarios to teach them about keeping safe on railways, farms, in the home and when cycling.  They are encouraged to wise up about the dangers of drugs, strangers and the internet. Finally they witness a car travelling at 30 mph failing to stop until it has burst balloons representing children who misjudged the stopping distance. All the accompanying teachers praised the lessons learnt by their pupils.  The Rotary Club of Oswestry is very grateful to our project partners, the Police, Fire Service, HM Coastguard, the Red Cross, Tedsmore Model Railway Club and the NFU.

We also find time to have fun! As part of an extensive social programme, this year we are spending a long weekend with partners in Norwich as well as enjoying sporting and entertainment events of many kinds.  Our Club's Rotaventure initiative demonstrates another side of Rotary with which we are not usually identified - a sort of Outward Bound!

Through a collaboration with the local Oswestry School, including our Interact Club, thousands of pounds have been raised for charities both in this country and in Africa. Rotarians have worked with the school stewarding sponsored events such as swims and walks. Our members also go into the local maintained secondary school, The Marches, where we give interview experience to the Year 11s preparing to take their GCSEs and enter the world of work or go on to Further Education. Our youth works continue through our active Vocational Committee who run the Millicent Kaye Art Competition, Essay Competition, Youth Speaks Competition and the Investment Competition.

If this short description of life in Oswestry Rotary Club has kindled your interest, please contact us through the website or come to lunch and meet us, 12.45 Mondays (except Bank Holidays) at The Wynnstay Hotel in Oswestry. 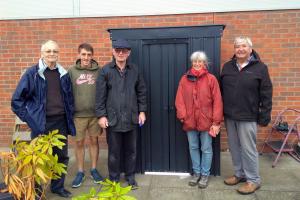 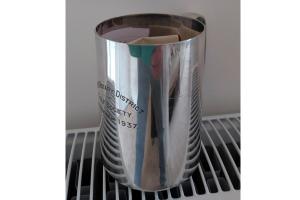 Mike Griffiths recently reported that Richard Anderson of Reading had sent a silver tankard that his Grandfather had won for a Rotary District Golf Tournament in Wrexham in 1937.