Where we meet & where we draw our membership from

Fishponds and Downend are two separate areas of the City and County of Bristol, England.

Fishponds is an outer urban area within the City of Bristol: whereas Downend is a suburb of Bristol in the unitary district of South Gloucestershire.

Downend is in the centre of the above map with Fishponds to the south-west and Emersons Green (meeting location) to the north-east.  Note the proximity to the motorway network as well as Mangotsfield Cemetery!  (Both providing effective escape routes.)

The two areas are served by junctions on the M32 motorway which itself connects to the M4 motorway (the principal East/West route from London to South Wales), and within 5 miles of the M32/M4 junction the M4 connects with the M5 motorway (the principal North/South route from Birmingham to Exeter).  The two areas are also served by the major central railway terminus at Bristol Temple Meads and, the closer, Bristol Parkway railway station based at neighbouring Stoke Gifford.

The Fishponds & Downend Rotary Club meets at The Langley Arms located at the residential area of Emersons Green: which is closer to Downend than Fishponds.  See our venue's street location map below. 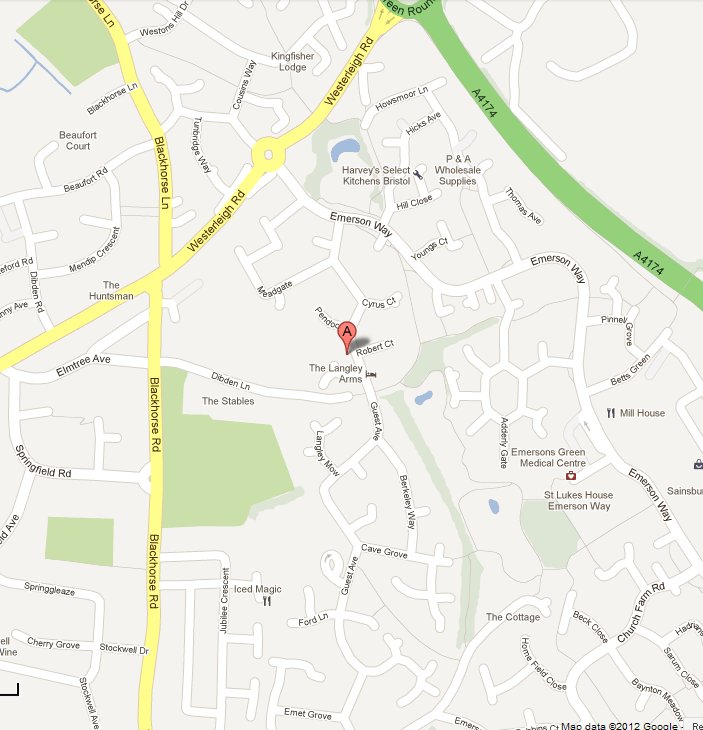 When our Club was chartered in 1963 it was called "Fishponds Rotary Club" because many of the Founder Members worked in the Fishponds area and the Club met in Fishponds.

In the late 1990s our Club changed from a lunch club to an evening club because the vast majority of Members were disposed to meet in the evenings.  The Member's demographic had also changed: fewer Members worked in Fishponds and many of the Members then lived in and around Downend.  The Club, reinforcing it's new identity, decided to change its name to "Fishponds and Downend Rotary Club".

The change of meeting time suited those who were retired but still busy during the day.  It also appealed to those who were still in business because longer lunchtimes became less compatible with commercial and economic conditions.  The catchment area remained the same but the majority of those attending now travel to meetings from home after work rather than at lunch time during the working day.

Today our Club's membership is drawn from a much wider geographical area than just Fishponds and Downend.  These other areas include Frenchay, Soundwell, Mangotsfield, Pucklechurch and Emersons Green: all shown on the map above.  In addition some members come from Pucklechurch, Winterbourne and Frampton Cotterell, which are just outside these areas, and other members come from further afield, from Yate, Pensford and Corsham (Wilts.).  Whether prospective members live or work in, or close to, our catchment area: it is probably more important that they are comfortable with the Club's service activities and events, and the fellowship to be enjoyed at our social events.

In taking the above into account there are, therefore, no strict geographical boundaries are used to qualify membership.   In saying this, anyone thinking of joining our Club may be advised to consider the distance to be travelled, and the time spent travelling, in which to attend regular Club meetings, and to participate in our Club's other local community based activities. 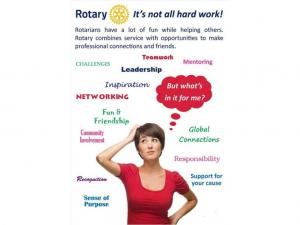 more Are you a potential Rotarian? 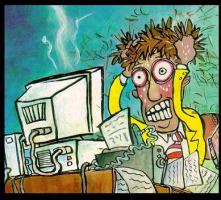 more Why you can't see what we want you to see. 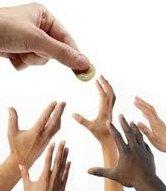 more Our supported charities. Although incomplete this article contains important information that needs to be on the web and working for us and our charities. As more information becomes available it will be posted. 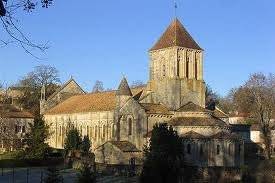 more Rotary explained: Where clubs 'sit' in 'R.I.', what 'R.G.B.I.' is & its function. How Rotary was started & its ongoing aims. How to contact, join & how much it costs. Rotary is often criticised for not providing information about itself: well not here!

more Find Out More Are you interested in finding out more about an Event, Making a Donation or Joining Rotary?