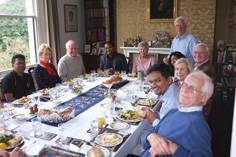 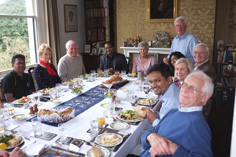 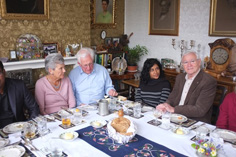 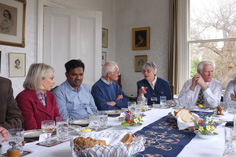 The International Committee had a difficult call this year:to host the incoming team from Sri Lanca on Good Friday afternoon.  A difficult call because most members had family commitments.  However Basil and Clare Dewing offered to host a lunch party and Sandy & Joan Gibson, Tony & Susan Lyons, Paul & Gillian Harris, Mick Wasley, Linda Foxall and David Street joined in.  Further complication was that the GSE team included Catholic, Buddhist and Muslim members so fish, vegetarian and halal dishes were needed.  Susan and Joan helped Clare by contributing dishes, the Zamzam Restaurant kindly supplied halal chickens and Clare researched the cooking requirements to comply with halal rules.

The GSE team of five arrived for lunch in Priory Road after having an exceptionally interesting morning, organised by Colwall Rotary, at the Morgan Motor Works.  After lunch, while the others cleared the lunch table and did the washing-up, Clare and David took the visitors for a walk round Malvern.  They went through Priory Park, over the bridge past the Victorian bandstand and into the theatre complex where they had a good look at the water clock.  Then they went on to have a tour of the Priory Church, parts of which date from 1085, looking at the medieval stained glass, tiles and misericord seats and the modern candle stand in memory of Walcher, second Prior of Malvern who, in the early 12th century, introduced use of the astrolabe and Arabic numerals to western Europe.  They were particularly interested in Tom Denny