1948. Bouncing up and down, I laugh as my mother lifts me high in the air giving me a better view of the open space in front of me. Although we are near the top of the stands, I realise years later that it had been a privilege to be here and it had taken my mother months to save up the money. The grin that fills my mother's face illuminates around the open air, her cheers fill my ears and as she jumps up and down I almost expect to come tumbling down off her shoulders. Her excitement makes me excited and when she places me down on the floor I can't quite stop myself from copying her over-the-top jumps and screams. When it is finally Peter Heatly's turn to dive my mother lets out a quiet squeal as the noise around me becomes minimal. Instinctively, I lift up a paper flag that I had been given upon my entrance and wave it frantically in the air. It's now silent and I want to scream again but I know that my mother would be angry, so I remain quiet. Heatly makes his way up towards the diving board. I can feel my mother shaking beside me, I presume it's because she is cold; although looking back years on I realise it is nerves. As Heatly takes a step forward, there is not one person in the crowd that is not focused on him. He dives towards the water and I realise in the stands of the London Olympics 1948 that this is my dream.

1960. The look on my face was different to every other person standing in the stands around me. My eyes were focused on the diving board; I was unable to hear the screams that I knew must have been there from the British fans that had travelled to Rome. It should have been me getting ready to dive, making my way up the steps, heart racing. Instead it is Brian Phelps who is slowly moving up the steps, one at a time. I can only look on as he reaches the edge of the board and prepares to take his Olympic moment. For the first Olympics since 1948, I look down as he dives- unable to watch him hit the water as the jealousy consumes me. The cheers are overbearing. I do not feel proud during the medal ceremony like I always have done before. Bronze. I could have done better. I could have got gold.

1964. Screams. The screams sound different when it is you preparing to dive, you realise how many people are expecting you to succeed when you hear the roar from the stands. My heart races. My whole body shakes. I cannot think straight. I have been waiting for this moment for sixteen years, I cannot ruin it now. Looking into the stands, my eyes rapidly scan the crowd for faces I recognise. My mother's face jumps out at me as the same old grin is plastered on her face. My nervous smile seems to excite her further and she leaps into the air. This is it. I repeat the same journey towards the diving board as Peter Heatly, Brian Phelps and all the Olympic divers in between. However, this moment is not about them - this fragment in time belongs to me. I am in the air only seconds, although the memory will last me a lifetime, before I hit the cold water. As I rise out, the pressure is gone and I can simply enjoy the glory of being here. Right now, I realise it does not matter whether I win a medal or come last; I am here. I am now an Olympic diver. I have achieved my dream.

2012. Surges of adrenalin pulse through my body as tension builds in the arena. The young boy rises higher until he is finally stood poised on the board, ready to fall gracefully towards the water. From where I am stood, I can almost see his eyes flicker shut as he tries to control his nerves. The nerves are mimicked throughout the arena, expectations high that Tom Daley will secure gold for The United Kingdom. It must be just seconds later, although it seems like longer, that he takes a step forward. My heart quickens its pace- to a speed I barely thought possible. As he dives, the weight is released from his youthful shoulders and he is able to twist freely through the air. No one dares to utter a word and silence descends upon the open room. Time seems to stand still as my eyes focus on the figure that is elegantly tumbling towards the awaiting water. With a light splash, the moment is over and the arena is alive with screams that I am sure would be heard from streets away. My eyes glaze over as tears fill my eyes, realising that this is the last time that I will be at an Olympic games.

Photographs of the winners of the local heat for the Rotary Young Chef of the Year competition, and of their endeavours. 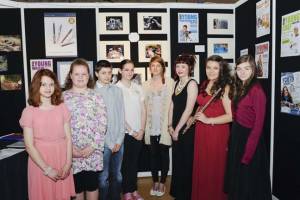