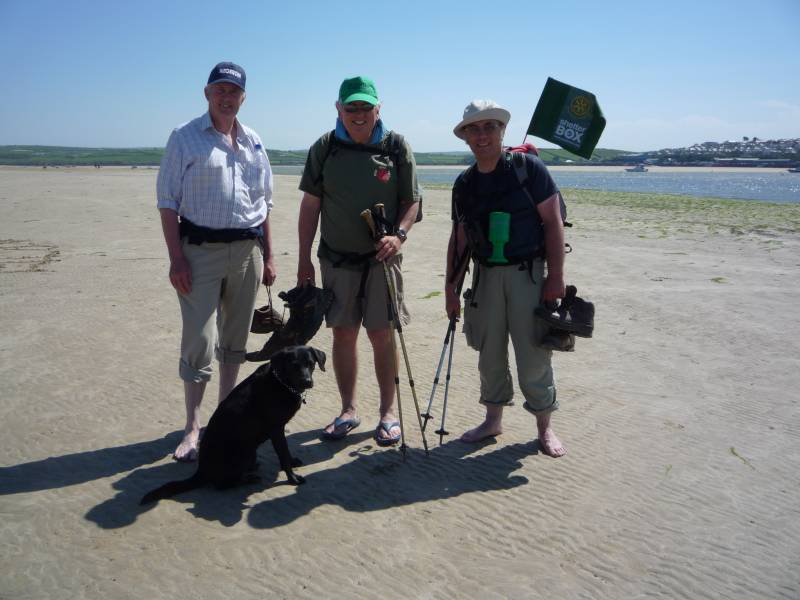 The Challenge continues, the 2 mad Rotarians, John Mellor and Tim Cook are now into their Jubilee Cornish Coastal Footpath Walk.  Day 4 was from Tintagel to Port Isaac and one of the harder sections of the path, the weather started cloudy but soon the sun came out and it was good walking to Trebarwith Strand where the tide was out.  We left Trebarwith Strand straight up the valley side via the 199 steps and after some level walking we were into a series of steep descents and ascents.  The flora in the valleys was magnificent with strands of Thrift, Cowslips and Spring Squill.  We walked through valleys that had been worked by man and he had left amazing structures in places.  We saw wheatears, gannets and nesting fulmars on the cliffs at Port Gaverne, where we were meet by Liz and Suki our back up team for the day and we all walked into Port Isaac in the glorious sunshine.  We enjoyed tea and cakes at the Cup Cake Tea Rooms.  Day 5 was from Port Isaac to Rock and it was glorious sunshine all day with the blue of the sky been reflected by the blue of the sea, there was a strong wind blowing which was good as out of the wind it was very warm and it created lots of white horse at sea .  As we left Port Isaac we saw their Jubilee bonfire been prepared.  Once out of Port Isaac the views opened up and we could see Tinatgel and Morewnstow to the north and Trevose Head to the south.  At Port Quinn we saw a group coastering we saw lots of other people out walking the coastal path during the day.  We saw lots more Sea Campion, Thrift and also Bluebells which we occasionally caught their sent as we walked past.  We saw the natural arch, called Lundy Hole.  At the old lead mines by Pengirt Cove, which is now a car park, we meet James who walked with us around Rumps Point, Pentire Point, Polzeath, where Jenny, Liz and Suki meet us and we all continued past Daymer Day and onto Rock, walking from Daymer Bay to Rock on the beach and at Rock enjoyed our drinks at the Rock Inn.  Day 6 was from Padstow to Porthcothnan and the easiest day so far. Jenny walked with us all day and Liz, Suki and jenny Jones walked with us from Padstow to just past Stepper Point.  It was good to have walking company.  The flowers were the best so far and we saw early purple orchid, Kidney Vetch, Common Vetch. Birdsfoot, Trefoil, Sea Campion and Thrift.  Saw nesting Fulmars, Razorbills and Guilmots near Trevoyne Bay, near the lifeboat station at Trevose Head heard and saw Corn Bunting, at Boobys Bay saw a couple of Dunlin whilst on the beach at Constantine Bay saw some Ringed Plover.  We saw and heard Skylarks all day long.  Saw a couple of Red Admirals butterflies during the day.  Todays walked meant we walked across a number of beaches.  We saw the 2 blow holes one at Trevoyne Bay and one at Trevose Head.  Trevose Head was a bit of a watershead, once past it we no longer got the views north to Tintagel and Morewenstow but got views to the south and the path we have still to walk and could see to Newquay and beyond including St Agnes Beacon.  We saw a considerable number of people walking the coast again today.  We arrived at Porthcothnan to be meet by Liz and Suki and enjoyed our refreshment stop at The Cornish Arms, St Merryn on the way home.  We are half way to our target of raising enough money for 6 Shelterboxes

John and Tim have already attracted a number of sponsor 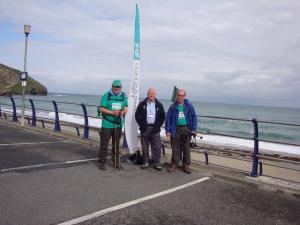 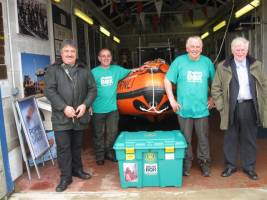 more The Challenge has began, Rotarians John Mellor and Tim Cook are on their way around Cornwall on the South West Coastal Path