The following is an extract from the speech made at our District Conference at Pitlochry by RI Representative Mike Webb - "What has been achieved and how close we are to eradicating Polio" Money is still required! 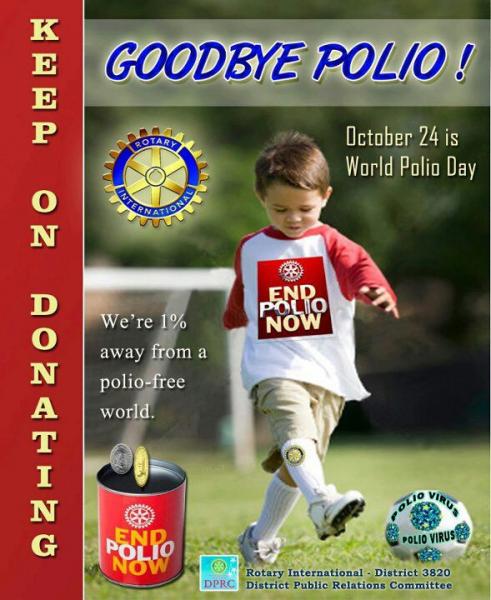 The polio eradication programme has been with us a long time.From that launch of the global initiative in 1988, 7 million people, mainly in the developing world, who would otherwise have been paralyzed, will be walking because they have been immunized against polio.

More than 650,000 cases of polio are now prevented each year by the efforts of governments and the partnership of the World Health Organization (WHO), Rotary International, UNICEF, the United States Centers for Disease Control and Prevention (CDC), and the overseas development agencies of donor nations.

The number of cases of polio has declined by 99% since Rotary launched the PolioPlus program.

A child can be protected against polio for as little as 50 pence worth of vaccine.

Since Rotary began its Polio Plus Program, the number of countries which continue to be polio endemic has declined from over 125 countries in 1985 to 3 countries in 2012.

Since 2000, there have been 21 episodes of circulating vaccine-derived poliovirus (cVDPV) resulting in 547 polio cases over that 12 year period

During that period, over 15 billion doses of Oral Polio Vaccine have been administered to more than 2.5 billion children, and as a result more than 3.5 million polio cases were prevented.

If routine or supplementary immunization activities are poorly conducted, the population is left susceptible to poliovirus, whether from vaccine-derived or wild poliovirus.

Hence, the problem is not with the vaccine itself, but low vaccination coverage. If a population is fully immunized, they will be protected against both vaccine-derived and wild polioviruses.

Polio eradication has been a wonderful campaign, much success has been achieved, but we must not relax in our fundraising now that we are so close to the desired result.

The $200 million Gates Challenge to Rotarians of the world was to be raised by 30 June 2012, to date Rotarians have raised a staggering $221m to be added to the $350m donated by the Bill Gates Foundation.

A big push now to raise the funds to complete this work is within the bounds of all clubs and rid the world of this crippling disease.