The new meeting arrangements are now working well and will continue for the foreseeable future.  Meetings take place at The Eight Bells on the 2nd Tuesday and 4th Thursday of each month at 12.30 for 1.00 pm. There is a two course meal with coffee.

Hadleigh Club celebrated the 40th anniversary of the granting of its Charter in February 2018 by having lunch at The Swan, Lavenham on 22nd February.

Rotary Foundation, one of the largest charities in the world, also turns 100 this year.  Foundation, working mainly through local clubs, improves the life of many third-world countries by providing clean water, better education, encouraging self-sufficiency through agriculture and animal husbandry.  It also runs university peace programmes seeking to produce diplomats and peace ambassadors for the future.  It encourages universal understanding by arranging educational and social exchanges between young people around the world.  In recent years it has been at the forefront of the fight against polio, commencing in 1985 when there were 1,000 cases a day in 125 countries, up to last year when only 35 cases were reported in 3 countries - Nigeria, Pakistan and Afghanistan.  India is on the brink of being declared polio free.  During the last 30 years many Rotarians from this country have visited polio-ridden countries to help with the massive task of vaccinating all children, and this has been a major success.

Over the years Hadleigh Club has assisted by raising and donating funds to the polio campaign as well as many more international causes, including the terrible disasters which frequently occur. This year 1000 purple crocus corms were planted by our club outside Partridges.  In addition, many local charities and organisations have been helped by donations, mainly from the popular Christmas collections.

Membership - we are a small Club and would welcome more members.   There are no longer any attendance or dress rules.

Organisations supported with fundraising between 1997 and 2022 Local and International 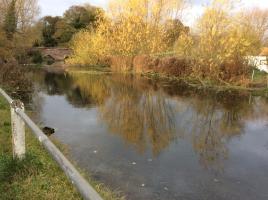 What Hadleigh has to offer