Honorary membership was conferred on Dr George Caithness with the presentation of a framed certificate and tribute by President Jim Macgregor and former Moderator of St Andrews Presbytery David Murdoch. 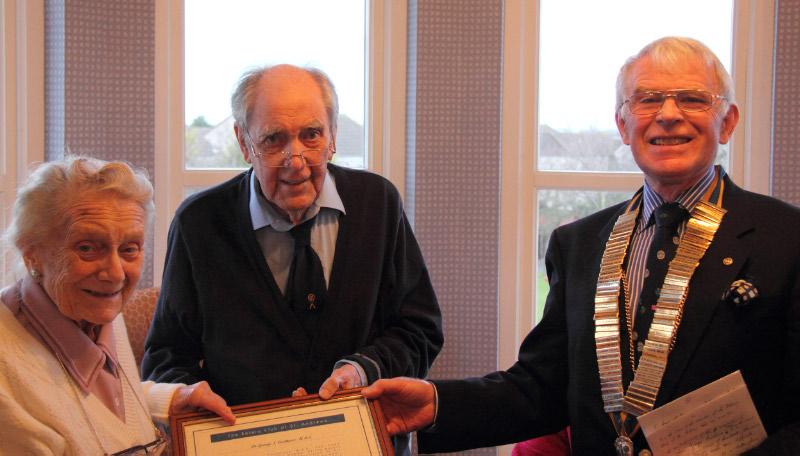 Originally from Perth, Dr Caithness was awarded an MBChB by the University of St Andrews in 1947. After National Service he became a registrar in gynaecology in Dundee working with Professor Margaret Fairlie.

He came to St Andrews in 1951 as an assistant and later partner to Dr Norman McLeod and carried out a great deal of dedicated work at Craigtoun Maternity Hospital.

He married his wife, Irene, in1953 after meeting her at a dance class. She is well known to St Andrews children as the gym teacher at Madras College.

George was the first Chairman of the Hospital League of Friends and has been a valued member of the order of St John since 1985, as well as an elder of Holy Trinity Church. He was awarded the MBE in 1990 for services to the local community.

George joined the Rotary Club of St Andrews in 1961, was President in 1967-68 and then District Governor in 1975-76. During this time George and Irene visited conferences in Baton Rouge and Montreal.

George worked tirelessly for Rotary and was instrumental in forming the Rotary Club of St Andrews Kilrymont.

The Doctor himself summed up his life in St Andrews at the time of his golden wedding anniversary in 2003 when he said  "It just goes to show, that, after 50 years in the town we are perhaps no longer considered outsiders!  Although it is many years since I retired, the fact that I helped deliver many St Andrews children, and Irene taught the rest, means we still know just about everyone.  St Andrews is a marvellous town."

Archive of Club Newsletters and Bulletins

more Ian Johnston came across this article about the beginnings of the club. our Our thanks to member John Black who has posted the original 'Saint' bulletin on the club website.