Recognition for our achievements. 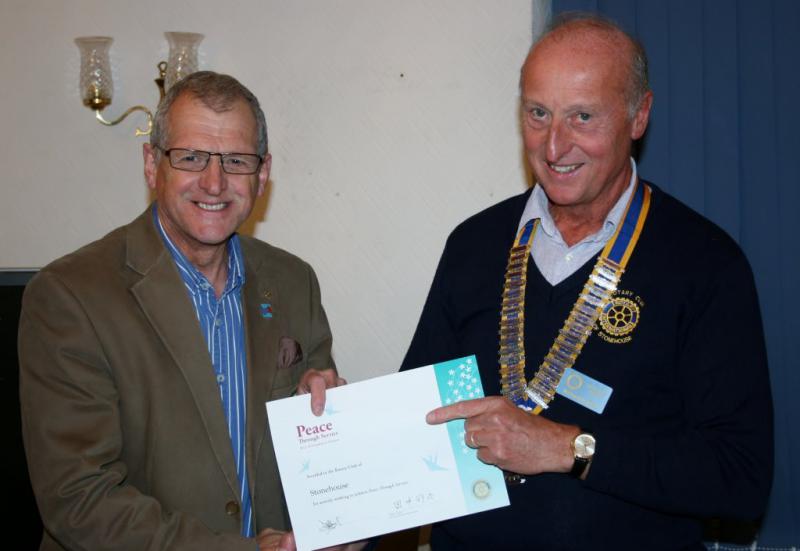 The Club was recently given the honour of receiving the RI Presidential Citation 2012-13.   It was presented by  Past District Governor David Houghton.

This award is in recognition of the Club meeting a range of goals and targets as set down by RI President Sakuji Tanaka 2012-2103.   His mission statement or his year was  "Peace Through Service"

These attainment targets focus on making a significant contribution to the Four Avenues of Rotary Service.  For example:

In Club Service we were able to demonstrate that we ran a vibrant website and social media preence, and that our meetings were distinguished by "great fellowship and a stimulating Club Service programme".

Our Community Service scored highly with the Club initiating several significant local community projects which have "improved the public image of Rotary in the community and also increased the pride of your Club members".

Internationally, we gave significant support to the RI End Polio Programme and developed a range of other programmes including one which benefitted from a District Simplified Grant.

In our Vocational Service the Club recognised the importance of high ethical standards and public values.

more An opportunity to help Rotary's projects and efforts

Award of the Rotary President's Citation

back The Rotary Club of Stonehouse. Demonstrating the relevance of our work to the local community via Press releases and general Public Relations.