Since making the pledge in 1985 to eradicate polio - its most ambitious programme to date - Rotary International in partnership with health agencies has brought the number of cases of polio down by 99 percent.

Where there were 350,000 new cases of the disease every year, there were just over one thousand by the end of 2010. This last one percent must be wiped out to make sure no child falls prey to this paralysing and sometimes fatal illness. In 2013, just 3 countries remain endemic with the polio virus - Nigeria, Afghanistan & Pakistan.

Polio continues to be an issue which is of great concern across the world and has not escaped the notice of world leaders. Millions of dollars have been pledged to the Global Polio Eradication Initiative.

Be part of the polio eradication initiative and help save a child's lifeby getting involved with your local Rotary club activities or donate now. 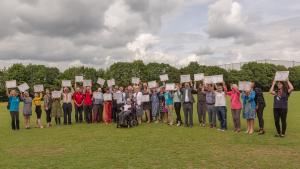 The Tree of Light