A full Rotary Youth Service programme is under way in Corby and the surrounding district. This includes Rotary Stars and Youth Exchange plus emphasis on Rotary programmes such as Young Chef, Young Musician, Young Citizen and Rota Kids.

The club has only recently entered into youth service projects but we dipped our toe in the water this year by sponsoring one STEP (Short Term Exchange Programme) candidate Lucie Gauvrit who was at the time a Year 11 student at Bishop Stopford School in Kettering.

Lucie took part in an exchange with Gaia Oddera, a student of the same age from Genoa, an exciting city on the coast in northern Italy. Lucies Youth Exchange was facilitated by our own club; Corby Phoenix Rotary and Gaias local club; the Rotary Club of Genova San Giorgio. Lucie visited Italy for three weeks in June visiting many of the attractions in the area and taking in the local culture. In return, Gaia visited England to stay with Lucies family in Finedon. They visited many of the local attractions and went further afield to Cambridge, Stratford-on-Avon and, of course, London. Gaia is a keen golfer and managed to fit in a round or two of golf while she was here.

When Lucie visited Italy, she took with her the club pennant, letters of greeting from the District Governor at the time and our then President, Peter Brotherton, as well as STEP badges and insignia.  Lucie and Gaia visited our club in July and brought with her as greetings from the club pennant from the Rotary Club of Genova San Giorgio.

It is the clubs intention to pursue some of the elements of the total Youth Service Programme which are straightforward and which we can implement over the year :

CoAs Corby Phoenix has already become involved in the Short Term Exchange Programme by sponsoring Lucie Gauvrit, we would seek to develop this area of Youth Service further.

We intend to contact at least two of the four secondary schools in Corby (Brooke Weston Academy & its sister school, Corby Business Academy) at the start of the September term to arrange a visit and presentation by Rotarian Colin Yarwood who is responsible for the RYE and STEP programmes within our local Rotary District. It is hoped that a member of Corby Phoenix will accompany him on these visits.  It is anticipated that this will generate interest in the two programmes for next year.

We also intend to develop further the Rotary Stars programme which recognises and rewards primary school age children for acts of good citizenship, through contacts with Primary head teachers in the Corby Borough.

When visiting the secondary schools, we shall promote the various competitions on offer such as Young Chef, Young Musician and the Young Citizen Award.

Longer term, we seek to establish, in at least one primary school, a Rota Kids project.  This project introduces young people aged 7-12 yrs to Rotary ideals and is also a useful fund-raising project.

Membership of Rotary needn't conflict with personal and working lives

Just to prove that not all Rotary members are stuffy! 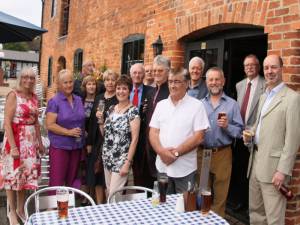 Belonging to the Corby Phoenix Rotary club provides a whole selection of events planned by club members - from dances to walks, visits, dinners, dances and much more. Watch this space for much more to come.

A full Rotary Youth Service programme is under way in Corby and the surrounding district. This includes Rotary Stars and Youth Exchange plus emphasis on Rotary programmes such as Young Chef, Young Musician, Young Citizen and Rota Kids.

Over many years Corby Phoenix has taken children with special needs to Wicksteed Park in Kettering for a day of enjoyment and absolute fun. And this year was no exception. In glorious sunshine, our kids and Rotarians alike had a great time