Over 90 Years of Working for Kirkcaldy

Excerpts from the club archives giving a flavour of the club's history. 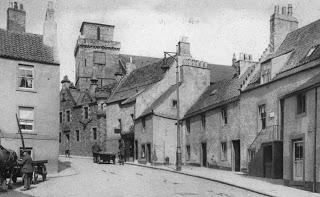 HE WAS rather portly; two twinkling, dark eyes looked over the dagger points of an adroitly waxed moustache; he had a bubbling sense of humour; he was, in his own way, dynamic; he was Oliver Melville, founder of the firm of Kirkcaldy electricians, and, of more importance so far as we are concerned, founder of the Rotary Club of Kirkcaldy.

Kirkcaldy in 1921 ... the tram cars swung along the High Street whose business premises bore names which have long since been engulfed by the multiple tide; the shops in Whytescauseway had not long taken the place of the high, grey wall which surrounded Whytehouse grounds where the drabness of the wall was broken by the almost macabre case of false teeth which indicated the adjacent premises of Mr Reid, the dentist. Further up, the Palace Cinema alternated films (with variety turns and you could buy the best seat for a modest nine pence. Across the way, Tylehurst, the home of the Hutchisons and now part of the site of the Town House, maintained its seclusion behind another high wall and the trams creaked stridently as they negotiated that particular corner.

Municipal affairs were conducted in Gibson and Spears office at the corner of High Street and Tolbooth Street where the Clydesdale Bank stood for generations and the Council met in the Town House, which is now Marks & Spencers, with John Archibald, the Depute Town Clerk, exercising a guiding hand. Town Clerk William Macindoe lived in an adjacent flat. His attendances at Council meetings were not particularly regular. One remembers an occasion when a nice point had been raised in debate. John Archibald was sent to summon him. He returned with the news that Mr Macindoe was in bed and did not propose to get up!

Kirkcaldy in 1921 ... leisurely by present day standards; parochial enough so that one might walk along the High Street and recognise seventy-five percent or more of the passing faces; a place which most people, sniffing the pervading odour of boiled linseed oil, found extremely pleasant but with a certain stirring of the agreeable shape of things to come. One particular shape which was later to present itself was a swimming pool which was turned down because of the excessive cost of

Over 90 Years of Working for Kirkcaldy sub-pages: 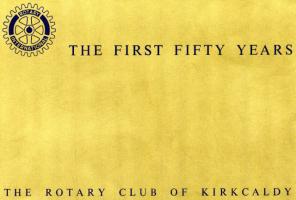 more In 1972 the club celebrated its Golden Anniversary by publishing a brochure charting the first fifty years of the clubs existence.