Our last Weekly Meeting of this calendar year and an important one! 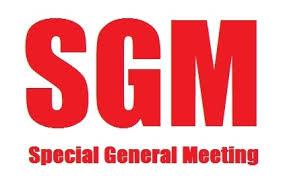 The Club held its annual Special General Meeting (SGM), the purpose of which was to approve the minutes of the previous SGM, to approve annual accounts for the last Rotary Year (2012-13), to appoint scutineers if required, and to elect a voting delegate and substitute to vote at the next annual conference.
The above business was concluded successfully.

It was confirmed that the Presidency of the Club for Rotary Year 2014-15 (next Rotary year) will be shared between: