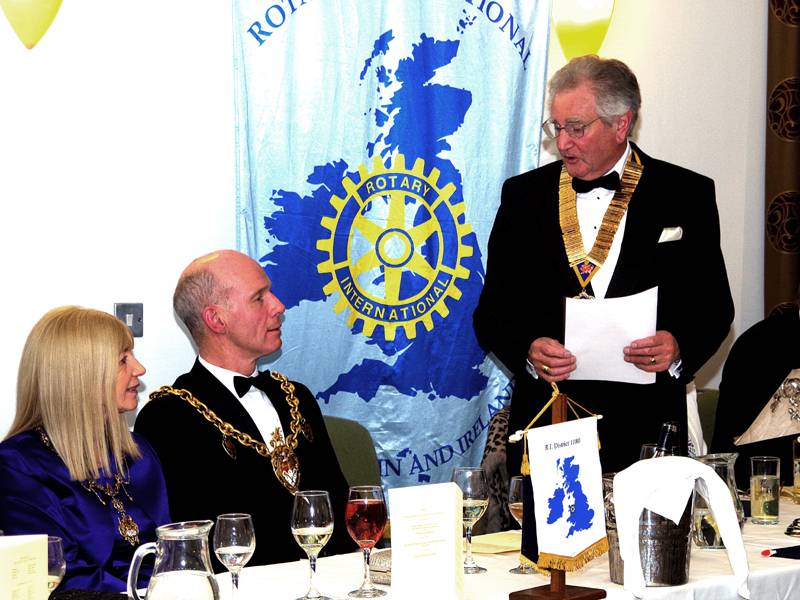 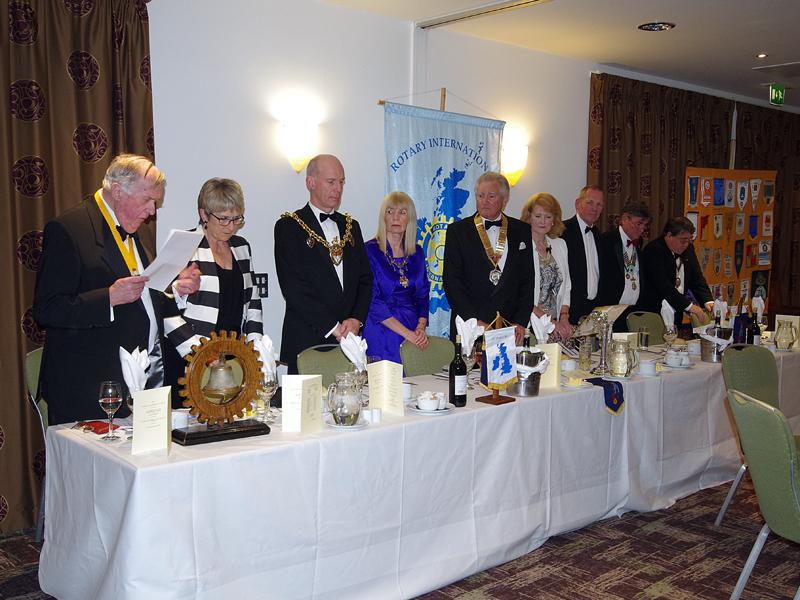 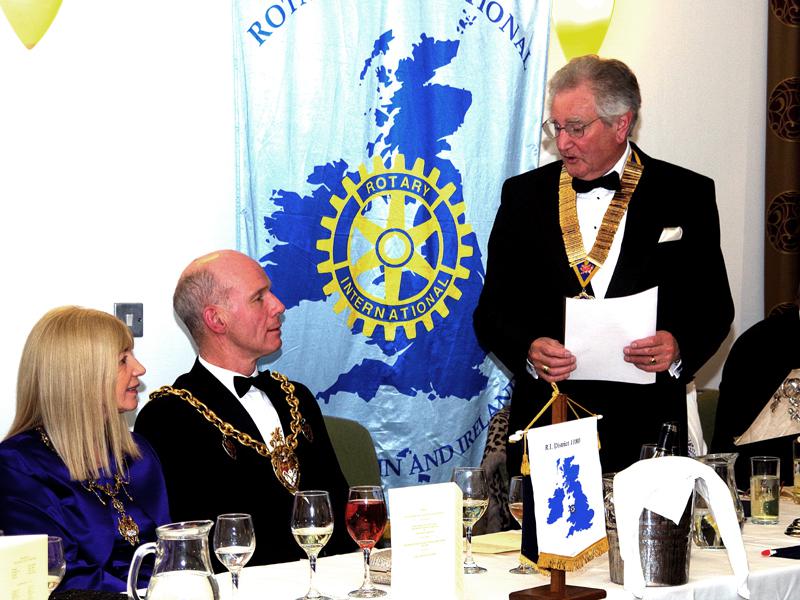 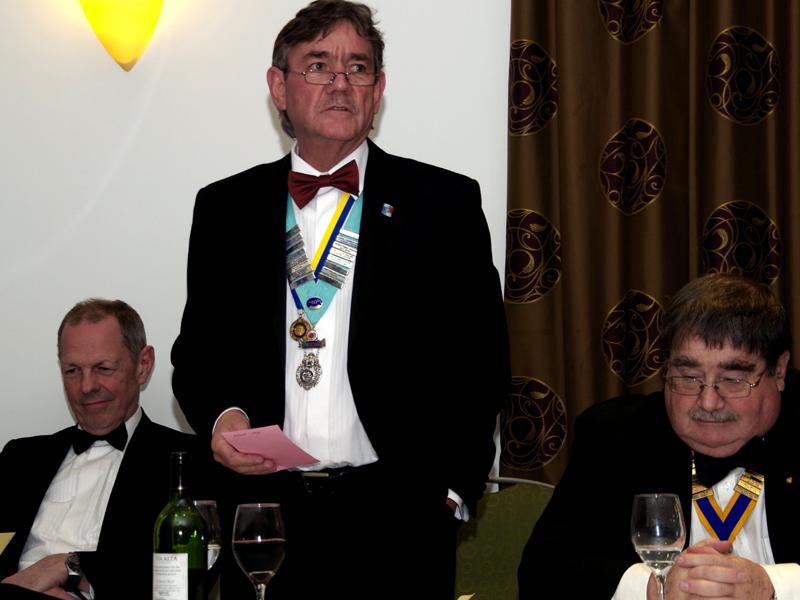 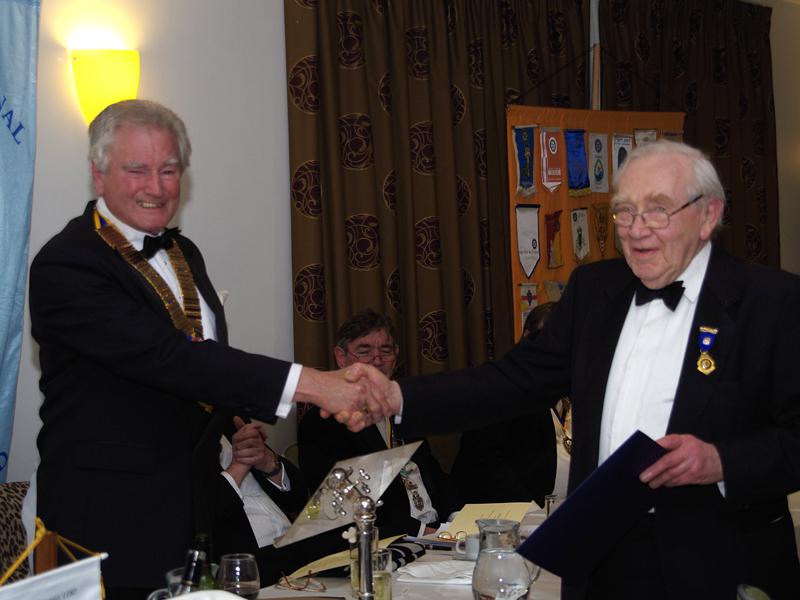 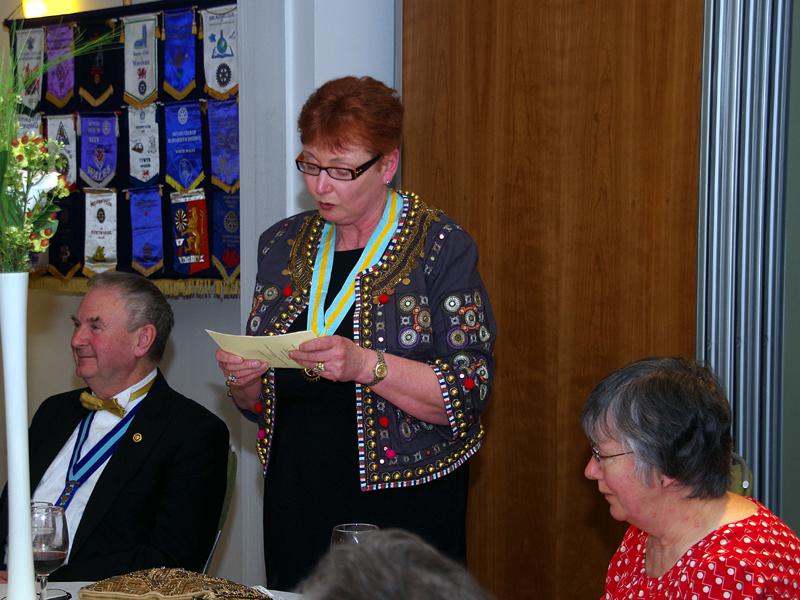 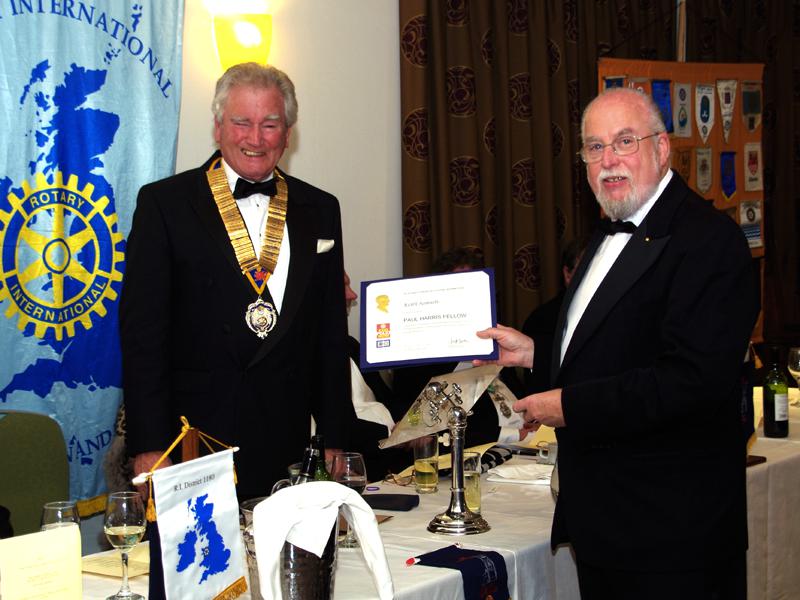 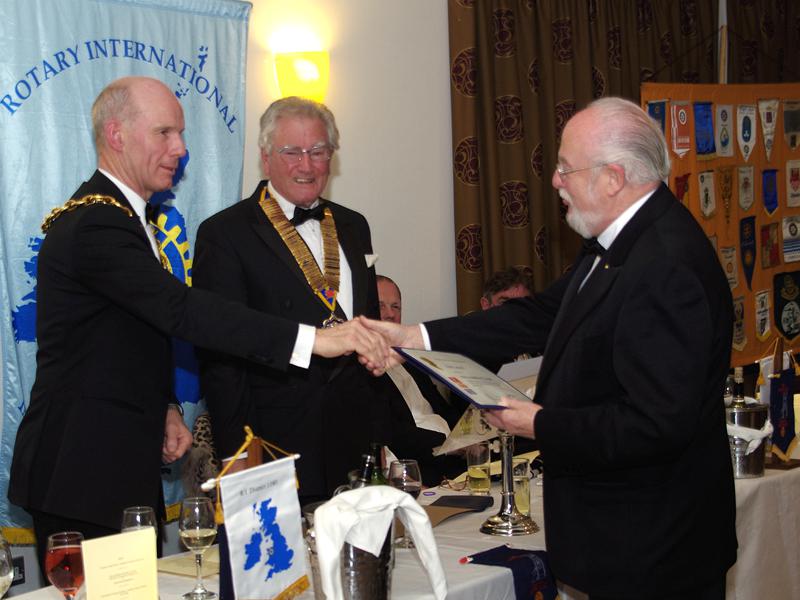 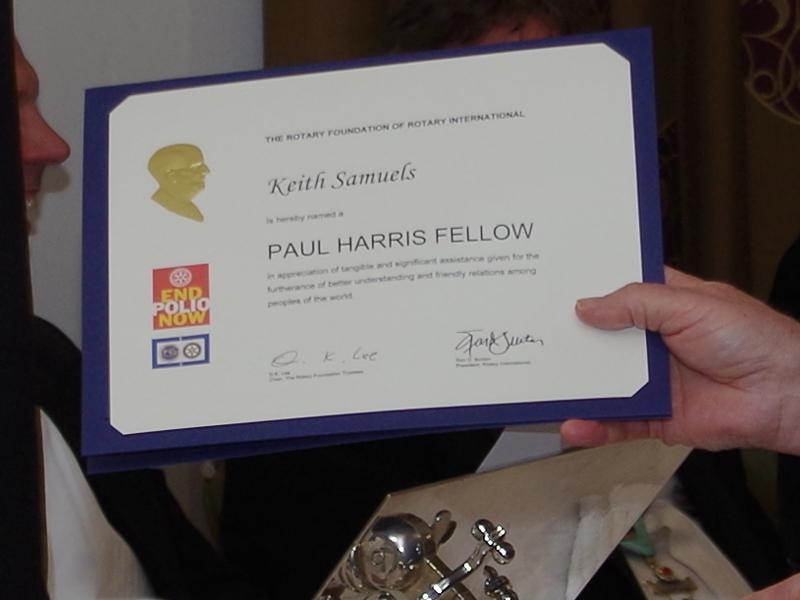 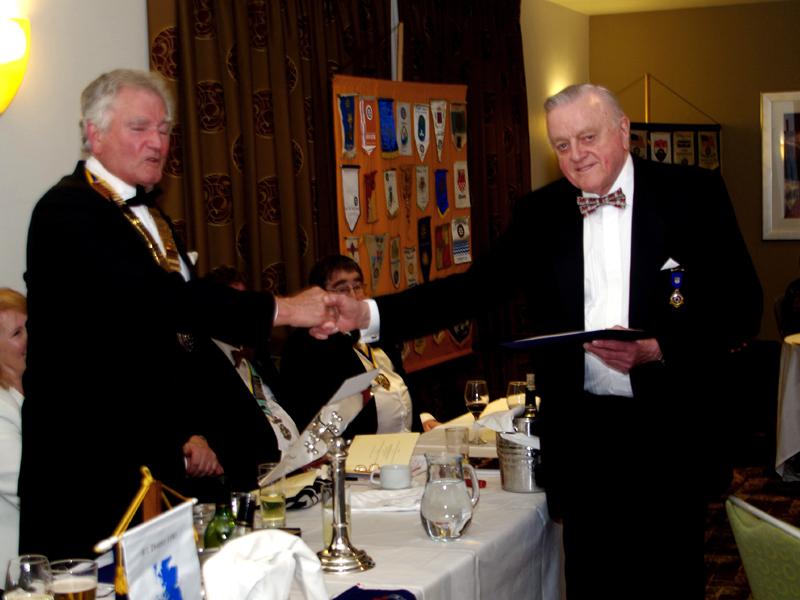 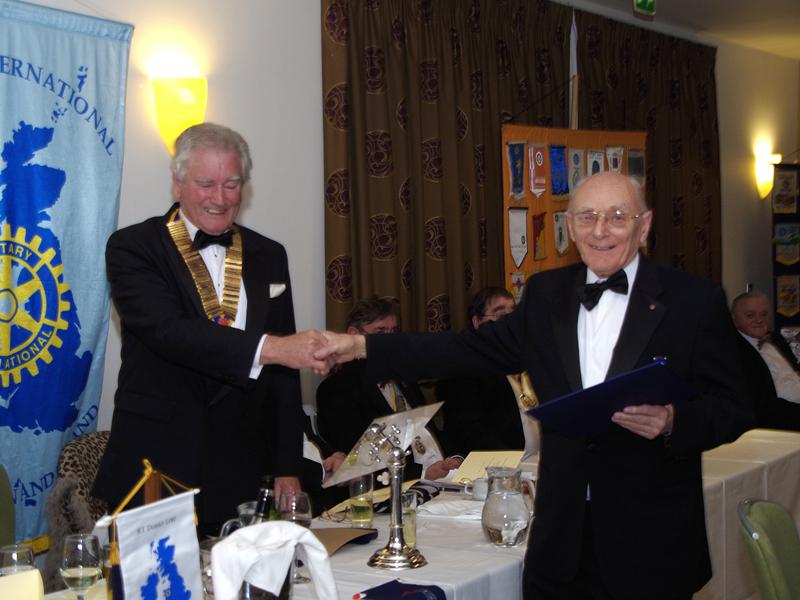 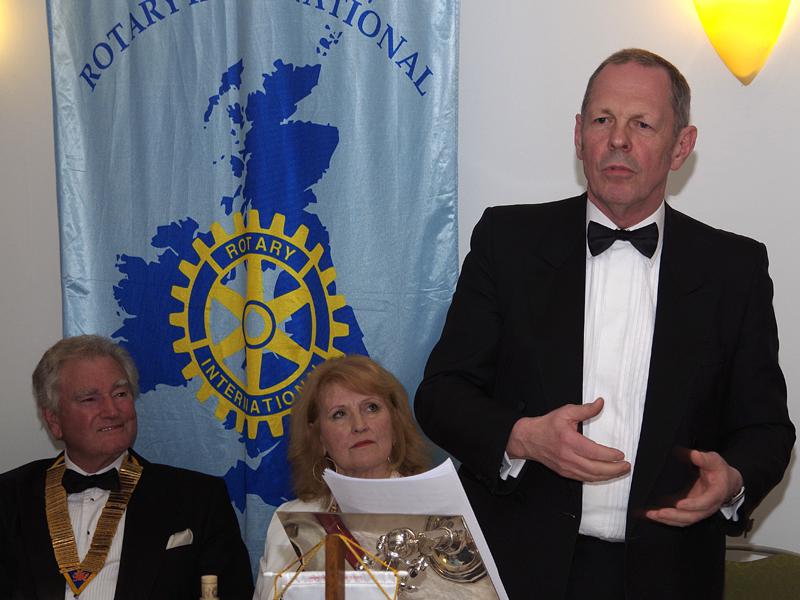 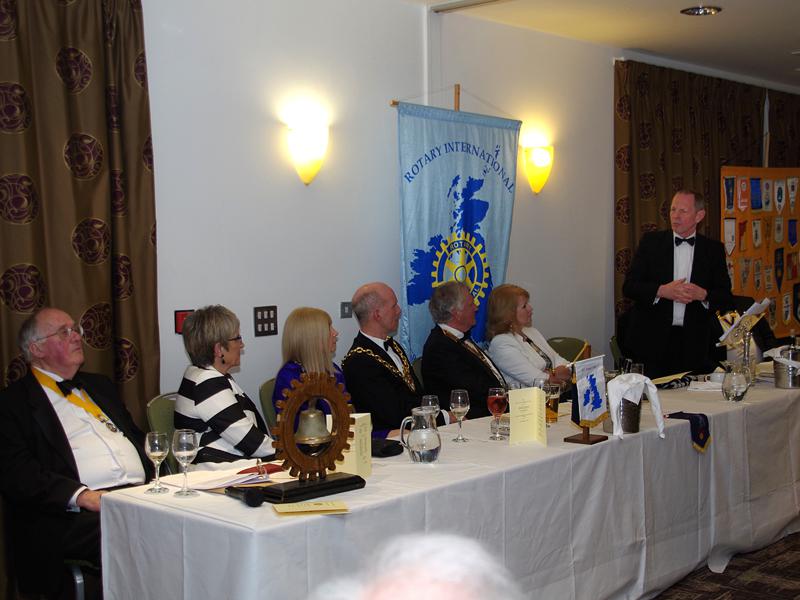 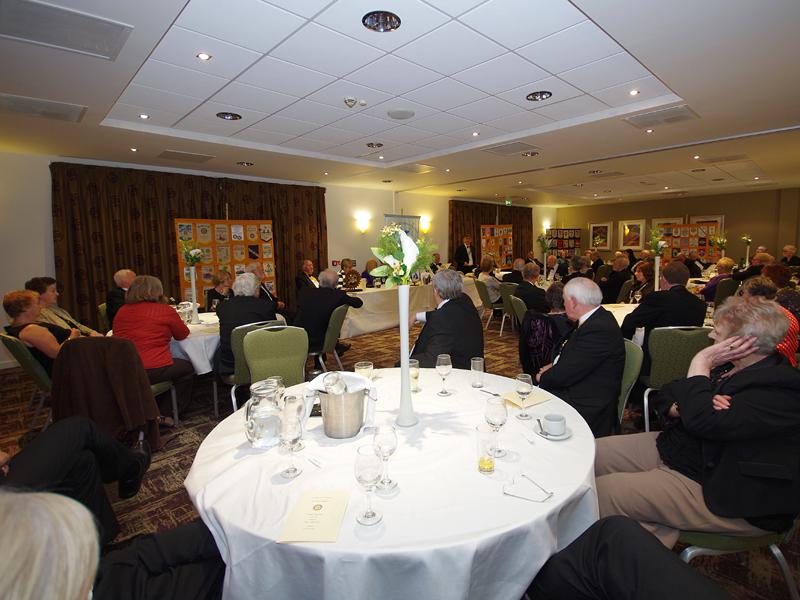 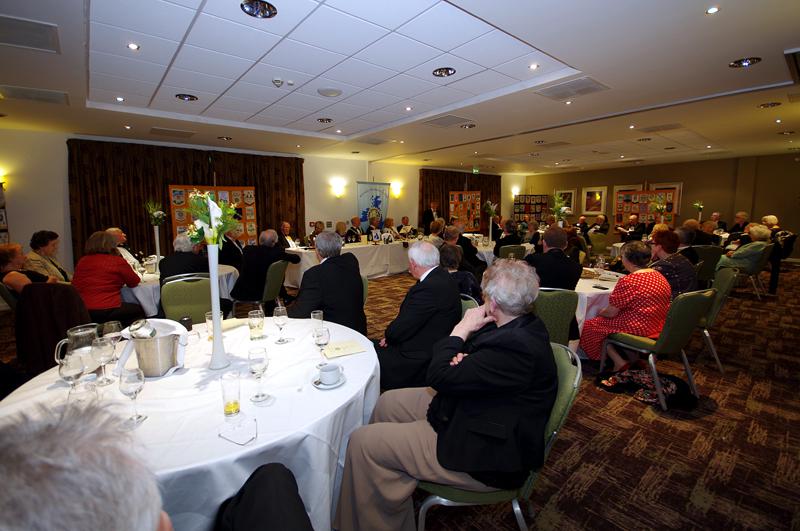 The Rotary Club of Wrexham

The Wrexham Rotary Club members and their guests enjoyed a successful and entertaining Charter Night Dinner on the 7th March.

Amongst the invited guests were the Mayor of Wrexham, Councillor David Bithell and the Lady Mayoress, Mrs Virginia Bithell, The Rotary District Governor Philip Horwood and the Assistant District Governor Beryl Cotton.

There were also representatives from other local Rotary Clubs.  After an excellent meal Past President Brian Davies welcomed the visiting clubs individually,  These were the Rotary Clubs of Chester, Heswall, Oswestry, Pwllheli, Saughall, Dublin North, Wrexham Erddig and Wrexham Yale. Also welcomed were the Wrexham Inner Wheel and Wrexham Lions Club.

A welcome and toast to the guests was proposed by President Peter Tompsett to which a response was given by the District governor, Philip Horwood.  He also proposed a toast to Rotary International outlining the many world-wide successes of the organisation.  He made the point that as world conditions change, Rotary is facing new challenges, but he was confident that Rotary clubs would recognise and respond to the challenges.

A toast to the Wrexham Rotary Club was proposed by Assistant District Governor Beryl Cotton, who enumerated the achievements of the club and the charities that it supports.  She said that unfortunately the club membership was falling, due mainly to demographics, but several schemes, including Friends of Rotary and a satellite club were being actively followed...  This was a common problem to many clubs.

Peter Tompsett proposed a toast to the Rotary Club of Cannanore Seaside Kerala, .  The Wrexham Club is twinned with the Indian Club and has supported a local childrens hospital over the years.

A surprise item on the programme was the announcement by the Club President, Peter Tompsett, of the award of Paul Harris Fellowships to four club Members.  The Paul Harris Fellowship is awarded to Rotary members who have made significant contributions to the Club, in particular long service or extraordinary fund raising activities.  The four members presented were Deri Thomas, who joined in 1966, Harry Bainbridge, who joined in 1969, Glyn Pryce who also joined in 1969.  The fourth award was given to Keith Samuels who, although a (relatively) recent member, has made major contributions to fund raising.  Each of the Recipients was congratulated and made a short acceptance speech.

At a later event, the same Paul Harris Fellowship was awarded to Orlando Andrade, who has been a

This formal part of the evening was followed by a talk for the Principal Guest, Robert Stones, Managing Partner of Peter Wilson Auctioneers who was introduced by the President.  He started by outlining how the practice of auctioneering had changed in recent years, mainly due to the internet which enables buyers in all  parts of the world to enter bids.  He also describes a recent trip to with a party of auctioneers from the .  They had been invited to present European antiques to establish the extent of the Chinese market.  He had been very impressed by the Chinese people who had entertained the group, but was not impressed by air quality.  On the whole the Chinese taste in antiques was very different from European tastes in that they were more interested in Arab, Russian and Indian artefacts rather than traditional European effects  The rules of auctions in were also very different to those applying in the , which caused some misunderstandings.

Robert Stone was thanked by Peter Howell, and Peter Tompsett brought the evening to a close with a final toast - Rotary and Peace the World Over 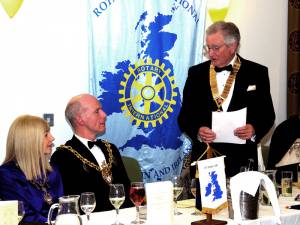 What we do locally