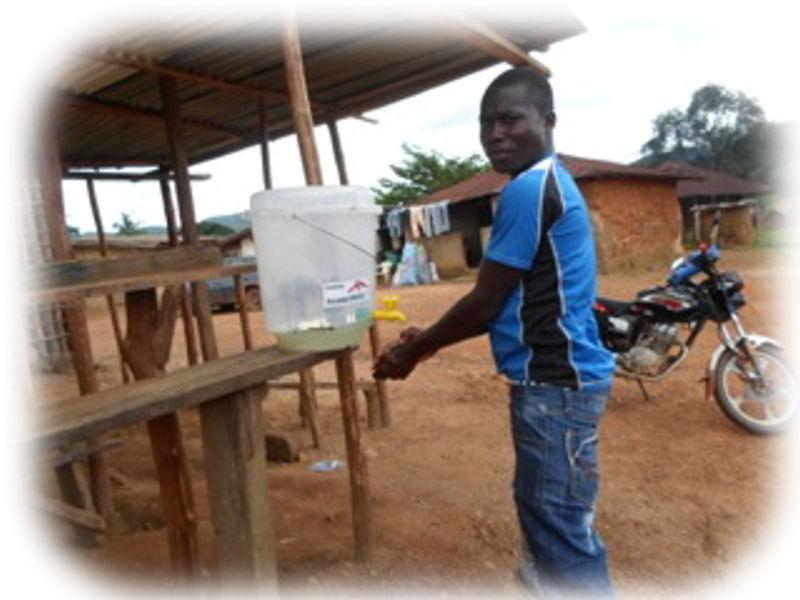 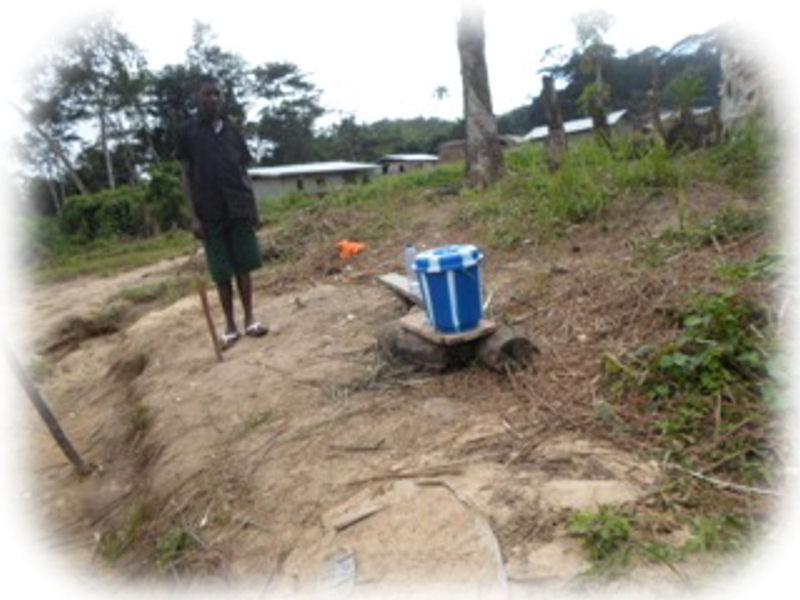 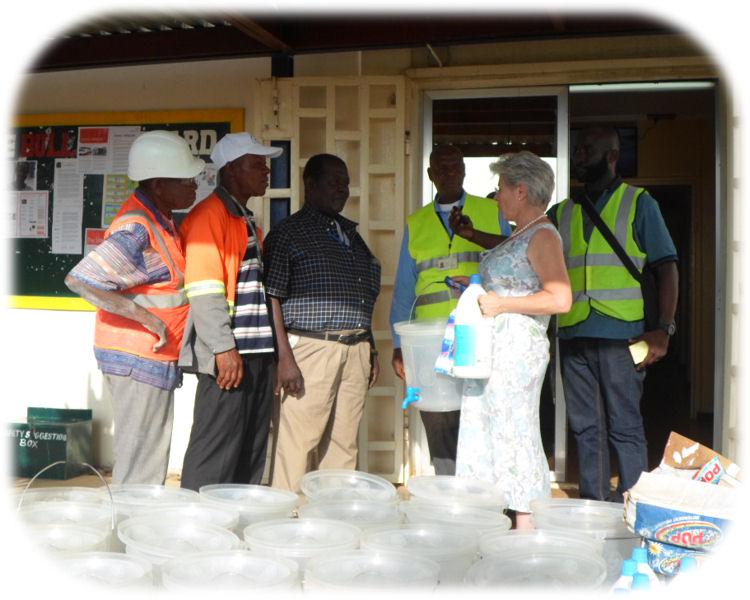 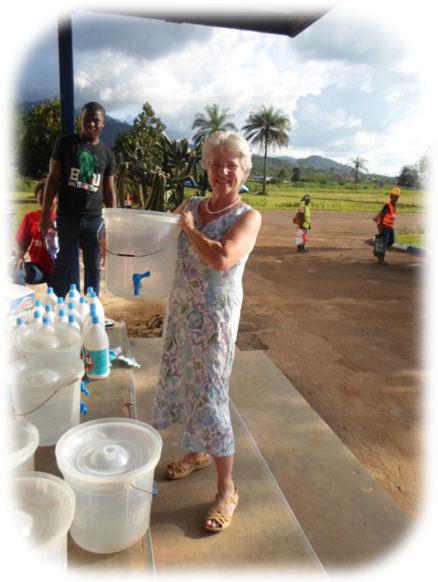 Ebola is killing people by the thousands in West Africa.

Ebola is burning down the already skeletal healthcare infrastructures in Liberia.  Many hospitals can no longer accept non-Ebola patients and there are not enough beds for Ebola patients. Doctors and health workers are dying. The Chief Administrator of the Catholic Hospital in Monrovia - the capital city - has died from the virus, as has the Chief Medical Officer at government-run J F Kennedy Hospital. There is a shortage of basic medical and sanitary equipment, clothing, food and bedding as well as a lack of basic services such as constant electricity, water, medicines and even reliable transportation.

Bodies are being left, there is no one to pick them up and houses are being placed under quarantine.  Families, who are already incredibly poor, find themselves near destitute, given that the clean-up process following the removal of an Ebola victim involves a total sterilisation of the house and the burning of all fabrics.  These already poor people find themselves without clothes, furnishings and bedding, often ostracized from the rest of the community because of this dreadful disease

YOU CAN HELP SAVE LIVES BY MAKING A DONATION. EACH BUCKET COSTS 10.

MAKE YOUR PAYMENT VIA OUR BANK ACCT:  CAF Bank

Minutes of presentation by Hilary Byrne on the 20th October:

Coping with the Ebola virus in Liberia Hilary Byrne

Hilary is a community development worker engaged in the resettlement of farm workers whose land is being purchased by ArcelorMittall, an international mining company. She has been thrust into the forefront of the battle to combat the Ebola virus in the numerous small townships in the area where she is stationed. Likening the virus to the Black Death Hilary spoke of the devastating effects of the disease upon a country wrecked after 20 years of civil war.

Hilary explained that in the townships most water came from streams, toilets were non-existent and hygiene was very poor.  Around 98% of the country had no form of sanitation. Proper sewerage was non-existent. Because of this she was especially grateful for the assistance given by Rotary in providing funds to purchase special buckets that could be filled with water, bleach and washing powder and located at strategic points among the population. As a result of this we have pulled Ebola back. It is easier to control in the rural areas. In the Monrovia slums the position is desperate. In the rural areas two people are infected by every one person who already has the virus; in the capital it is ten or twelve.

Customarily the death of a person led to all relatives washing the corpse, followed by a large funeral. Because of the outbreak it was unlawful to wash and bury a corpse.  All corpses were burned.

She operated a team of 18 who went into the townships and spoke to individual families, ensuring that they were familiar with the necessary precautions and checking the temperatures of inhabitants. Each family was given a poster setting out the basics of how to avoid the virus.

In an effort to deal with the acute shortage of trained nurses a number of specialist nurses had been imported to mount a training programme. The difficulty of recruiting personnel was understandable in the light of the fact that nurses and doctors were most likely to be infected and that, so far, about 5 per cent. of deaths had been of nurses and doctors.

The drive to raises hygiene standards had resulted in a drop in cholera, typhoid and diarrhoea. The message is getting through.

Hilary spoke of the work of the Rotary Club of Monrovia and asked that all our further efforts be channeled through it.  Thank you for the money you gave me. We have used it wisely and it has made a difference.

Replying to questions Hilary made the following points:

The local language was Mano, with a form of English being common

All equipment had to be imported. She was unsure as to whether redundant NHS material could be utilised

Coun. Elms said he wished to express the thanks of the community for the work of Rotary.

The President moved a vote of thanks to Hilary. 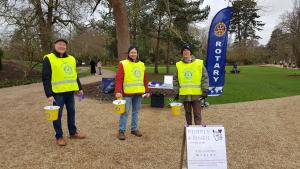 RHS Wisley opens its doors once again to Guildford Rotary Clubs to collect for the fight against polio. 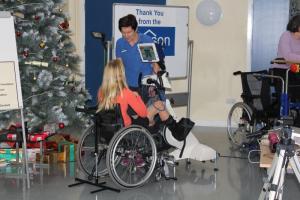 Rotarians from Kolkata(Calcutta) India, have sponsored, through The Rotary Club of Guildford, a 'Rotary Foundation Matching Grant Project' enabling the gifting of two pieces of equipment to assist the mobility of those affected by Multiple Sclerosis.

The Rotary Jaipur Limb project is a pro-active fund-raising and project-initiating body of Rotarians, drawn from all over Rotary GB&I (Rotary International in Great Britain and Ireland). It was formed in 1985 and became a registered charity in 1995. 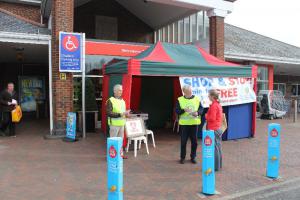 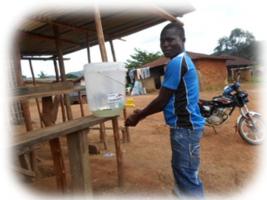