Celebrating and Sustaining a Polio-Free India

Thanks to support from the global community of supporters to end polio, India is celebrating its fourth polio-free year. The World Health Organization (WHO) certified the South-East Asia Region, home to a quarter of the world’s population, polio-free one year ago, today. The certification of the region marked an important step in polio eradication efforts. Now, 80 percent of the world’s population lives in certified polio-free regions.

Since the last case of polio in India in March 2011, the India National PolioPlus Committee’s “Keep India Polio-Free” campaign has continued regular immunization campaigns. These campaigns rely on the support of entire communities, religious groups, and political bodies.

The Global Polio Eradication Initiative partners (Rotary International, WHO, Centers for Disease Control and Prevention, Unicef, and the Bill & Melinda Gates Foundation) have committed to strengthen the routine immunization levels in the country to ensure that children are protected against polio and other life-threatening, vaccine-preventable diseases. Routine vaccinations include vaccines against diphtheria, whooping cough, tetanus, polio, tuberculosis, measles and hepatitis B.

The Indian government recently launched Mission Indhradhanush, an immunization drive to achieve its target of full immunization by the year 2020. The drive’s objective is to strengthen health systems for improved vaccine delivery. The drive will be implemented slowly throughout the country; first in 201 low-performing districts that have been identified for improvement. The first phase of the immunization campaign is scheduled for the beginning of April.

India National PolioPlus Committee chair, Deepak Kapur says, “It is an opportunity to close the immunization gap and ensure that those missed children in the country get a shot at life with these seven life-saving vaccines. The success of Mission Indhradhanush will ensure that no child remains vulnerable to polio.”

It is estimated that about 500,000 children die annually in India due to diseases that are preventable with vaccines. India’s PolioPlus committee hopes that the legacy of the systems in place for polio eradication will strengthen and support ongoing immunization activities throughout the country.

July 24, 2014 marks the last case of wild polio reported in Nigeria, the only remaining endemic country in Africa. While this milestone marks a major achievement for global polio eradication efforts, we must remain cautiously optimistic.

January 24, 2015 marked six months with no new cases of wild polio reported in Nigeria, the only remaining endemic country in Africa. While this milestone marks a major achievement for global polio eradication efforts, we must remain cautiously optimistic.

Nigeria’s total polio case count for 2014 remains 6, compared to 53 in 2013. The most recent case had onset of paralysis on July 24, 2014 in the southern Kano state. Polio case numbers in Africa decreased by 92 percent between 2013 and 2014. In 2013, outbreaks in central Africa, the Horn of Africa and Nigeria, left the entire continent at risk of polio

“Now we must be more vigilant than ever, as our progress is fragile," says Dr. Tunji Funsho, Rotary's PolioPlus chair for Nigeria. One of Nigeria’s greatest challenges in the eradication efforts was reaching children in hard to access areas and low levels of campaign engagement. The Expert Review Committee on Polio Eradication and Routine Immunization, the country’s technical advisory body, met this month in order to review current progress and to discuss what next steps will ensure a polio-free Nigeria.

Nigeria’s progress is at risk unless polio is ended in the other two countries where it also remains endemic: Afghanistan and Pakistan. Until polio is stopped in the remaining endemic areas, all countries need to maintain sensitive surveillance and high immunization rates to rapidly detect any importation of the poliovirus and minimize its impact. Now that 99 percent of the world’s population lives in regions certified polio-free, the goal of eradication is closer than ever.

The fight to eradicate polio gets an additional $34.8 million boost from Rotary in support of immunization activities and research to be carried out by the Global Polio Eradication Initiative.

The continued fight to eradicate polio gets an additional $34.8 million boost from Rotary in support of immunization activities and research to be carried out by the Global Polio Eradication Initiative. The funds will be used by the World Health Organization (WHO) and UNICEF for polio immunization, surveillance and research activities in ten countries, as well as to provide technical assistance to additional countries in Africa.

In 2014, the world saw significant progress against polio in most places. Nigeria – the last polio-endemic country in Africa – saw a nearly 90% reduction in cases in 2014 over 2013, with the last case recorded six months ago. In addition, more than half of the world’s polio cases in 2013 were the result of outbreaks in previously polio-free countries, largely caused by instability and conflict in countries such as Syria, Iraq and Somalia. These outbreaks appear to have been stopped in 2014 following special vaccination efforts in 11 countries, reaching more than 56 million children.

The exception to this progress was Pakistan, which saw an explosive outbreak which resulted in more than 300 cases in 2014, the highest number in the country in more than a decade. As a result, Pakistan accounted for almost 90% of the world’s cases in 2014. In 2015, Pakistan has the opportunity to reverse that trend and in doing so, help the world end polio forever.

The progress made against the disease in 2014, while significant, is fragile. Rotary’s funds will support efforts to end polio in the three countries where the disease has never been stopped: $8.1 million in Nigeria; $1.1 million in Pakistan and $6.7 million in Afghanistan.

Roll Out the Barrel

The Rotary Water Barrel is the INSTANT solution!

a new dawn - a vision of hope 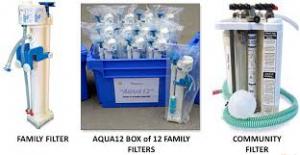 Aquaboxes take water filters and emergency supplies around the world, giving the gift of life to families and communities

748 million people "“ roughly one in ten of the world's population "“ have no choice but to get water from wherever they can, whether it's a dirty pond or an expensive water vendor

Faringdon Rotary give every year to Shelter Box