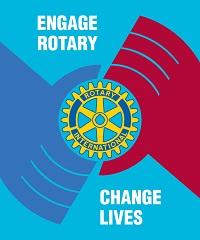 It proved to be a challenging 12 months; challenging in the sense that during the year President Lynn threw out some fund-raising challenges to various members who, in return, were entitled to issue one to her.  Funds raised by this scheme contributed towards a cheque for £3,000 presented to Swindon Young Carers.  That charity also benefited from a Zumba display by 3 male Rotarians, with members of the public joining in, on a Saturday morning in January in the Highworth Co-op.

Early in the year the President introduced Blunsdon the Bear to members and challenged those going away to take him along and keep a journal of his travels.  The furry creature almost came to a sorry end when he was taken to the District Rotary Conference in Bournemouth.  He was kidnapped and held to ransom by some Rotarians from Marlborough and the cost of his return was the necessity for President Lynn to attend a Marlborough Rotary Club meeting.

In excess of £18,000 was raised during the year by means of two concerts given by Pegasus Brass in Highworth Parish Church, a “Question Time” panel, a Kilometre of Cash in Highworth Market Place, a Charity Quiz in Lydiard Millicent Parish Hall, a Swimathon, selling Rotarian Terry William’s Christmas Trees, the Annual Golf Day and the previously mentioned President’s Challenges.  There was another very successful Young Musicians Competition.

The Swimathon at Next Generation Sports Centre raised in excess of £4,700 with the main beneficiary, the Prospect Foundation, receiving a cheque for £3,676.  The remainder was distributed to the charities chosen by the swimmers amongst which were Prostate Cancer UK, Uplands School, Headway and Wiltshire Air Ambulance.

In all more than £12,400 was donated to more than 14 charities.  In addition to the ones already mentioned £1,590 was given to Prostate Cancer UK, £1,250 to ATE Ghana, £590 to ShelterBox and £500 to the Philippines Disaster Fund.  Action For Children was also supported.

Social events for members and their partners included the usual visit to the Watermill Theatre, this time to see “Sherlock’s Last Case”, a weekend in Telford and The Ironbridge Gorge, a tour of the BBC Studios in Bristol, a post-Christmas lunch party, Fireside Suppers and, to round the year off, a very delicious Afternoon Tea at President Lynn’s home with some crazy golf on the “green” in front of her house.  As always, the Club entered the District’s Quiz and Skittles competitions.