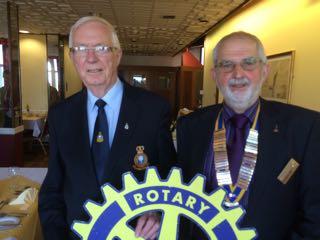 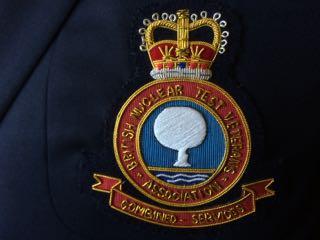 Our “in house speaker” on Tuesday, 20th October, 2015, was Rotarian Derek Houghton who began by reminding the membership that when he first joined Rotary some thirty seven years ago it was a tradition that new members were required to give a “my job” talk which thus enabled the existing members to get to know the background of the  new member.  He also stated that he felt everyone in the room had a story to tell and for his talk he would give details of his blazer badge which was for the British Nuclear Test Veterans Association.   Derek detailed the early part of his service in the Royal Air Force which was as a regular service man for three years, 1955 to 1957.   In the early part of 1956 the RAF required volunteers for service in Australia.   Not many details were given for the reason but Derek made application and was subsequently told,  by way of PWR’s,  that his application was successful and in early June 1956 he was posted to RAF Weston Zoyland in Somerset which was the transit camp for personnel  for a series of Atomic Tests in Australia.  The journey to Australia was by air and Derek gave details of the trip which included stops in Ireland, Newfoundland, New York, San Francisco, Hawaii, and Fiji.   Once in Australia the group, which were part of “Operation Buffalo” were stationed at RAAF Edinburgh Field near Adelaide.   The series of Atomic Tests was at Maralinga which was some 600 miles into the bush.    Derek, who was a Corporal Clerk GD, went to the forward area as part of the AOC’s staff and was an observer of the third explosion in the series, a midnight burst, on the 22nd October.    He described the effect of the blast and how it is embedded in his memory.   The morning after the explosion, which was from a tower, he flew with his Wing Commander over the site in a helicopter when he saw the vast devastation caused by the explosion.   Once the series was completed, in mid November the unit was repatriated to the UK by sea.   1956 was the year of the Suez crisis and the ship had to go round the Cape of Good Hope and eventually docked at Tilbury on the 21st December, thus completing Derek’s round the world journey in less than six months.    President Martin Keable thanked Derek for his talk and stated that he had  no idea what was to come after the opening remarks about speakers.