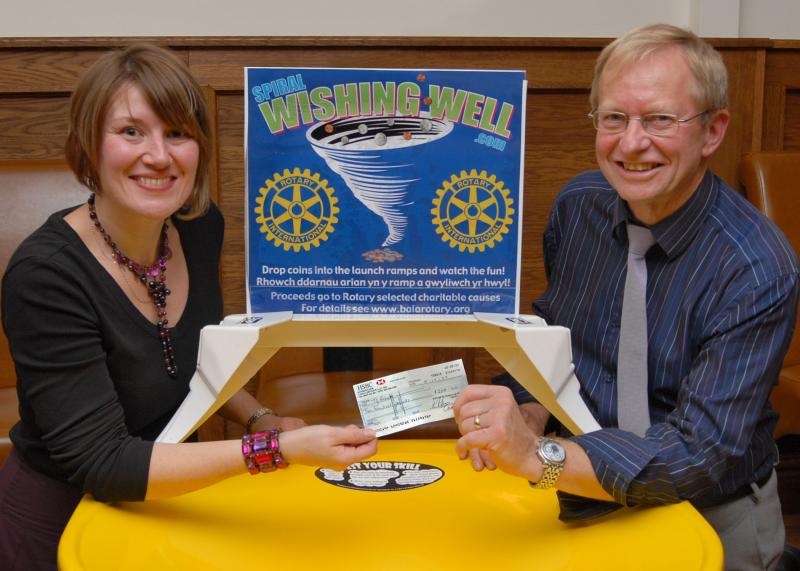 Our Rotary Wishing Well was delivered to us here in beautiful Wales by way of a chain of Rotary clubs handing the well along the route from Exmouth until it arrived here in Bala....... 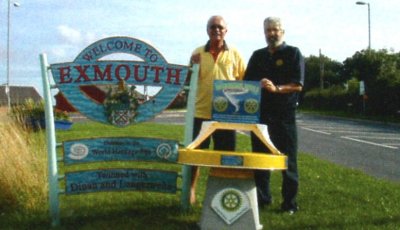 The Birmingham RI 100th Convention was a great source of inspiration and ideas for a Rotarian of five years standing, facing a year as President of his club in Bala & Penllyn. On the immediate horizon, within a month of taking office, the biggest event in a decade would be staged in the town - the National Eisteddfod of Wales - an unmissable opportunity to raise the profile of Rotary, recruit members in the Welsh speaking community of District 1180 and to raise funds.
The Convention demonstration of Spiral Wishing Wells by the Rotary Club of Exmouth caught the attention of the Rotary Club of Bala & Penllyn's new president who resolved to present the case for obtaining a well to his club at the first opportunity - the end of June handover. The problem was this allowed no time to prepare the members for the idea and to seek support in time for the Eisteddfod. In a daring and unpremeditated moment the gauntlet was thrown down - "Will anyone join me and share the cost of a wishing well or will I have to buy it myself?" Within a week 7 members had put forward the £1,235 to purchase and personalise a well and the order was placed. Problem solved.
The Convention had also been an inspiration to his wife, Hilary, who suggested a chain gang of willing clubs passing the well from one to another to reach Bala in time for the Eisteddfod and raise awareness of Spiral Wishing Wells in the process. With the aid of a road atlas, the RIBI Directory and email a series of 14 possible clubs were identified and contacted and a route and handover timetable created. The clubs approached out of the blue were delightfully willing and remarkably quick to rise to the challenge and join in the fun. Those who felt they could not participate suggested alternatives and before long adjacent clubs had contacted one another to confirm time and place for their handover.
The well is remarkably light, consisting of an attractive bright yellow funnel around which the coins race spiralling in toward the centre, a detachable pair of coin ramps integral with an information board advertising the club and the chosen charity, and a detachable base unit where the coins collect, and the whole device can readily be transported in a small hatchback or in the back of a saloon car.
Then, there was some excellent news - Exmouth were able to juggle their allocation list and advised Bala & Penllyn that the well to be dispatched to the heartland of Welsh language and culture could stay in Bala, hence solving the problem of the return journey to Exmouth.
During the Eisteddfod the club learned rapidly how best to deploy the well, the best fundraising day being that on which an enthusiastic 80 year young Bala Rotarian attracted numerous children and parents for noisy coin races full of fun and laughter.
The club are grateful beyond words to their colleagues who shipped the Well from Exmouth to the Eisteddfod, via Honiton, Ilminster, Shepton Mallet and Bristol and who helped launch the club's new venture. They now have a fixed location for the bilingual Ffynnon Gobaith, their wishing well, at their meeting place, Plas yn Dre Restaurant, High Street Bala. They trust it will serve them and those they serve, in the local community and beyond, for many years to come.
Adrian Murray - President, Rotary Club of Bala & Penllyn 2009

All funds collected in the year 2018 /19 were donated to Silver Star.