Club members have been actively involved in the Royal British Legion's Poppy Appeal. We manned a desk at Sainsbury's in Priors Road on 31 October and collected nearly £950.

In addition, a number of members helped with the distribution and subsequent recovery of Poppy trays and collecting tins from more than 20 locations in central Cheltenham. A total of £2,568 has been added to the amount raised locally as a result.

The money all goes to the Royal British Legion in the furtherance of its aim to provide lifetime support to past and present service men and women both locally and nationally.

more Minutes of meeting held on 8 May.

more The Royal British Legion have sent us a certificate in appreciation of the help we gave them with their 2018 Poppy Appeal.

more Minutes of a meeting held on 10 April

more Letter of thanks/receipt from Cheltenham and Gloucester Hospitals Charity

more Last year we sent Keenan Taylor, on the Rotary Young Leader's course (RYLA). This article, published recently in the All Saints School's newsletter, tells of Keenan's experience on the course

more Report on our distribution of Christmas Parcels 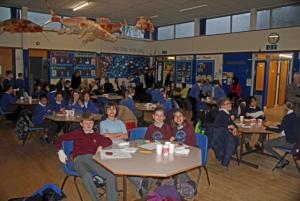 more On the 9th March, seven teams of four from Cheltenham Schools took part in our Rotary Primary Schools Quiz at Glenfall School. 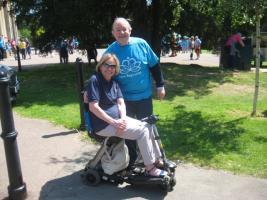 Walk a Mile in my Shoes

more On the morning of Saturday 23rd April the Club was stationed on the lower floor of the Regent Arcade to offer to take random Blood Pressure readings from passing shoppers.

more Here are the flyer and programme of events for the Midsummer Fiesta. We will be present in the market place from noon until 6pm 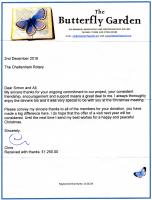 more A thank you from the Butterfly Garden for our donation from the Ten Pin Bowling Event.