President's Installation/ The Chindits Campaigns in India and Burma in 1943 and 1944,

Veteran of the Chindits Campaigns in India and Burma in 1943 and 1944, Stanley Puddifoot aged 98 years, took us through the two campaigns with the aid of maps and a marvellous memory. 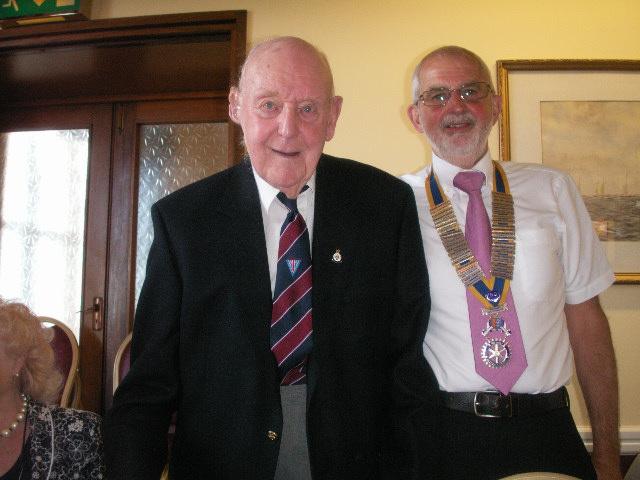 On Tuesday, 22nd September, 2015, we were honoured to have as our speaker a veteran of the Chindits Campaigns in India and Burma in 1943 and 1944.   Stanley Puddifoot who, at the age of 98 years, took us through the two campaigns with the aid of maps and a marvellous memory.   Stanley was a commissioned officer and served under Gen. Wingate who commanded the 77th Brigade.   On the 8th February 1943 the Brigade left Imphal, India, with approximately 3000 men organised into three columns, with 306 men each, and four Ghurka columns with 369 men each.   The Burmese Rifles and assorted other units added another 700/800 men.   Each column had fifteen horses and one hundred mules and each man carried a 60lb pack aside from arms.   On the 17th March Wingate crossed the Irawaddy River with his staff and was greeted by enthusiastic anti Japanese Kuchins.  On the 24th March Wingate was ordered to end the operation and he commanded his men back to India.  Some 2082 men returned despite being harried by the Japanese, especially at the river crossing, but only 600 were fit to fight again.   Wingate tried to form a second campaign.    Winston Churchill had heard of Wingate and wanted to meet him so he was taken off by train to meet the great man.    That meeting lead to his going to the USA where he met Gen. Arnold who had sufficient aircraft and Arnold agreed to make drops of supplies every five days and was also able to help with the evacuation of casualties.    The second campaign began on the 5th February 1944 when the 16th Brigade left Ledo on foot making for Burma almost six hundred miles away. This campaign was equally as bloody as the first with heavy losses of life.    The 16th Brigade built several strongholds at “Aberdeen” “Broadway” and “White City” and from there they were able to capture the town of Mogaung in June.   The war came to an end in August after the USA dropped ‘the bomb’ on Japan and the last of the Chindits were withdrawn from combat, including Stanley Puddifoot who came through the whole campaigns uninjured and who was demobbed in 1946.   Rtn. Arthur Bowles thanked Stanley for his extremely interesting and informative talk.     The picture shows Stanley Puddifoot with President Martin Keable. 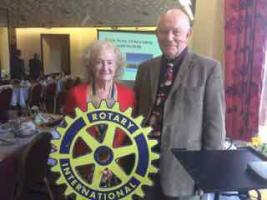 "A Jazz trip up the Yare to Norwich and back"

Roy Headland presented a trip from Great Yarmouth by river to Norwich, titled "A Jazz trip up the Yare to Norwich and back" . His presentation was accompanied with photographs and music corresponding to the various landmarks on the way.

Diana Staines from Centre 81 who gave a presentation of the Centre"™s activities.

The Centre was formed in 1981 (hence its name) and was set up to give assistance to disabled people who, at that time, had nowhere to go and the idea was to create a Social Club.

Shadrack Nyama, who is currently a Rotary Peace Scholar and is studying at the University of East Anglia, talked about coming from Kenya to further his education, in order to help keep younger pupils in school in Kenya.

Lunching on the Loire

Our 2015 Twinning Visit to Rambouillet