Jayne Biggs gave a presentation explaining her fund raising activities to provide life saving defibrillators to be fitted into schools and clubs. 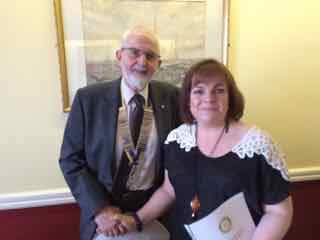 At our meeting on Tuesday, 12th april, 2016, we presented our annual Community Service Award.   The recipient this year was Jayne Biggs who has, since her daughter’s heart attack at the age of 7, almost four years ago, thrown herself into fund raising to enable defibrillators to be fitted into schools and clubs, anywhere there are numbers of children.  Since she started fund raising, almost three years ago, she has been able to place defibrillators in several schools locally and it is her intention to continue to do so until all the schools are fully equipped.  The defibrillators have a commentary which gives details to the user how to operate them and no specialist training is required, and no harm can be caused to a patient so long as the instructions are followed.   Jayne and her husband Tony have experienced the worst possible nightmare and their reaction has prompted them to raise money for the equipment which hopefully will save lives in similar circumstances to those of their daughter.  President Martin Keable presented Jayne with a Certificate together with a cheque for her Charity and she was thanked by Rtn Henry Dent for her presentation. 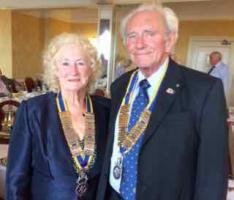 The installation of our new President for the year 2016/2017

Members and friends attended a dinner and enjoyed entertainment at the Gorleston Golf Club to say Thank You to Rotarian Martin Keable for his year of office as our President.

A nostalgic journey back to June l998.

Tom Pearce took us through a nostalgic journey back to June l998. That year with Tom, being the Immediate Past President at the time had organised the outgoing "thank you" to our President George Cooper.Tom had arranged a trip on the Broads Paddle