Twinning with Rotary Club of Wexford

The two clubs pedalled together for Prostate Cancer 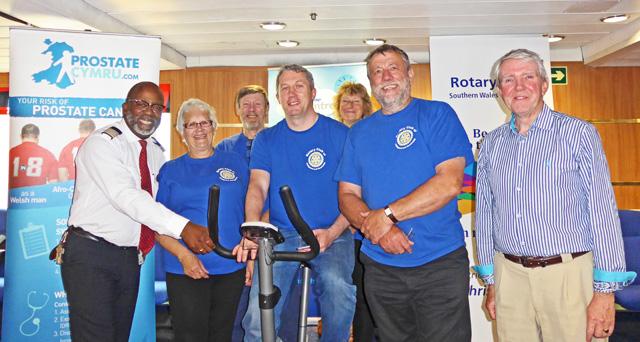 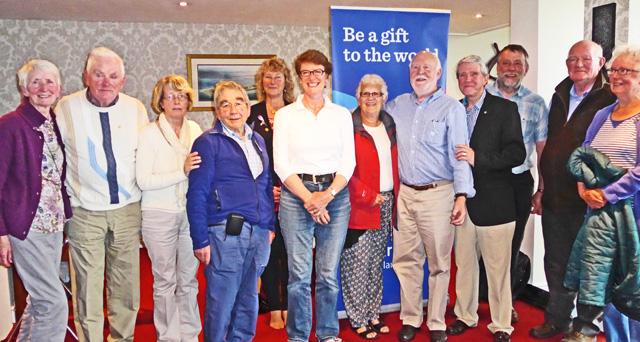 The Rotary Club held a special weekend of celebration to mark the twinning with Wexford R.C. On Saturday afternoon, our visitors from Wexford sampled the Last Invasion Tapestry, some retail therapy and walking a section of the coast path. In the evening, a convivial dinner at the Bay Hotel concluded with exchange of club bannerettes between President Maggie Stringer and President Eddie Breen from Wexford  and a traditional game of skittles using the club's pop-up bowling alley. On Sunday, a team of Rotarians from both clubs boarded the afternoon boat to Ireland aiming to outpace the ferry to Rosslare on an exercise bike. As last year, this charity event on Father's Day was in aid of Prostate Cancer Research. . President Maggie Stringer, President Elect Vanessa Walker, District Governor Chris Williams and Rotarians David Annis and Myles Huthwaite from the Fishguard and Goodwick club were joined by President Eddie and Pauline Breen, President Elect Niall Reck and Rotarian Helen Doyle from the Wexford Club. The aim was to raise awareness of, and raise funds for, Prostate Cancer and the money raised was split between Prostate Cymru and the Irish Cancer Society. As we entered Rosslare Harbour, the milometer indicated that we had covered the full distance between the two ports.  The party was met by members of the Wexford Club who took them for a meal before the Fishguard contingent boarded the ferry for the return journey. The two clubs plan to strengthen their ties in the next Rotary year. The Club are most grateful to the help and support from the staff of Stena Line.