I started my year emphasising fun and fellowship in our club and I do hope all our members experienced this during the year.
There have been many highlights during the last Rotary year. We have had many excellent speakers, thanks to our speaker finder.We have also raised our profile in Stapleford and Sandiacre by agreeing to back the S&S Carnival on 3rd September 2016.  I do hope this carnival along with the Beeston Carnival in July become regular features of our community service activities.  They will provide ideal opportunities for us to publicise what we do directly to the local community and, through this, hopefully attract new members.
In total by the end of June 2016 we donated £6155  to charities and helped the Women’s Refuge in Beeston by providing coffee tables and chairs and essential household items for their service users. We have also personally donated about £1000 towards the Rotary End Polio project to eradicate polio around the world – something which could be achieved within the next 18 months after over 35 years of sustained effort. Club Council will discuss the allocation of further Trust funds at their July meeting and present this to the club for approval. We also received a generous donation from one of our members which has now been allocated to Stroke Awareness and Macmillan Cancer Support.
During the year several members have done a great job in ensuring we feature regularly in several local newspapers and we have a Facebook page available to us for keeping interested individuals informed about our work.
Our annual charity golf day raised over £4000 and Barclays Bank added another £1000.
The District 1220 Business Partnership Initiative has been instrumental in identifying Trent Vale School in Beeston Rylands for receiving funding for an Eco Greenhouse.  It is hoped that further links with local schools can be made in the coming year.
In January I was fairly confident that we would be able to support the setting up of a ‘satellite’ club.  Unfortunately this didn’t progress but the potential to do so still exists. Several members have attended the White Hills Park Schools Federation ‘Breakfast Meeting’ where useful contacts are being fostered.
Finally I ended the year on a high.  For my President’s Night on 27 June, we enjoyed a very successful concert at Beeston Methodist Church with musical entertainment by the Long Eaton Silver Prize Band. The evening  helped raise £410 for Forces in the Community and Beeston and District Community First Responders, and we also presented a cheque for £1500 to Broxtowe Women’s Project.
I would like to take this opportunity to thank all the members of the club for ensuring I had a successful year.  Particular thanks go to members of Club Council and Committee Chairs.  On your behalf I would like to thank Steve Diacon who took on the mantle of Club Secretary at very short notice and has (tried!) to keep me focussed during our regular meetings.
Finally I would like to offer my support and best wishes to President Susan for 2016/17.  I know everyone will work hard to ensure you have a great year Susan. 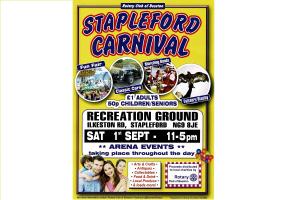 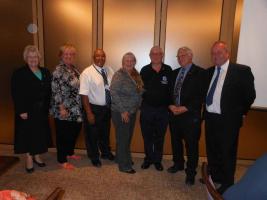 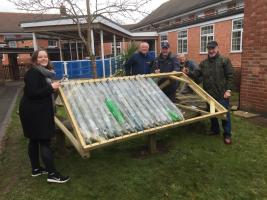 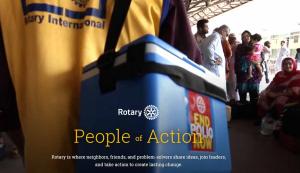 Rotary is built on fellowship; serving our community and the wider world 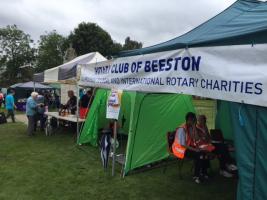 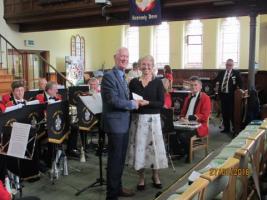 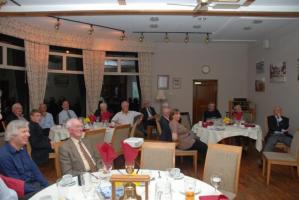 Summary of recent presentations given at club meetings 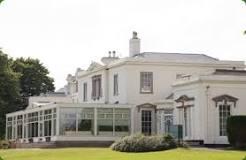 Due to the current Covid-19 restrictions we have cancelled our 24th annual charity golf day, which was due to be held on Wednesday, May 13th, 2020 at Beeston Fields Golf Club. 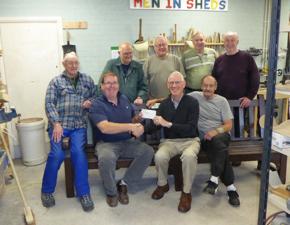 After 60 years service the Rotary bench at Beeston church was in need of some restoration; the Age UK Men In Sheds team made a great job of refurbishing the bench in return for a donation.