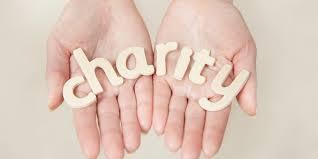 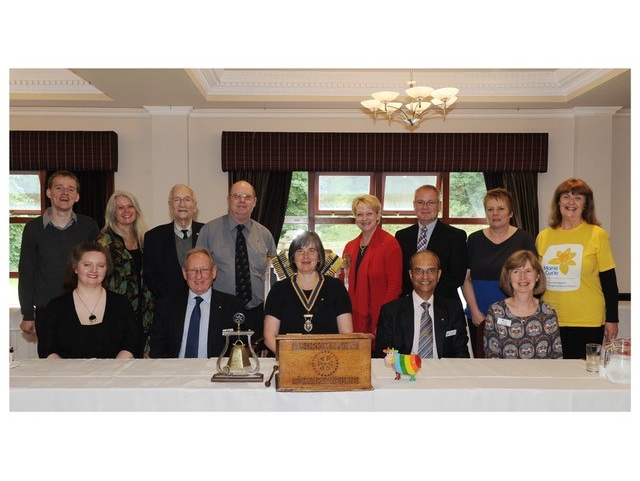 President Dallas with the recipients 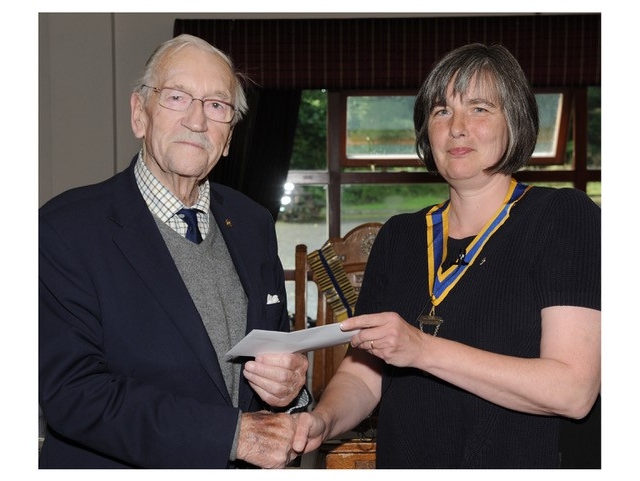 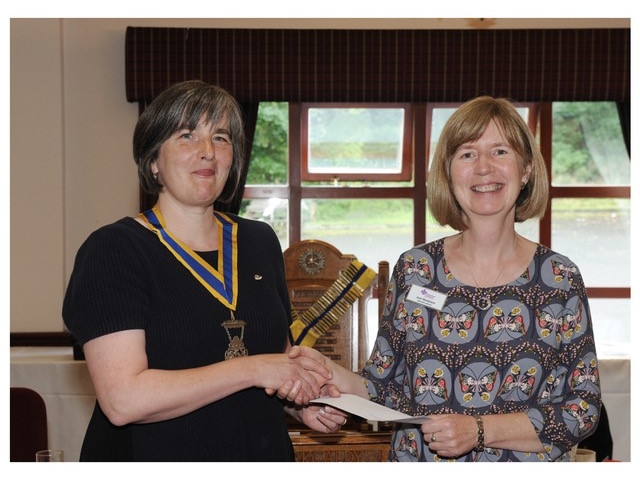 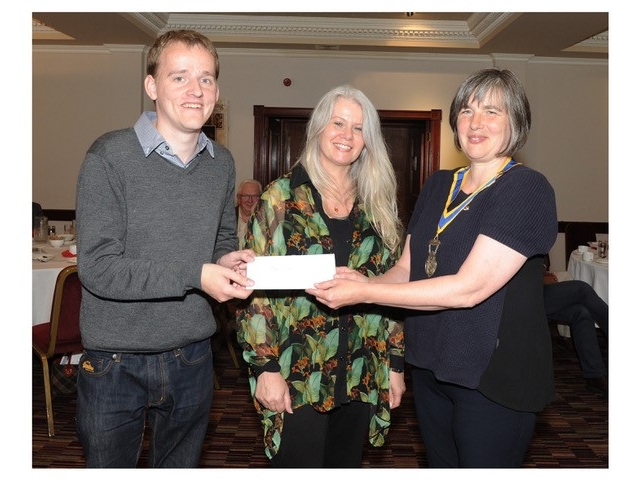 Debbie Daly and Michael accept on behalf of Equal Voice The weekly meeting of the Rotary Club of Kirkcaldy was held at the Dean Park Hotel on Tuesday 1st August, with this week being the Charity Day meeting. There were 34 in attendance, this included 7 guests and two visiting Rotarians from South Africa.

President Dallas relayed the sad news regarding the passing of PP Bob Buchan. The funeral will be held on Thursday 10th August at 2:15.

PP Ann Mitchel mentioned how successful the recent youth exchange had been with Kirkcaldy hosting 12 youth from all over Europe. In particular Ann thanked PP Iain Gow for his efforts in organising and hosting the event and PP Brian Munro who arranged a bus to Edinburgh castle and free admittance for all 27 participants.

Lindsay Stewart was selling Jam and Jelly produce harvested from Laws Close with the proceeds going back to support Laws Close. Lindsay also had the Rotary branded wear should anyone want to place an order.

Secretaries announcements included a warning of the recent e mail scam sent to Rotarian addresses and also details on the District Conference.

As it was Charity Day there was no designated speaker, instead the Club invited representatives from some of the beneficiary charities who were presented with their donation cheques and offered the opportunity to say a few words.

PP Ken Kelly accepted a cheque on behalf of age concern elaborating on how important it was for the elderly to have somewhere they could pop in for a chat and that with senior citizen’s lifespans lengthening it was so important to keep them active and not leave them in isolation. Age concern holds meetings at the Salvation Army premises every Thursday between 10am and 12pm where everyone gets the opportunity to socialise over some home baking. Age Concern also delivers parcels at Christmas and to many of the recipients being remembered and offered a gift is a gift in itself.

Jane Maskelyne accepted the cheque on behalf of Alzheimer Scotland and commented that the donation was greatly appreciated and that ‘we should watch this space’ as they have something coming soon.

Deaf Action was represented by Jennifer Hunt who announced that they will shortly be opening a shop on the High Street, this will provide a valuable revenue stream as well as operating as a learning hub. Jennifer elaborated on how their workshops and awareness sessions are helping get people back on their feet and into employment.

Equal Voice offers advocacy assistance to vulnerable and disabled adults who need support speaking up for themselves, Debbie Daly introduced the program and was followed up by Michael one of the charities recipients who gave a glowing testimonial of the charity.

Fife Young Carers was represented by Susan Deswarter who opened with the staggering statistic that 1 in 10 children in Fife is a young career, either for their parents or siblings. The charity provides support groups as well as sending the carers for respite themselves. A highlight last year was an invitation to the Queens Garden party which was attended by 7 young carers.

Yvonne Whitehall attended on behalf of Marie Curie and was pleased to state that today was the 3rd anniversary of Marie Curie being in Kirkcaldy. She emphasised how Marie Curie is not just associated with cancer, they work with all terminally ill patients, and how in Fife alone there are 2850 patients a year requiring palliative care. It costs £20 an hour to provide a nurse so the charity was most grateful for the donation from the Rotary Club.

Tom Phillips from the Kirkcaldy YMCA expanded on the work of the YMCA informing us of the different sectors of the community they help, it is not just the youth as commonly perceived. They do however have a successful youth program and last year had 14,000 attendants at workshops for youngsters. The charity benefits from Government grants but still needs to raise in the region of £150,000 a year so once again they were most grateful to the Rotary Club for the donation.

President Dallas closed the meeting mentioning that it should be us thanking the charities for the wonderful and diverse work they do in the community and how please the Club was to be able to support them all.