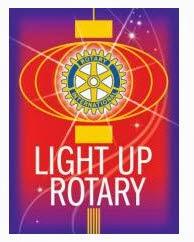 26 years after first having been Club President, Ken Winslow took up the office once again.

In November the Club visited the new NSPCC centre in Swindon and members were very impressed with the facility and happy to agree that a large portion of funds raised during the year should go to this charity.  Three events, a Night at the Dogs at Blunsdon Abbey Stadium, the Swimathon and the Golf Day, were held specifically for them.  Caroline Morgan, an NSPCC fund-raising officer, was on hand throughout the year to assist with the promotion and organisation of these events.  In all £8,000 was presented to the NSPCC.

Other fund-raising events were Cycling in the Highworth Co-op, the annual Quiz in conjunction with the Inner Wheel Club, a Pegasus Brass concert in Highworth Parish Church, a stall at the Highworth May Day Market with a collection for Rotary’s Nepal Earthquake Appeal.  One member in particular, Terry Williams, was responsible for raising £1,000 by growing and selling his Christmas Trees in December, his daffodils in the Spring and organising the Club’s stall at a plant sale in Highworth Market Place.  In all £15,400 was raised during the year.

Social events included seeing “Calamity Jane” with Jodie Prenger at the Watermill Theatre, a Christmas Party at Wrag Barn, Fireside Suppers and a weekend in Torquay which included a visit to Agatha Christie’s home on the banks of the River Dart.  In the Rotary Sports Competitions the Club reached the semi-finals of the Skittles and the second round of the Quiz.  Two teams were entered in the Golf competition and one was still in the running when the competition carried over into the next Rotary year.

Some remarkable and interesting speakers at our meetings during the year included one from Canine Partners, a Forensic Archaeologist, Karen Edwards whose daughter’s remains were found when a man in custody for murder confessed to her murder too, Peter Wells the District End Polio Now Officer, Jacqui Smith, Head Teacher of Uplands School, and Dr Mike Pringle a local author and historian.

The annual Young Musicians’ Competition attracted the biggest number of entrants to date and more than ever provided a highly entertaining evening of music and song.  A candidate for the Rotary Youth Leadership Awards (RYLA) was selected and the necessary fee paid to send him to RYLA in the Forest of Dean in July.   As well as supporting the NSPCC, donations went to 17 other charities including ATE Ghana, Shelterbox, End Polio Now, Action for Children, and Uplands Educational Trust.  A total of £18,200 was distributed.