Andrew Brogan who is the owner and creator of Henstead Exotic Garden, gave a presentation about his garden. 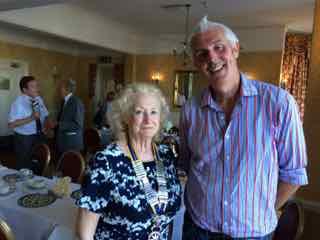 Our speaker on Tuesday, 30th August, 2016, was Andrew Brogan who is the owner and creator of Henstead  Exotic Garden, sometimes known as “Suffolk’s Secret Jungle.  The garden is a two acre fully landscaped exotic garden which Andrew created twelve years ago from an abandoned nettle strewn site backing onto ancient woodland and uses dramatic architectural plants and inspiration from travels to the Far East and Tunisia.   The Garden, which nestles between Southwold  and Beccles  just a mile from the A12, contains 100 plus large palms, bananas, 200 plus bamboos (up to 30 feet tall) a Tropical  Summer House and a Thai style Pavilion with a twenty foot wooden walkway.    Andrew met Alan Titchmarsh who subsequently featured the garden on BBC Gardeners World.    It was also shown on the National Geographic TV Channel and received a Gold Award on Chanel Five’s Britain’s Best Garden.    It has also been featured in the Daily Telegraph, Homes an d Gardens, the Daily Mail, the Sun and the London Metro.   The Garden contains a Lord of the Rings style composting toilet with stained glass windows, a rustic outdoor café, secret hidden paths and is well worth a visit.  It opens every Wednesday from May to October.    Andrew was thanked for his very interesting presentation by Rtn. Henry Dent.