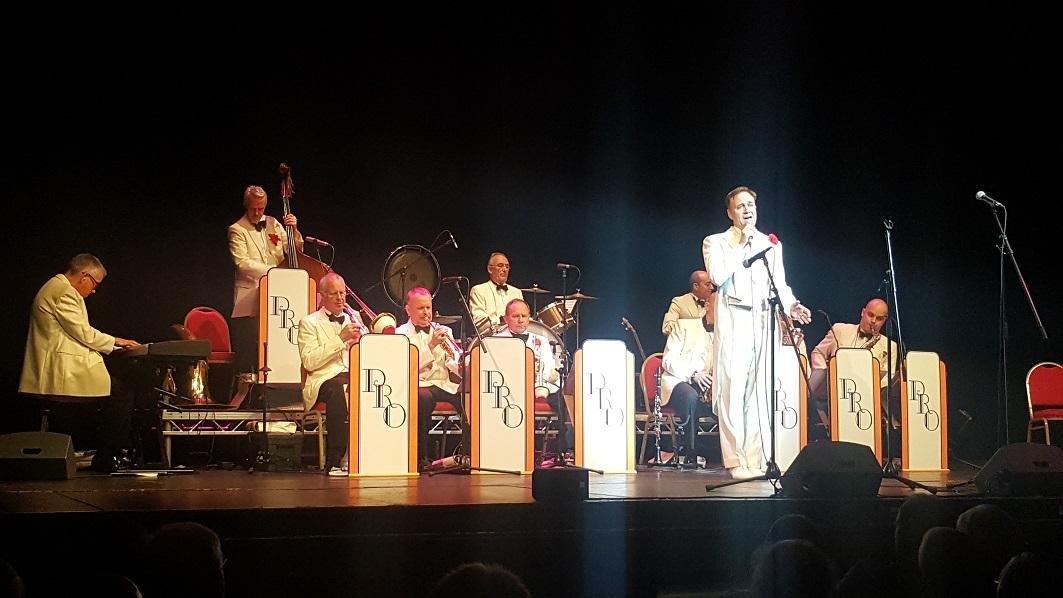 In the true swing genre, the orchestra quickly had feet tapping and heads nodding. Opening with the rousing Bugle Call Rag and moving on to other favourites such as Puttin on the Ritz, Top Hat White Tie and Tails. The ten strong orchestra and vocalist filled the auditorium with the syncopated beats and toe tapping melodies from the golden age of swing. A strong rhythm section, double base and drum provided the perfect anchor for the soaring trumpets, saxophone, trombone and clarinets complimented with the honey smooth easy melodic tones of Duncan Galloway. The vocal trio of Duncan Galloway, Adrian Fry and Simon Townley’s performance of Zing Went the Stings of my Heart received a rapturous response. The first half closed with Egyptian Ella and Duncan Galloway and Simon Townley’s performance of the Egyptian sand dance, performed with immaculate comedic timing and showmanship.

The second half opened with more greats including High Society, Cheek to Cheek and As Time Goes by. A new song, My Canary has Circles under its eyes caused much amusement. Tom Spats Langham gave a mesmerising solo performance on the banjo of Pickings. His mastery of the banjo, speed and rendition received resounding applause. The art of syncopation was to the fore with Simon Townley on the piano with Our Love is here to stay. More solo performances came from Malcolm Baxter on trumpet with Stardust, the Pasadena Roof Orchestra jazz band ( washboard, banjo, saxophone, and soloist) with Dinah, and John Sutton on the drums with Tom Thumbs Drum. Throughout the performance the audience applauded, feet tapping and heads nodding. The performance ended after a standing ovation bringing a return to the stage with She’s a Latin from Manhatton and closed with their signature tune – Home in Pasadena.

The Pasadena Roof Orchestra turned professional in 1969. They have been touring and performing throughout the UK , Europe and America ever since. Their success is due to their musicianship and the quality of the music from the golden age of swing. Swing was the music that lifted people’s spirits during the great depression and certainly on Friday night the audience was lifted by the swing feel good factor. After the performance Duncan Galloway signed copies of their new CD – Live from London, while receiving much praise from the departing audience.

This Orchestra is definitely not on the way down. Lets hope that we are treated to a return performance in Weymouth soon.