Over 700 boxes were handed over to the Honeypot Charity. The bench from 'The Man on the Moon' featured on the Burley School picture. 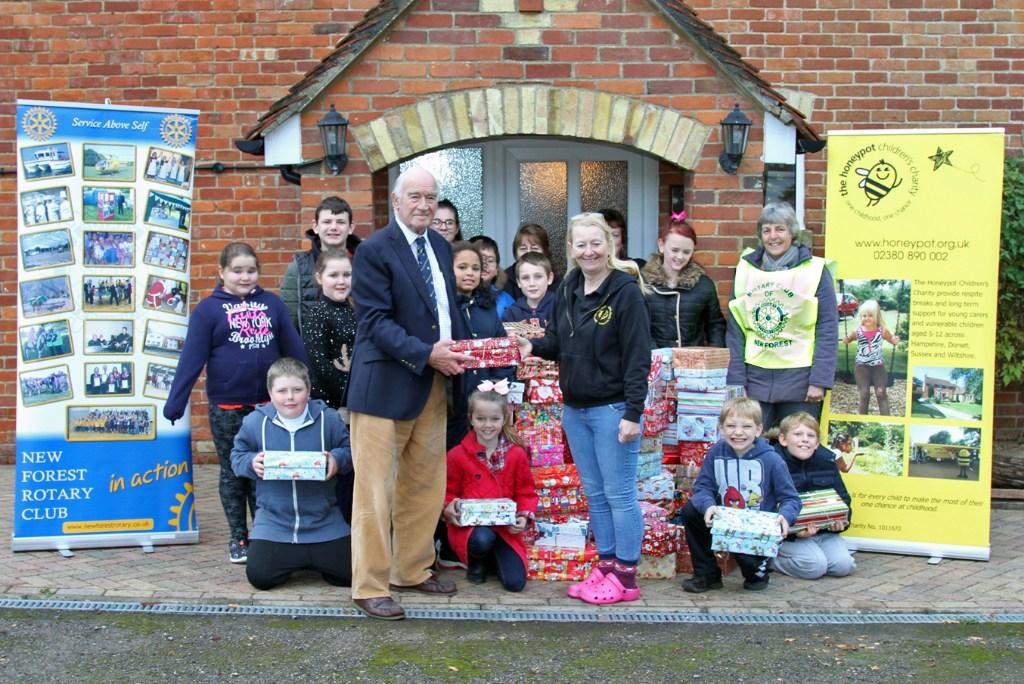 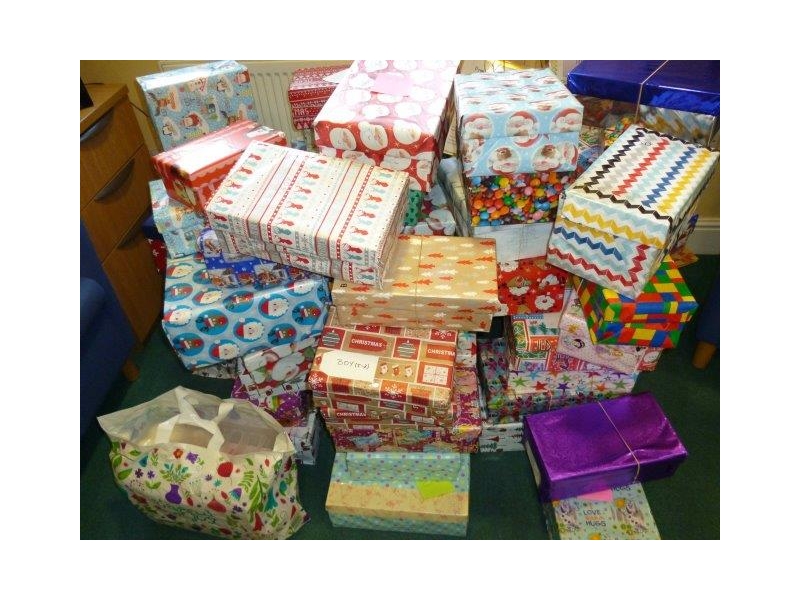 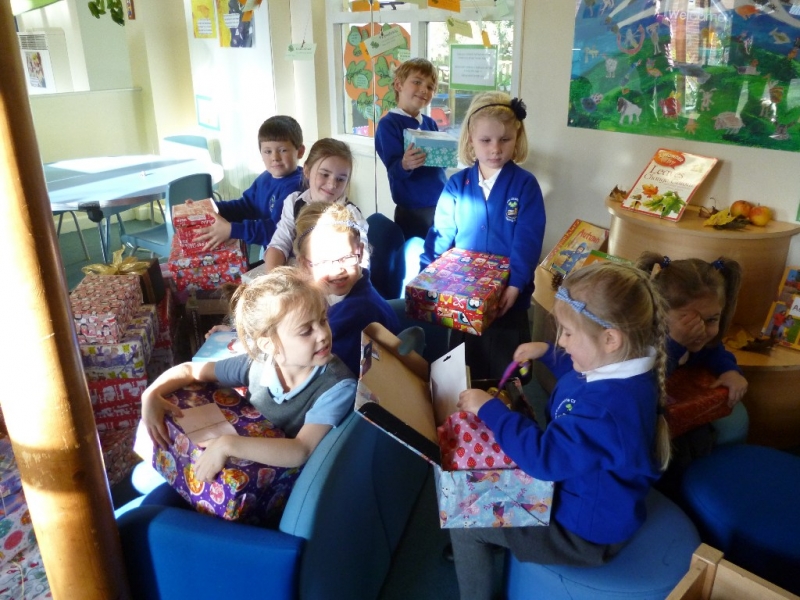 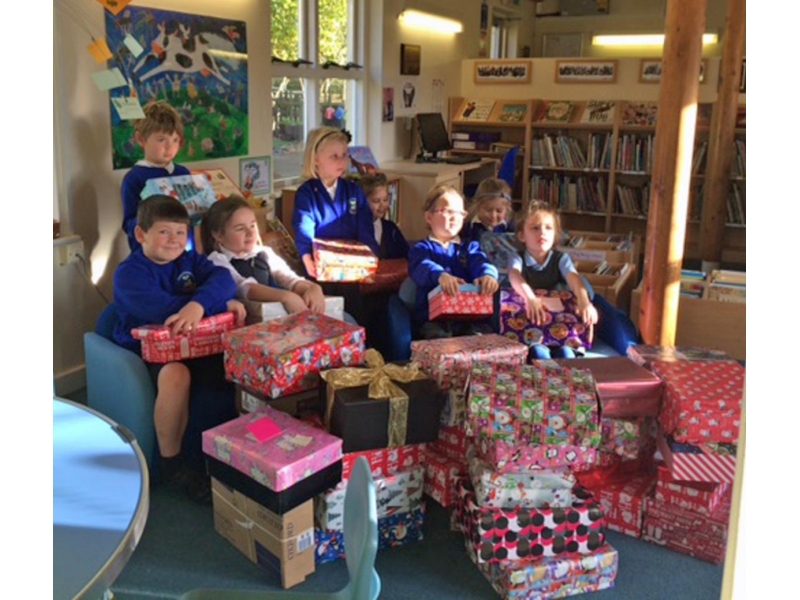 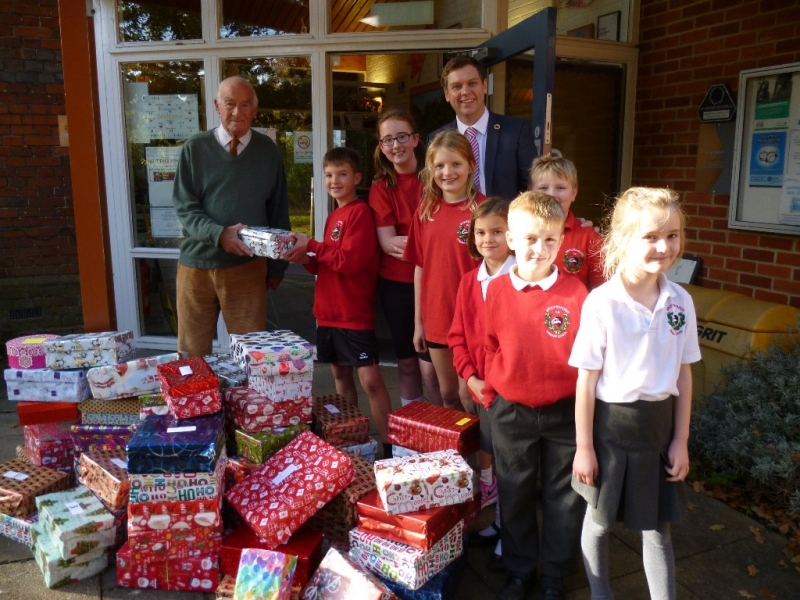 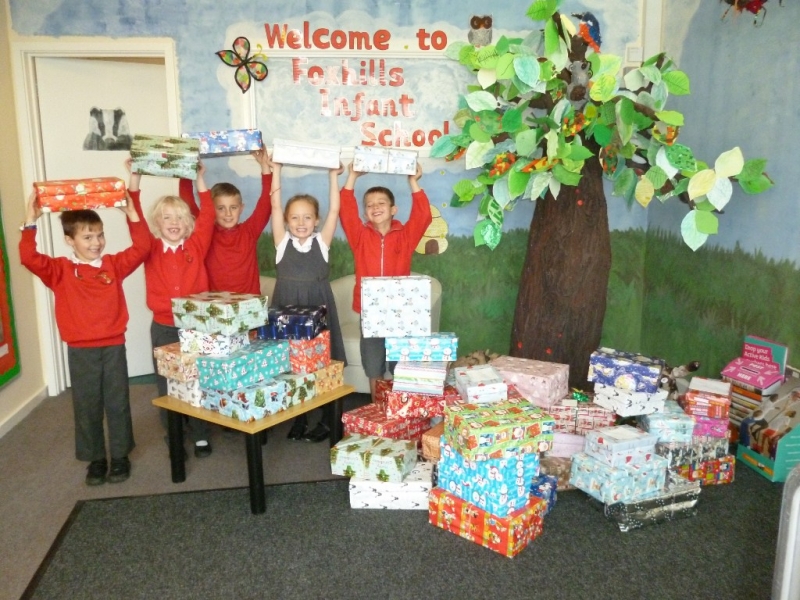 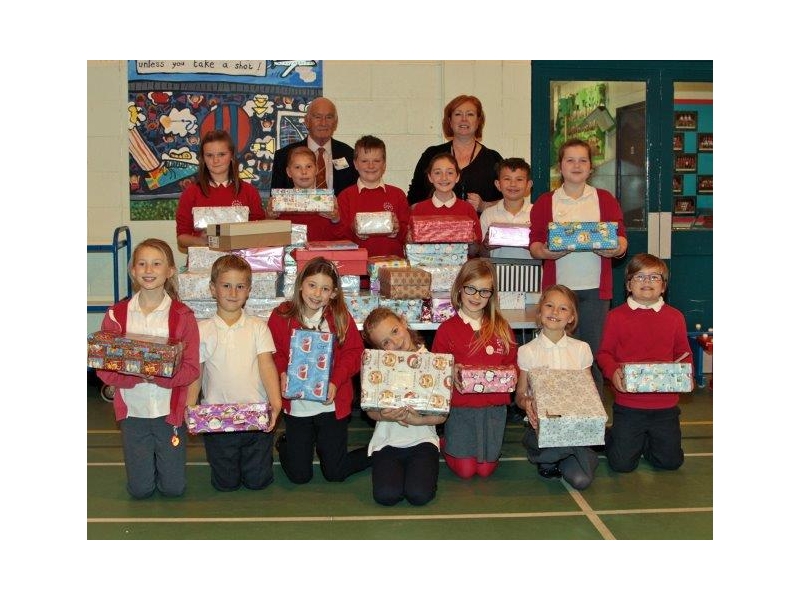 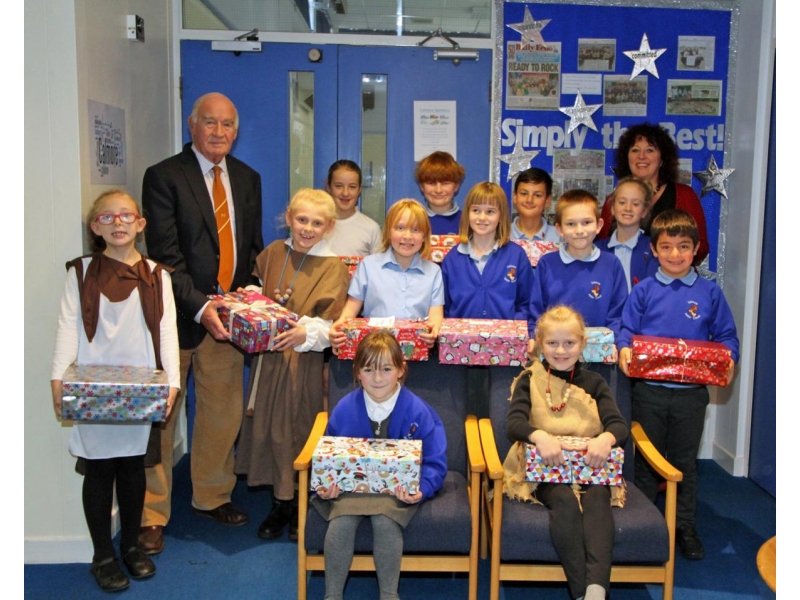 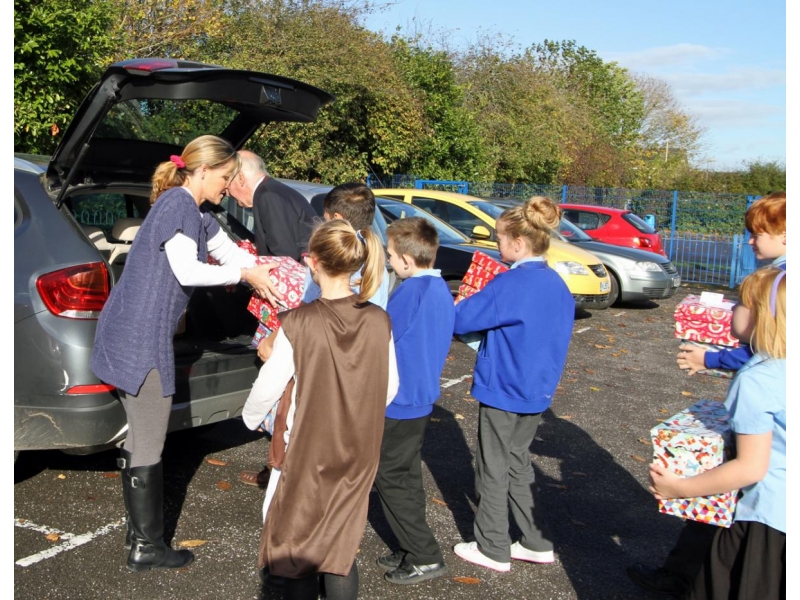 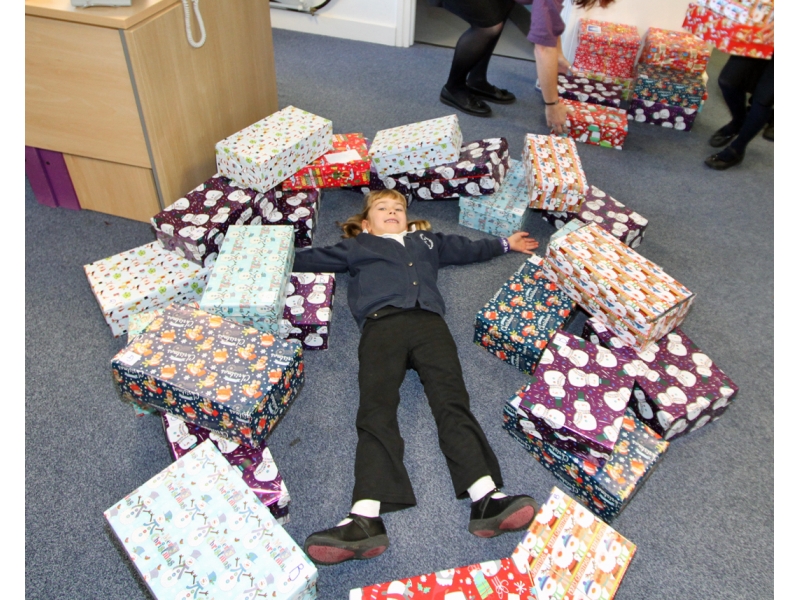 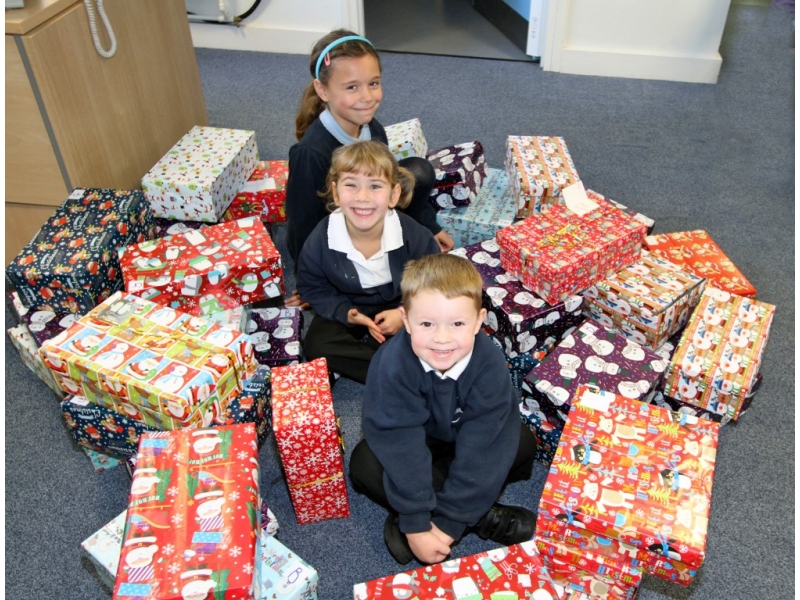 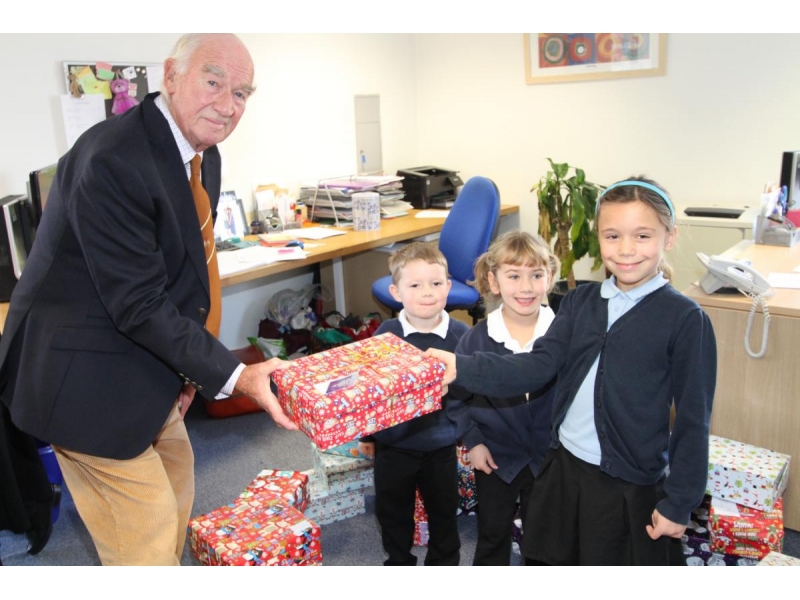 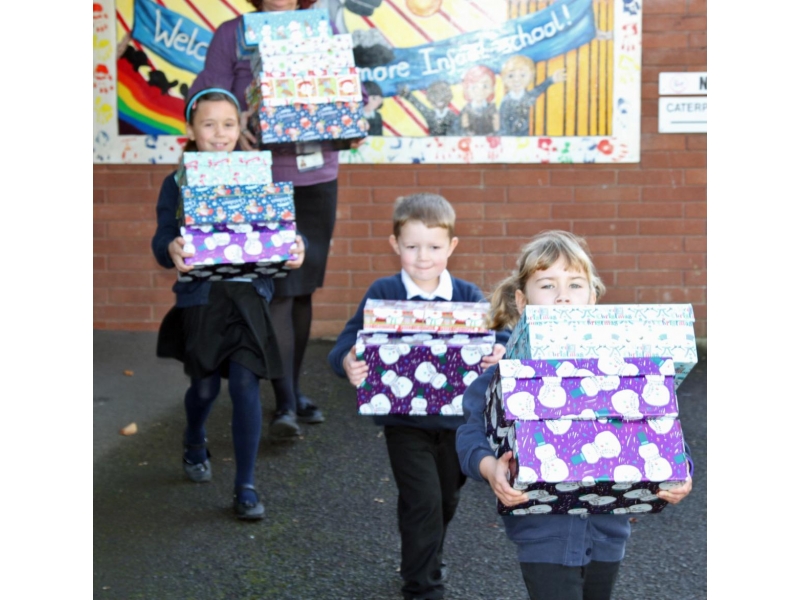 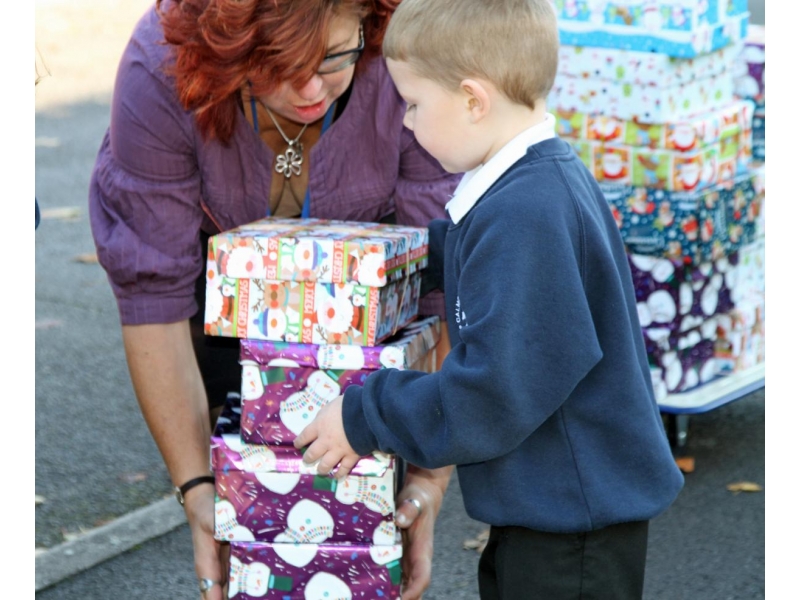 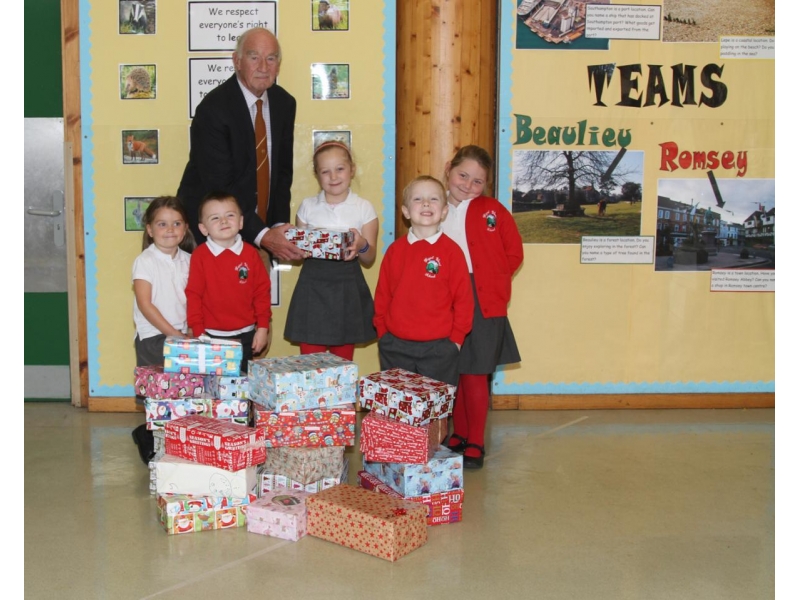 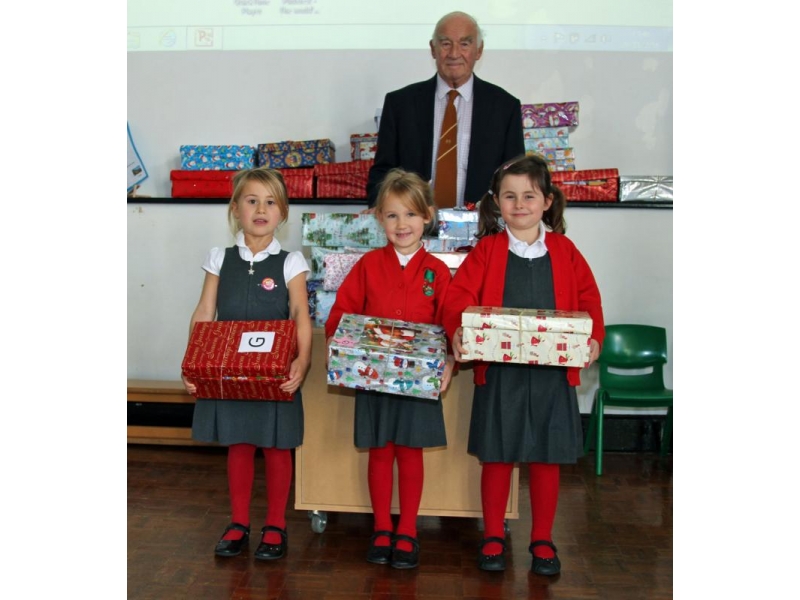 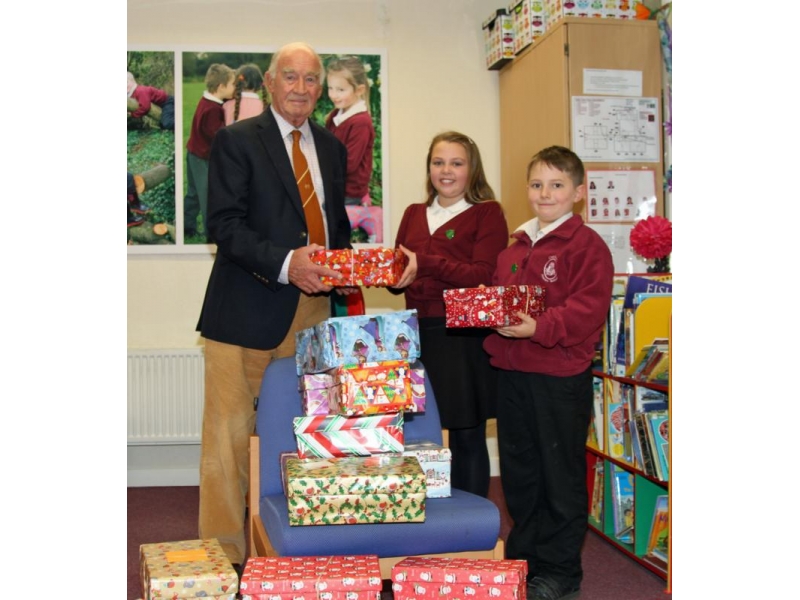 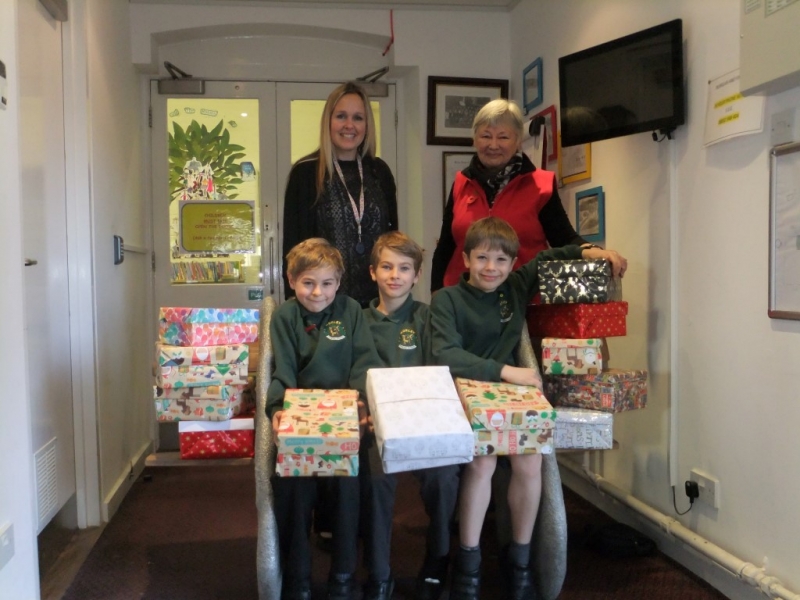 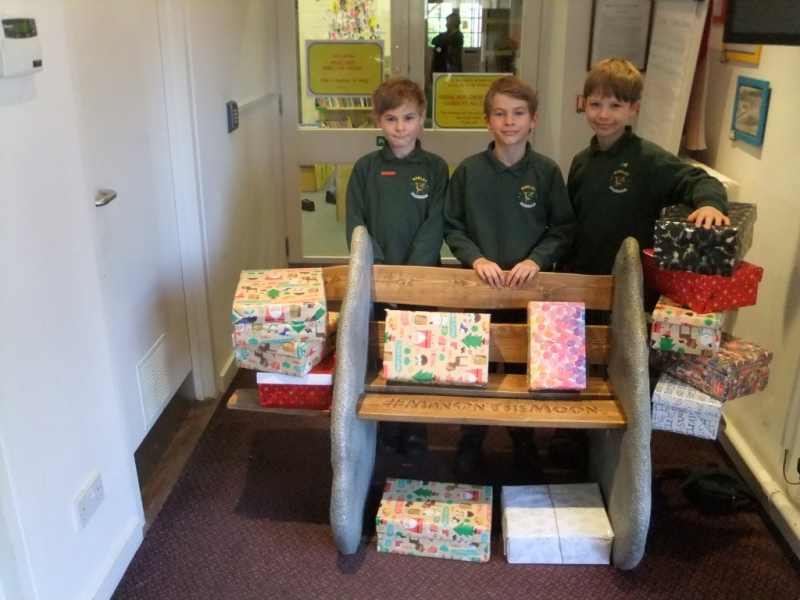 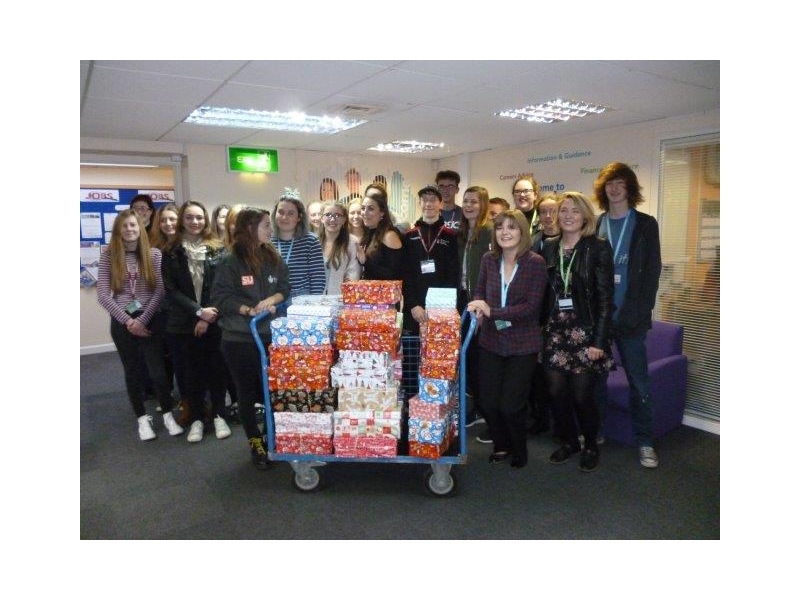 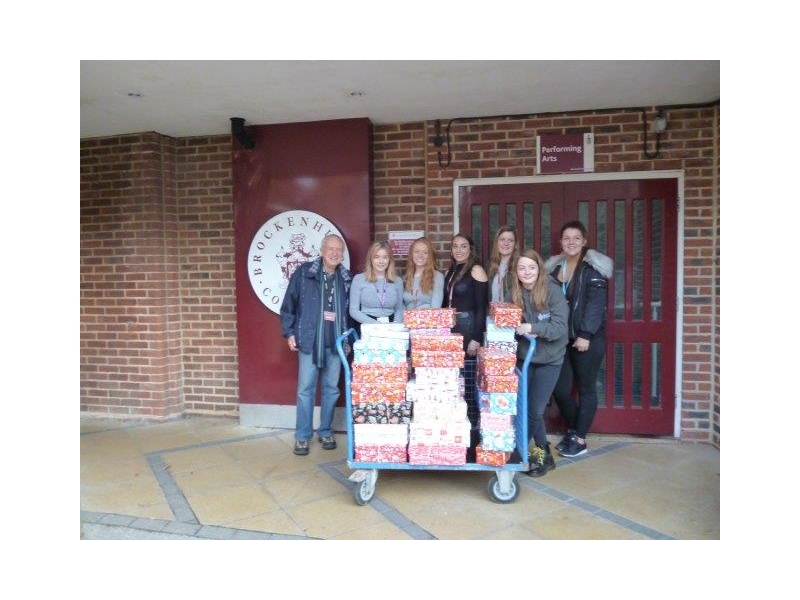 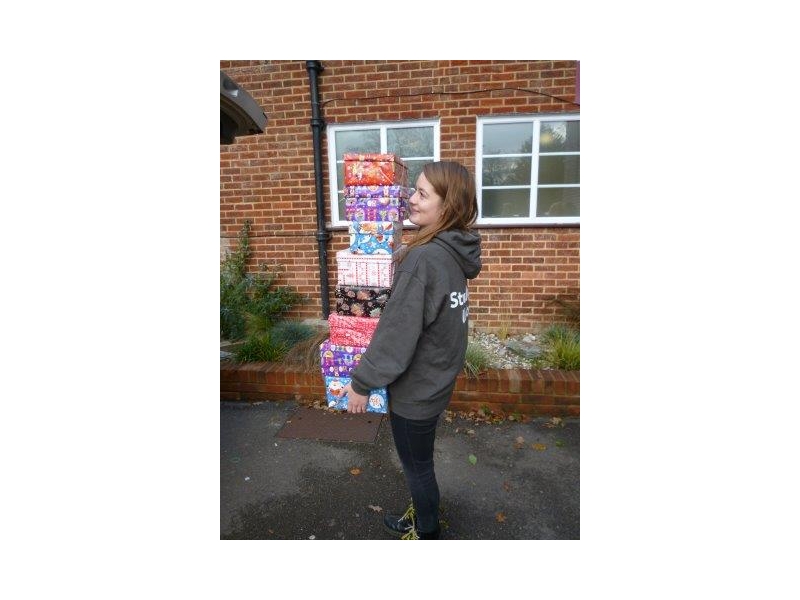 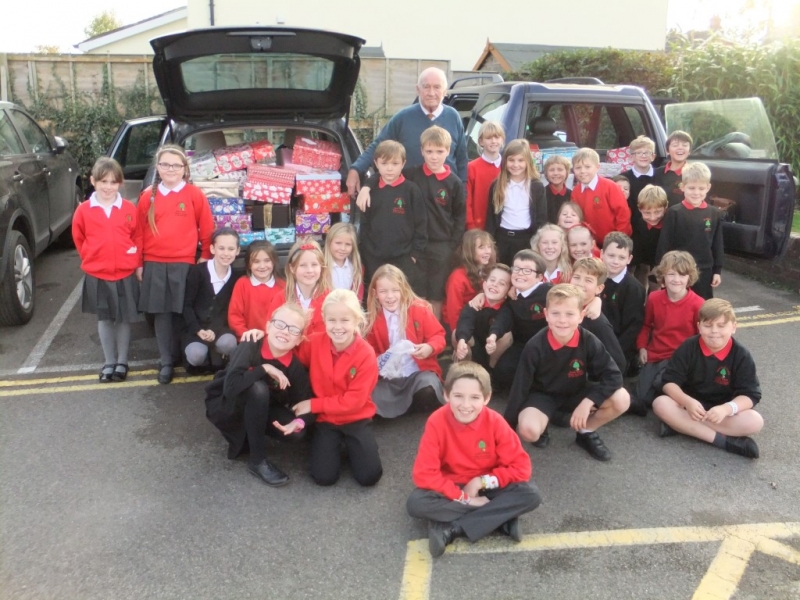 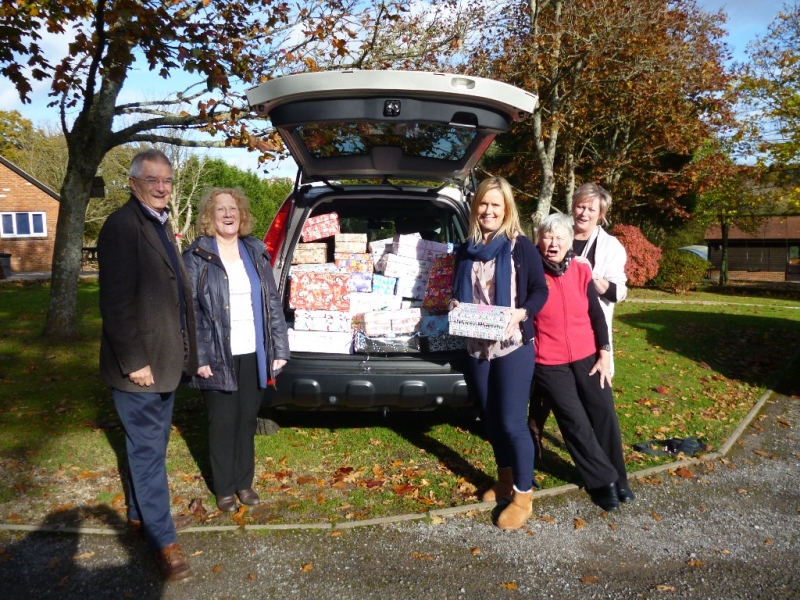 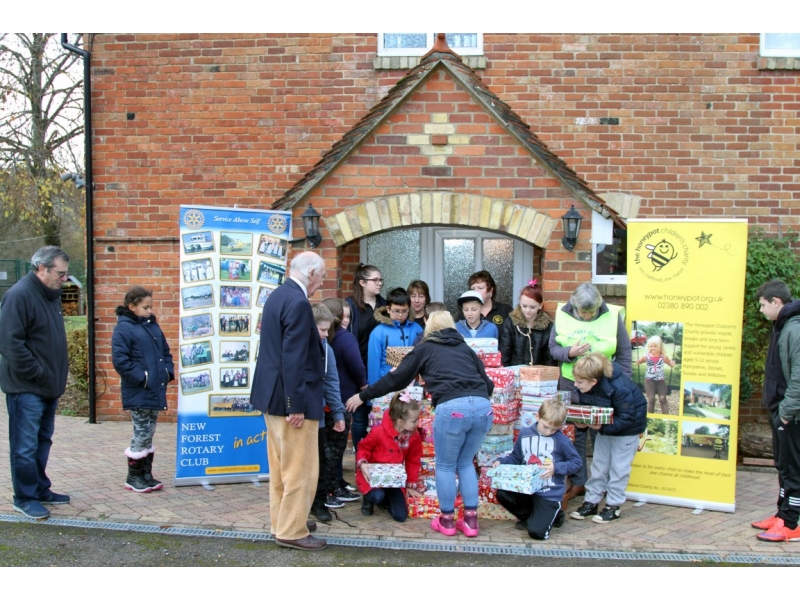 ANOTHER 700 SHOEBOXES TO HONEYPOT CHILDRENS CHARITY

"For the fourth year running the New Forest Rotary Club of Lyndhurst has organised Christmas-filled shoeboxes for the Honeypot Childrens Charity, primarily from fifteen schools around the New Forest and Totton.   This year over 700 shoeboxes have again been amassed making a grand total of some 2,600 over the four years which represents, as estimated by the Rotary Club, a massive accumulative donation of almost £25,000 by very generous New Forest and Totton people.

The Honeypot Childrens Charity provides ongoing support to vulnerable children and young carers aged 5-12 years, most of whom have a seriously ill or disabled parent to look after.   The picture shows a small part of this year's collection being presented by the Rotary Club, represented by David Matcham, to children and staff from Honeypot, represented by Clare Holloway, at  the latter's New Forest establishment.

Philip Dinn, President of the Rotary Club, said “The efforts and generosity of the many participating schools, children and parents, and other supporters, has again been truly amazing.   The kindness with which everyone has filled and donated a Christmas-wrapped box is a magnificent gesture towards many disadvantaged children throughout the UK and here in the New Forest.   The New Forest Rotary Club and Honeypot extend their grateful thanks to all concerned”.

Information on the Honeypot Childrens Charity can be found at www.honeypot.org.uk and on the New Forest Rotary Club at www.newforestrotary.co.uk."

THE BENCH AT BURLEY SCHOOL FROM 'THE MAN ON THE MOON'.

Related by Rotarian Sue Gully, "On the morning of 10 November our President Philip Dinnn and myself went to Burley School to collect the shoeboxes for the Honeypot Appeal. Three boys, Jack Webb, Jamie Speirs and  Stanley Arnold  welcomed us and posed for the handover of the boxes.

The school Secretary told us that the bench they were on had been given to the school by the John Lewis Store in Oxford Street. It had been featured in the Christmas TV advert last year. A new member of the staff at the school had worked for the store for many years and had left to become a classroom assistant. She was so impressed with a reception class project about 'The Man on the Moon' that she sent the work to John Lewis and they had donated the bench to the school."

On 5 December the 'Community News', distributed by the students of Brockenhurst to the local community, had the following article on their contribution to our Shoe Box collection for Honeypot. President Philip was pleasesd to find a copy drop through his letterbox.

Students and staff at Brockenhurst College crammed 54 shoe boxes full of treats to bring Christmas cheer to young carers and vulnerable children in the UK.

The initiative was part of The Honeypot Christmas Shoebox Appeal and was undertaken at the College in partnership with Rotary Club of New Forest.

Early Years students and Student Union members were among the most active contributors who gave their time to make a difference this Christmas.

Student Union President Thea Joyce said: “Our members have been only too pleased to do something for these brave children at Christmas.

“The activity has created an enormous buzz in our SU office because we know we’re doing something really worthwhile.”

College Principal Di Roberts CBE said: “This kind of active involvement in helping others simply doesn’t happen without the collective will of our college community.

“That’s why I take my hat off to everyone involved and feel a real sense of pride that as a college we have made a difference,” she added.

Since 1996 The Honeypot Children’s Charity has worked to enhance the lives of young carers and vulnerable children by providing respite breaks and on-going outreach support.

Beneficiaries generally care for a chronically or terminally ill loved one, or have a parent with drug, alcohol or mental health issues.