HANDOVER EVENING AT THE CROWN

A SPECIAL AND ENJOYABLE EVENT 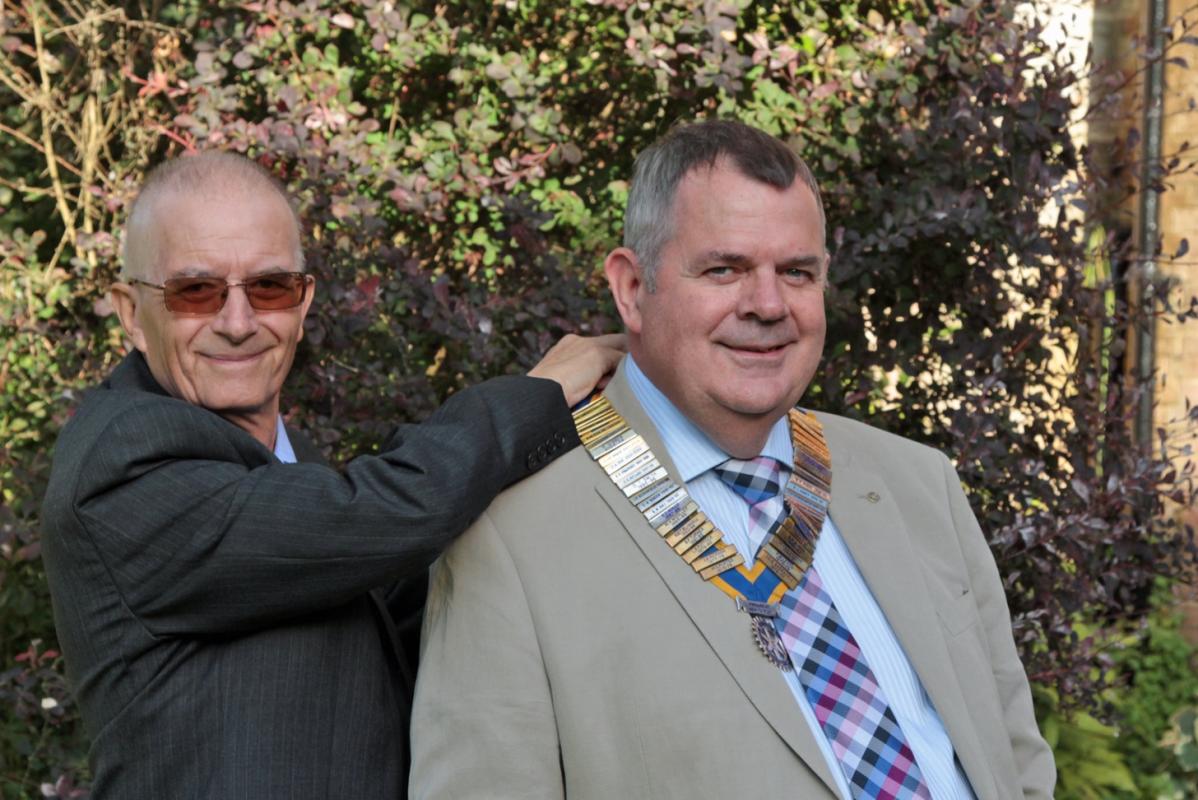 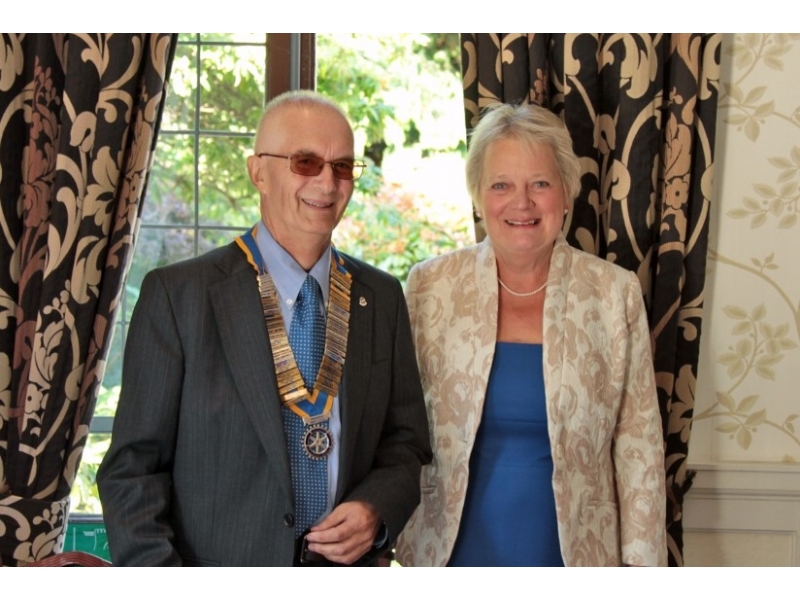 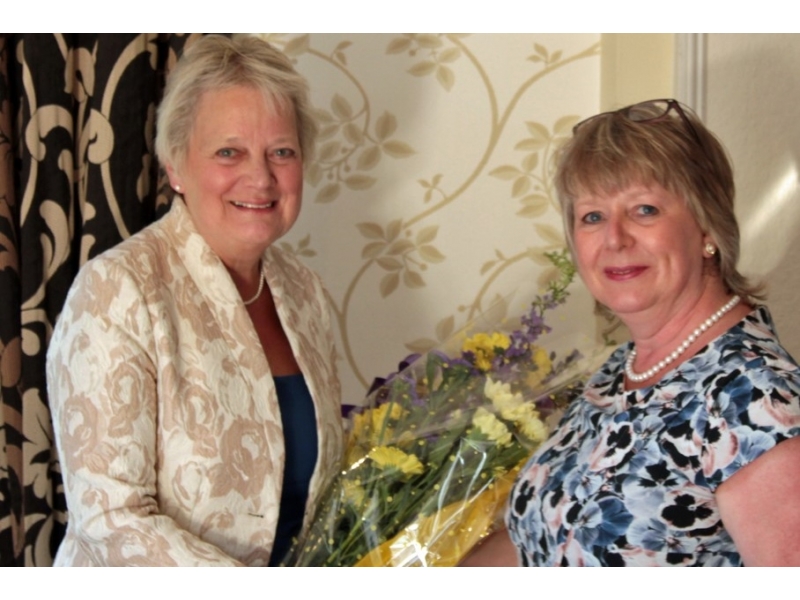 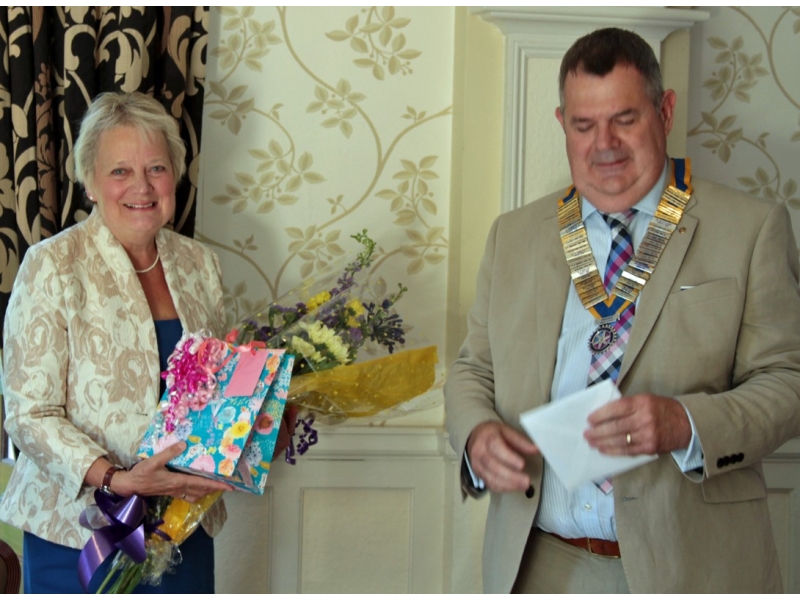 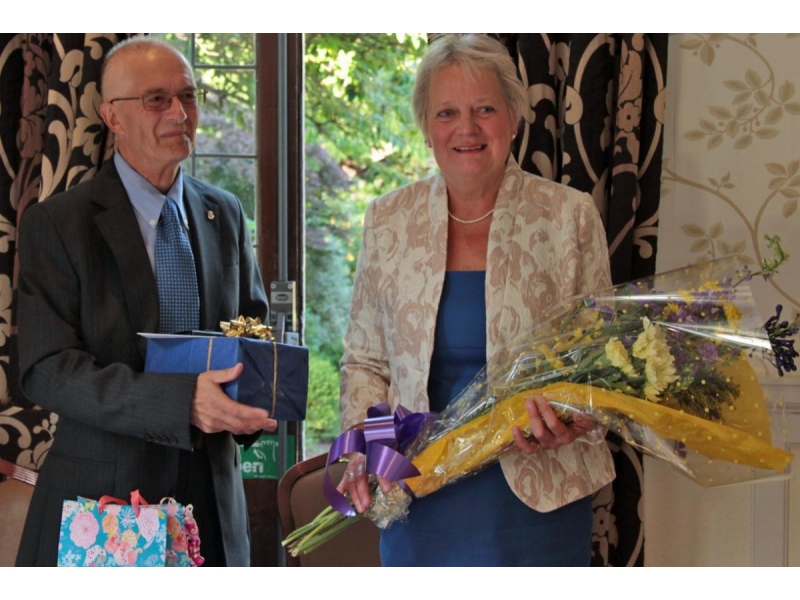 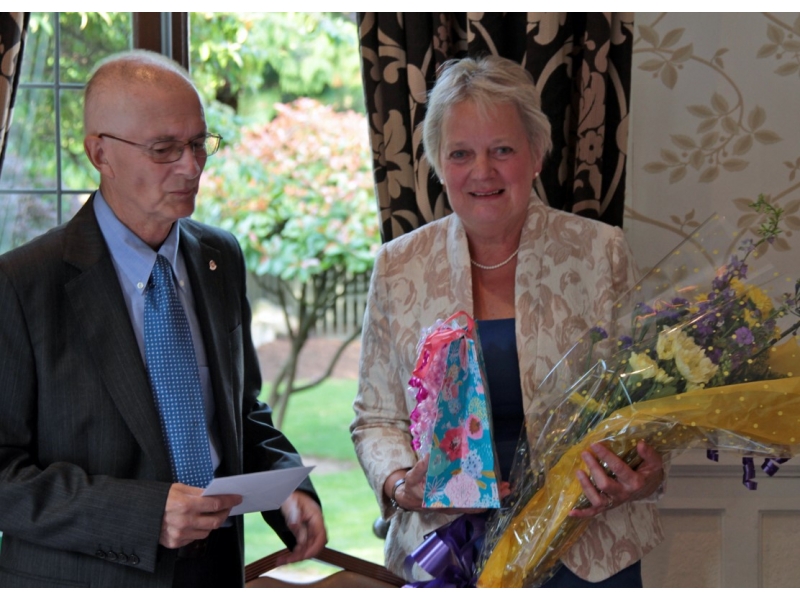 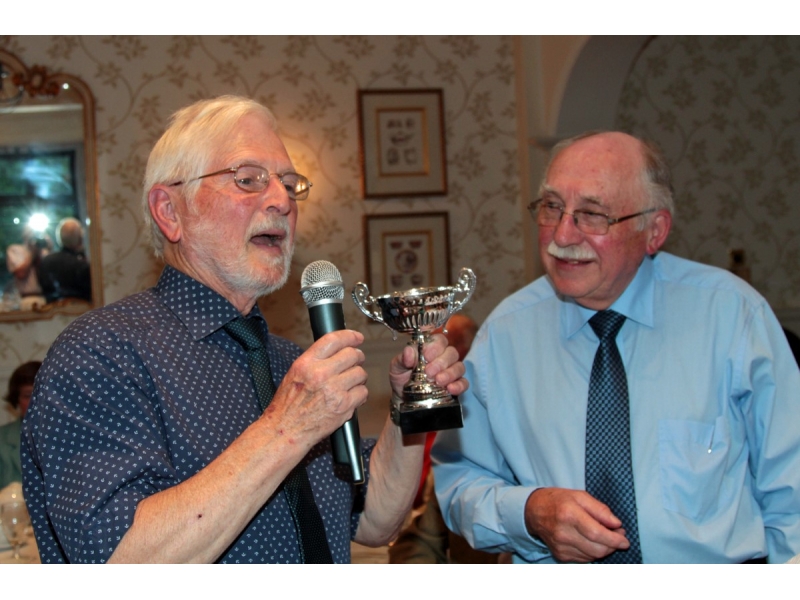 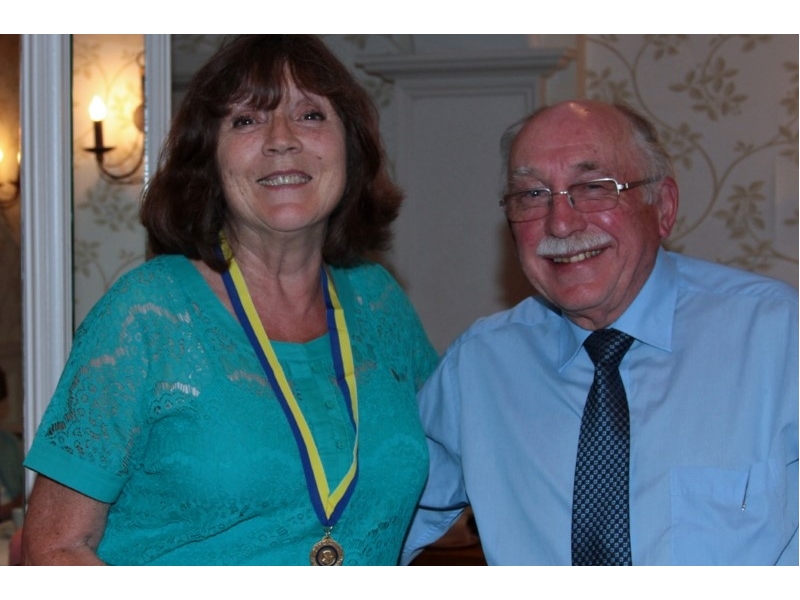 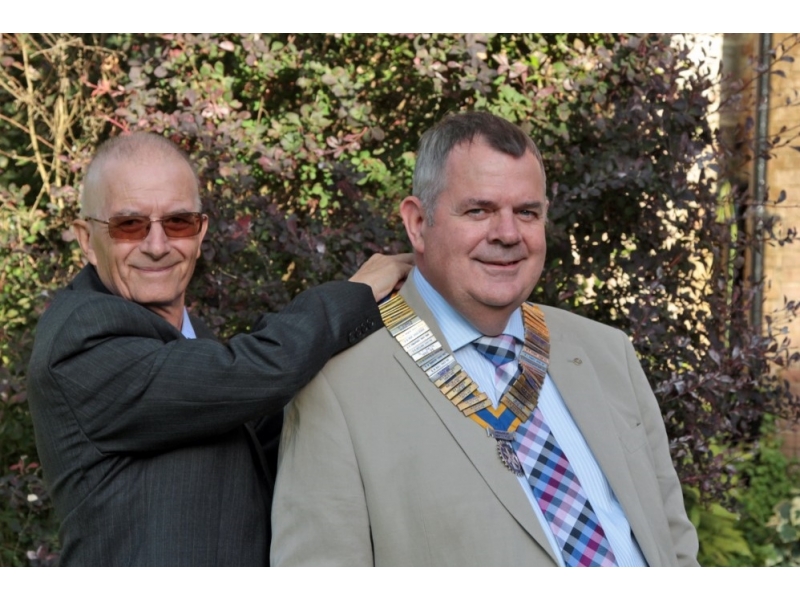 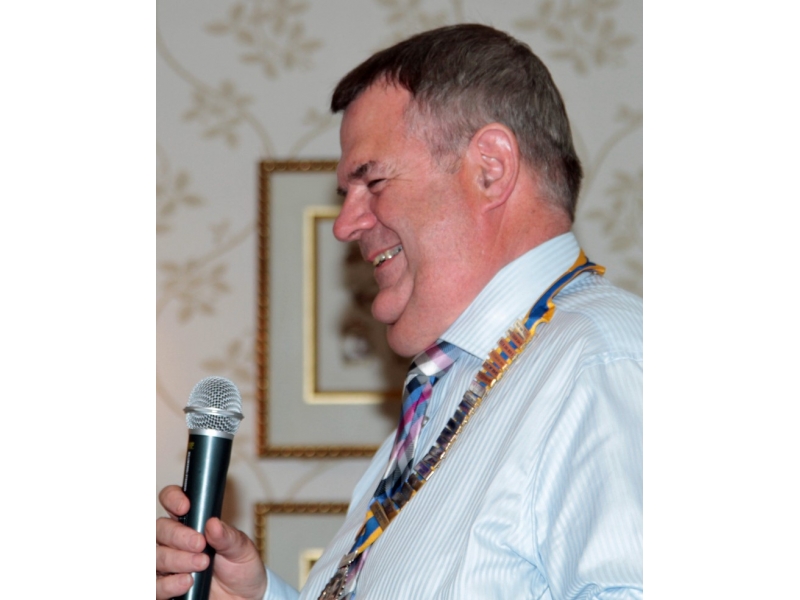 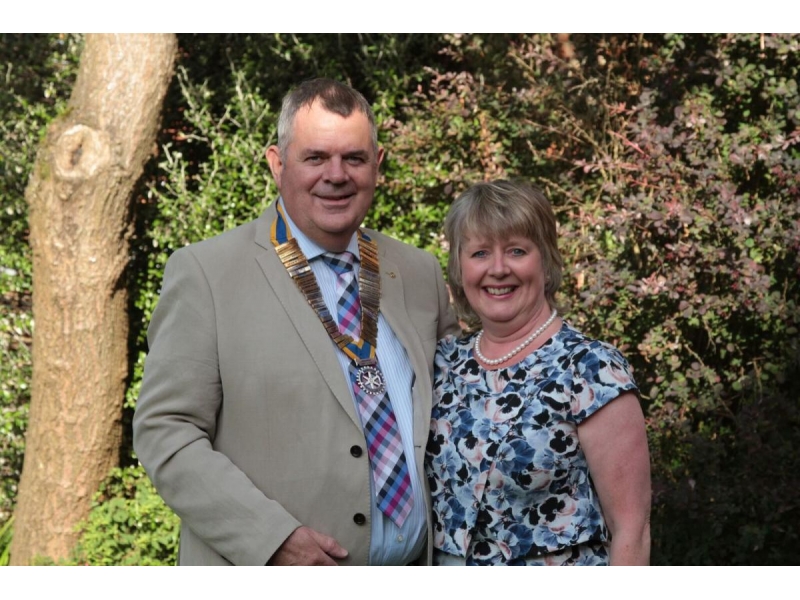 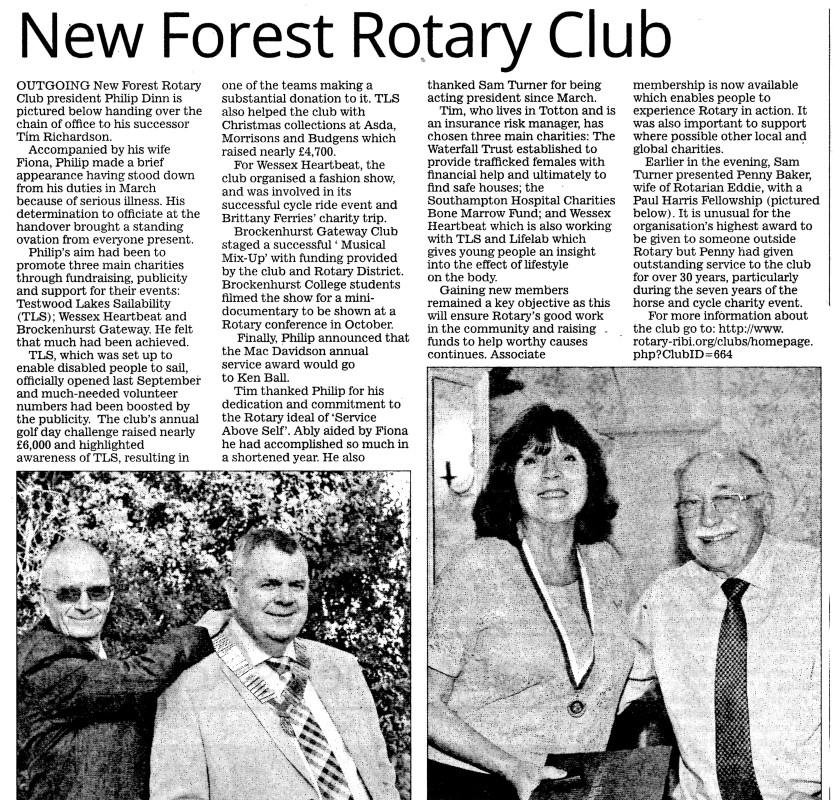 President Philip had been away from Rotary due to illness for some months and it seems that President's Handover would be a event missing one of the main characters. To our delight, and clearly to Philip's too, he was given permission by his medical team to attend but with as little physical contact as possible.

Philip and Fiona joined us for the begining of the evening to a standing ovation.He was able to give us a review of the major objectives and achievements of the year (see his presentation below) and after receiving gifts returned home.  It was wonderful to see him.

President Tim set out his proposed charites for the year and these will shown on the 'Charities' page shortly.

A special event was the presentation to Penny Baker of a Paul Harris Fellowship for her tremendous contribution to the club over the years. She was clearly very surprised and delighted. Ever Eddie did not know in advance..

The photos, by Ray Dawes, outline the evening.

Presidents Report. 2017  -   A personal point of view (given on the night). The year started with my stated intent -  to maintain active Rotary involvement with three charities. Each with their own needs –and the Lymington Times published the complete A4 flyer.

So did it succeed? The year started off well, with the first of the charity events on 1st Sept with the official opening of Testwood Lakes Sailability (TLS).  Our commitment to them was publicity, to help boost the volunteer base, and they certainly got that with Alan Blair providing the story line.

But before that it was the chance for TLS to use our 31st Annual Golf Challenge Day for further publicity.  During the course of the day it became apparent that many of the participants were aware of the work done by other Sailability projects and were very pleased to hear of the new local venture, including one particular emotional appeal for support.  Later in the year we were informed that one of the teams made a very substantial donation direct to TLS.

TLS were physically, and very visually, supportive during the Christmas collections at Morrisons and ASDA, and although I know from personal experience there was a lot of interest shown, it is very hard to demonstrate a direct effect.  The same applied to President’s night with a first class setting and a chance for other local clubs to come a listen to an excellent speaker, who gave his time free when he heard to was partly to publicise Sailability.  A chance for TLS to network with other groups but unfortunately there were few external guests so marketing potential was limited.  Given the sailing dimension I would have hoped to have seen more active support from the Rotary sailing fraternity and from the venue.

Meanwhile club members also supported Wessex Heartbeat on the Brittany Ferry trip and Gala Performance.  It was on the Brittany Ferry trip that I was able to catch up with the treasurer of Brockenhurst Gateway Club to discuss plans for the Musical Mix Up, and the successful application for a £2000 matching District Grant.  The Lymington Times recently published a very good account of the Musical Mix Up with detail from Ken Garrod.  A very successful event, community in action, raising awareness on mental health, accurate publicity about us, Brockenhurst College participation and a final documentary for the District Conference in October, using the district grant.

An excellent article which for me answers my question of: did we succeed ?  We most certainly did.  For TLS we certainly tried and it worked, on the Golf Day and during the Christmas collections and also on a follow up day at Morrisons carpark in the Spring. So yes, we did succeed, but hard to prove.  We also succeeded with Wessex Heartbeat with the success from the fashion show and members supporting other events, and TLS now have Wessex Heartbeat as a customer and hopefully soon followed by Brockenhurst Gateway.

I have not mentioned the numerous other social and charity fund raising events which have been a great success, and so well recorded by John Robinson on our website.  My personal thanks to Sam for covering my role since March, thank so much to everyone, both those here tonight and those absent. The cards and e mails have meant so much to me during the last few months.  I wish Tim good luck for his coming Presidential Year and the operation of the new system for meetings which appears to be working well.

MESSAGE RECEIVED FROM PHILIP LATER IN THE EVENING AFTER THE EVENT :-

Hi everyone
Thank you so much for a wonderful handover evening, given the constraints.

Fiona and I would like to thank you for your gifts and it was so uplifting to be welcomed by a sea of friendly faces. I would have loved to have been able to personally thank everyone, both those there on the night and those absent. The cards and e mails have meant so much to me during the last few months.

I was always told at the start of my Presidency that I should do as I wanted. I am not sure that it turned out quite as expected but I think we achieved our stated aims.