The Rotary Club of Perth Centenary

The Rotary Club of Perth was founded in 1917 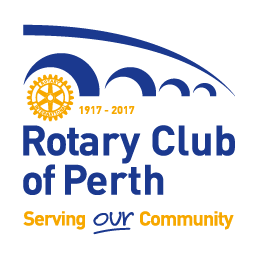 2017 has arrived and this brings with it a year of celebration of the Centenary of the Rotary Club of Perth. The updated history is being worked on by Alan Calderwood, and we hope to take it to print in the near future.

The first event of the Centenary Year will be a Civic Reception hosted by the Provost and Councillors of Perth & Kinross Council.

Rotary International was founded in 1905 in Chicago by Paul P Harris as a service organisation to bring together business and professional leaders. It now has 34,282 member clubs worldwide with 1.2 million members.

The club was founded after a visit by two members of the Edinburgh club. The first meeting took place in the Grand Temperance Hotel in Kinnoull Street on 26th March 1917 and the club received its Rotary Charter on 12th October 2017.

Amongst the 36 founder members were Sir Francis Norie-Miller, one of the founding figures of what became General Accident, and who was the first President, Frank Eastman, Chairman of Pullars of Perth, who went on to serve as President of the British Federation of Rotary Clubs, Sir Thomas Hunter, successively Lord Provost and MP for Perth, and Alf Brown, founder of seedsmen company Alexander and Brown.

The club met in the Salutation Hotel for nine years, moving to the Royal George in 1926 and then the Station Hotel in 1929. In 2008 the club moved to its present home at McDiarmid Park.

Over the hundred years of its existence the club has continued to play a major part in the community and charitable life of the city. As part of extending the work of Rotary the Rotary Club of Perth has founded several daughter clubs in the area including in Dundee, Blairgowrie, Crieff, Auchterarder and a further two in Perth – St Johns (1976) and Kinnoull (1992).

A major achievement has been fundraising for a wide range of charities in the local area and beyond. The first such event was a fete held in the grounds of Cleeve, the President’s home, in September 1918 which raised £2000, roughly equivalent to £88,000 in today’s values. In recent years the fundraising activities include the annual Silent Auction, held in cooperation with the Perthshire Advertise, a Charity Fayre in King Edward Street each August and a Charity Golf Day each May at the King JamesVI Golf Club. As a result of those and other smaller specific events some £50,000 annually goes to charities mostly in Perth but some further afield. Significant recipients in the past few years have been Cornhill MacMillan Centre, Scotland’s Charity Air Ambulance service and the childrens’ hospice (CHAS) at Kinross.

Projects involving community (non fundraising) service have included the provision of various social events for the elderly, the construction of a garden at Fairview Special School, and a raft of activities for youth as diverse as sports, cooking competitions, inter school quiz, leadership and skills training, interview techniques, and a creative writing competition amongst local schools.

As well as major international projects such as the one jointly with other local Rotary clubs rebuilding of a school in Sri Lanka after the 2005 tsunami, the club regularly pays for Emergency Shelter Boxes to be prepared and ready to be sent to areas worldwide hit by catastrophe. A similar but perhaps smaller scale exercise involve active participation in the Shoebox scheme for the supply of essential items for refugees and others displaced by disasters. Annual contributions are made to Rotary’s own worldwide charity, Foundation, one of whose long term missions – the eradication of polio from the world – nears success.

The club has a regular programme of speakers from a wide spectrum at its weekly meetings. Those range from local and national charities to historical and current affairs. The Entertainment Committee arranges a number of social events and those have recently included visits to Amsterdam and Prague

Golf, curling, and fishing all play an important part in the life of the club. The curlers have won the Scottish Interclub event many times and twice been winners of the World Rotary Championships and were the losing finalists in 2010. The anglers have dominated the Scottish Rotary competition for the last few years, and they, like the golfing members, play for various trophies within the club each year.

Since the 1990’s the Rotary worldwide has been broadened by the admission of women to what was previously an all-male environment and now prides itself on being inclusive, multi racial and faith, dual gender movement. The Perth club has benefitted from this and although the percentage of women members remains low, they play a significant part in the life of the club and the organisation of, and participation in both its charitable and social activities.

With the successful recruitment of younger business people as members, some of whom have begun to play their part in the leadership of the club, its future seems reasonably secure. However, there is always room for improvement and successive recent Presidents have been concerned to move the club on in ways that reflect changes in our society. The challenges of 2017 are very different from those of 1917 but there seems every hope that the Rotary Club of Perth will continue in its hundredth year and beyond to fulfil the motto of Rotary – Service above Self. 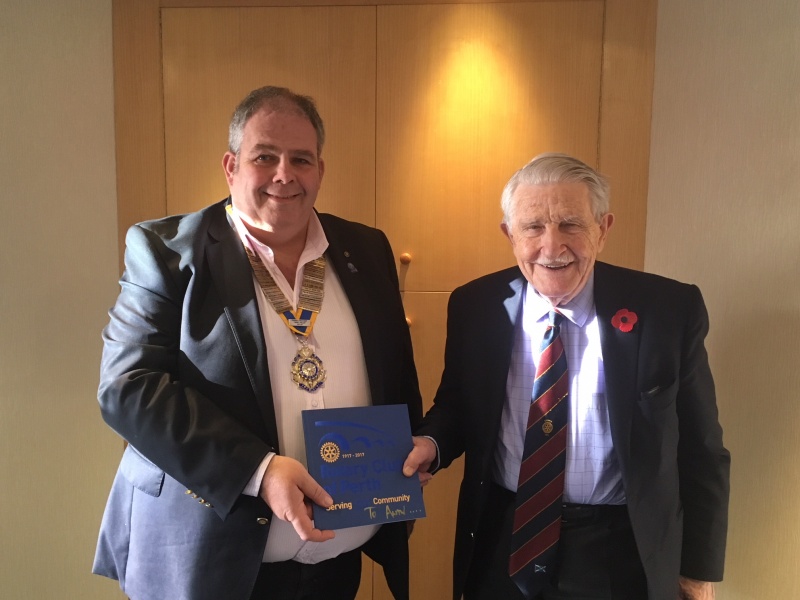 The photo shows David Linday presenting Alan Calderwood, author of our club's 100 year history with a copy of his book signed by all the members.