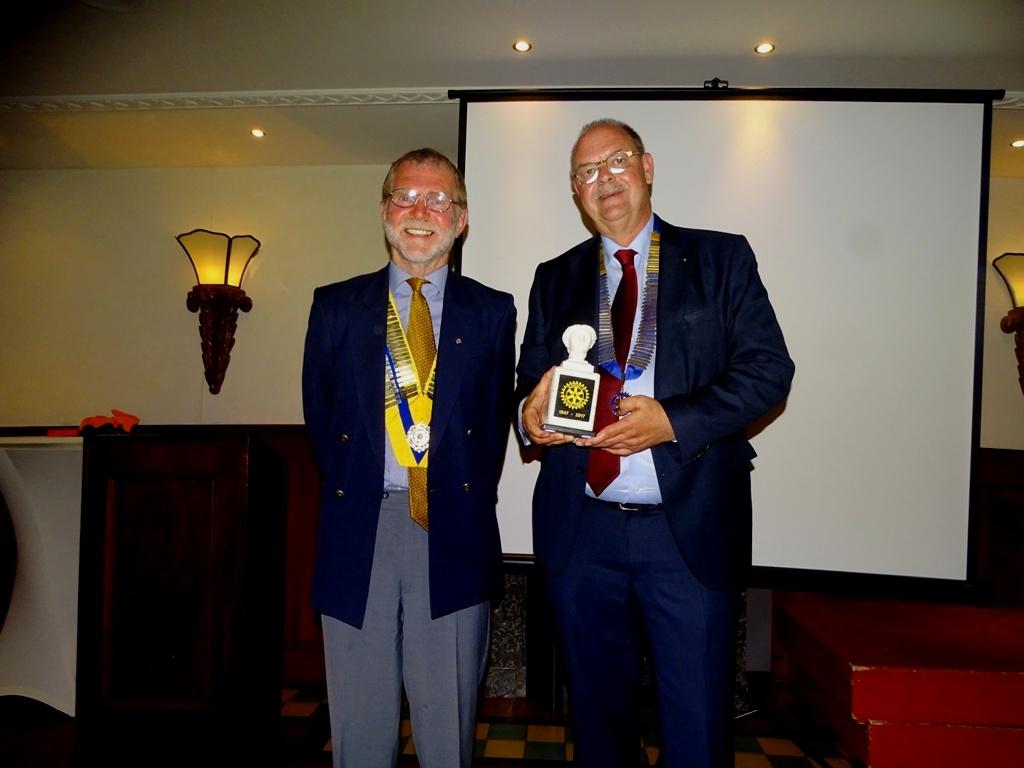 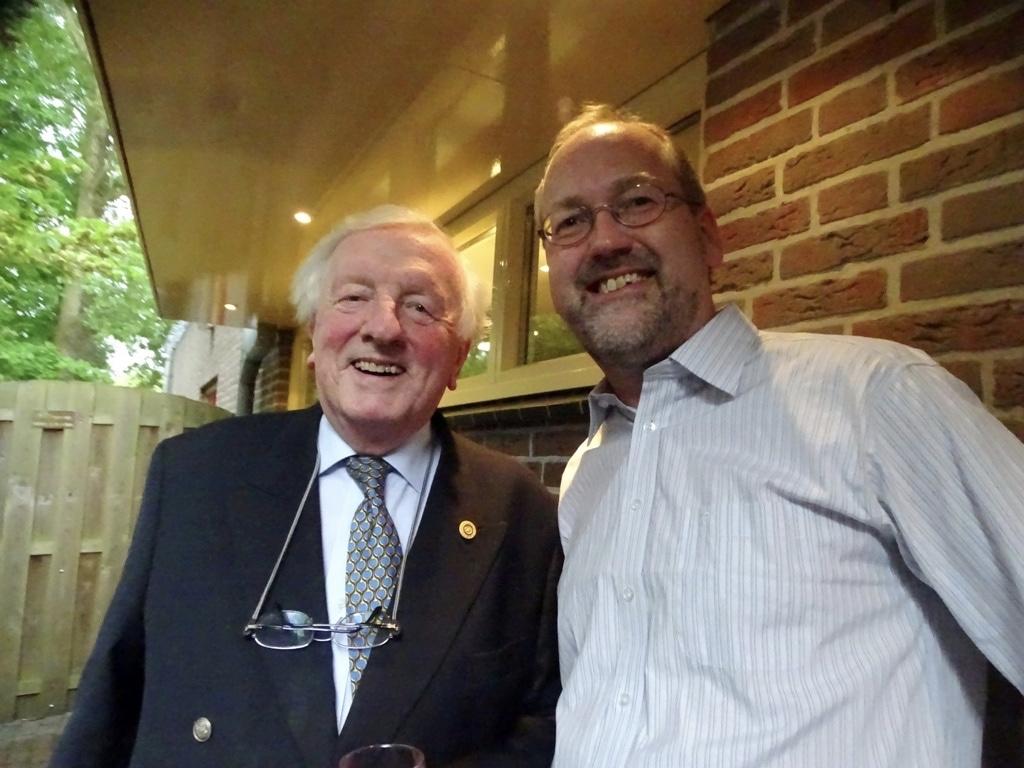 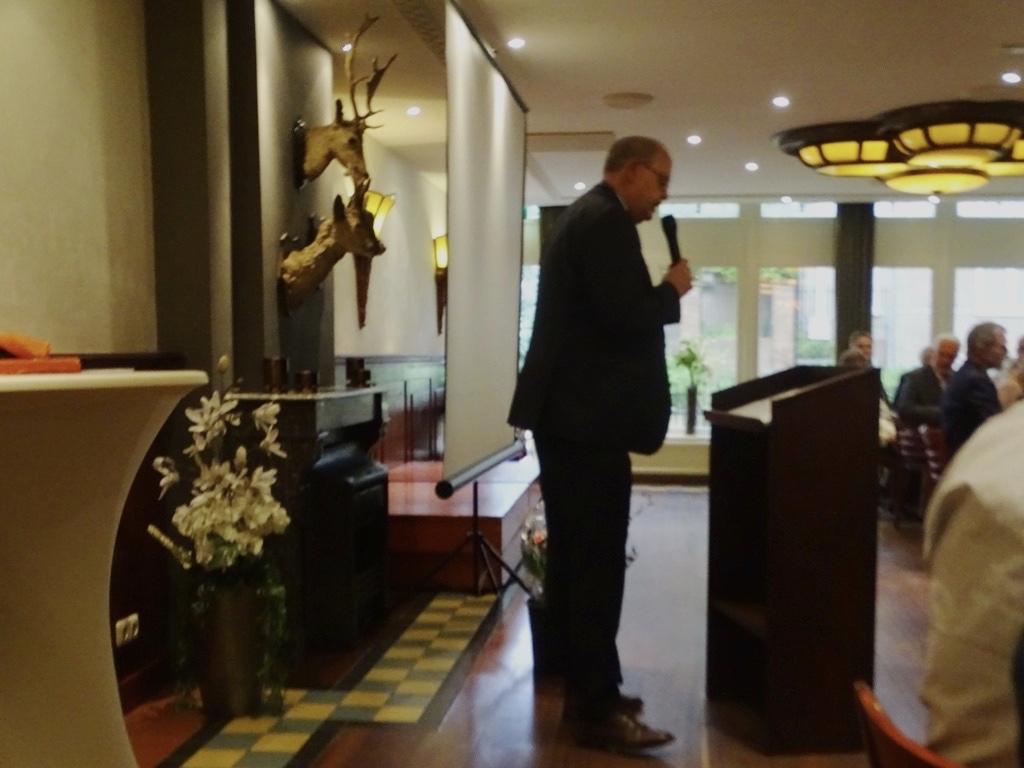 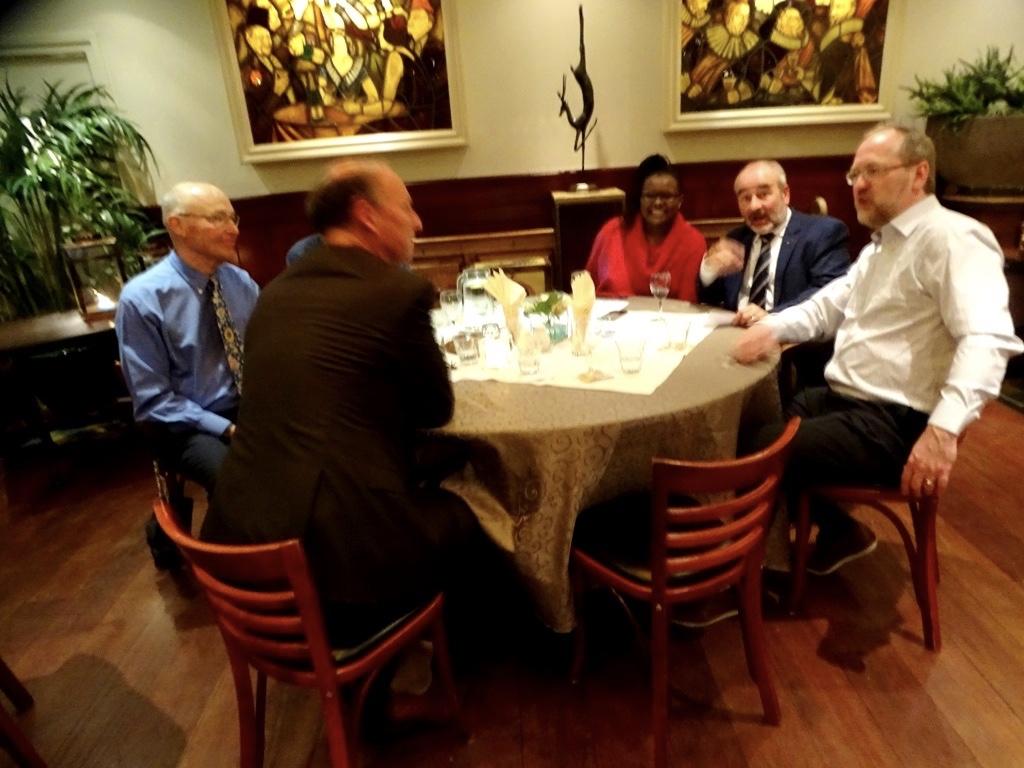 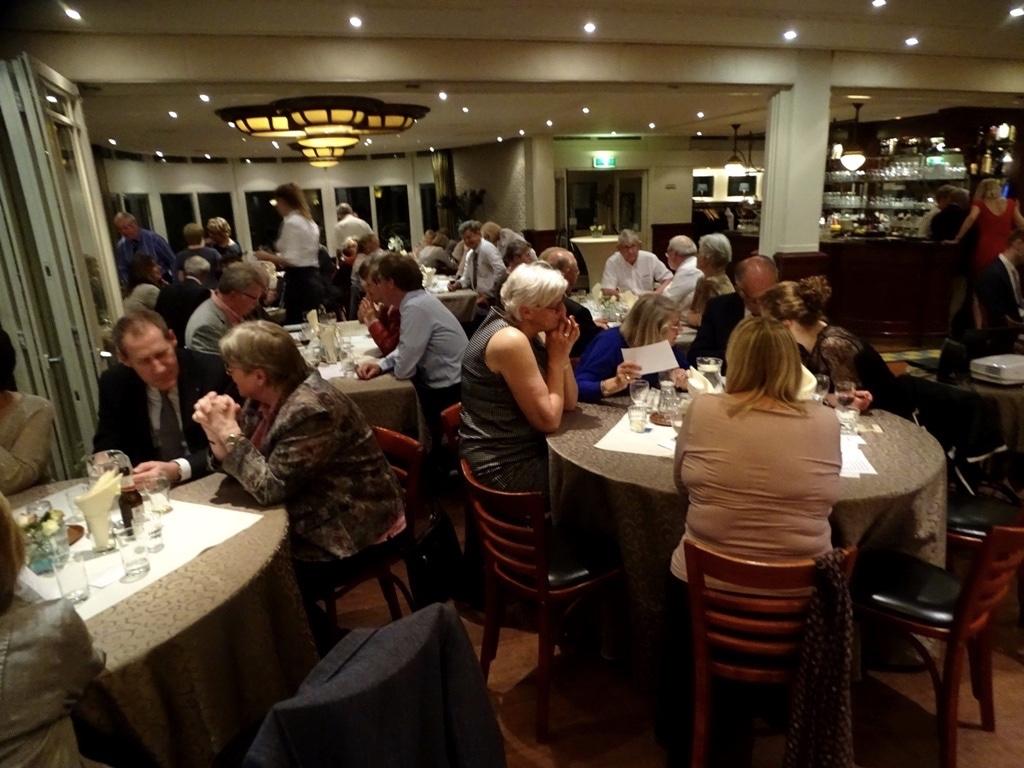 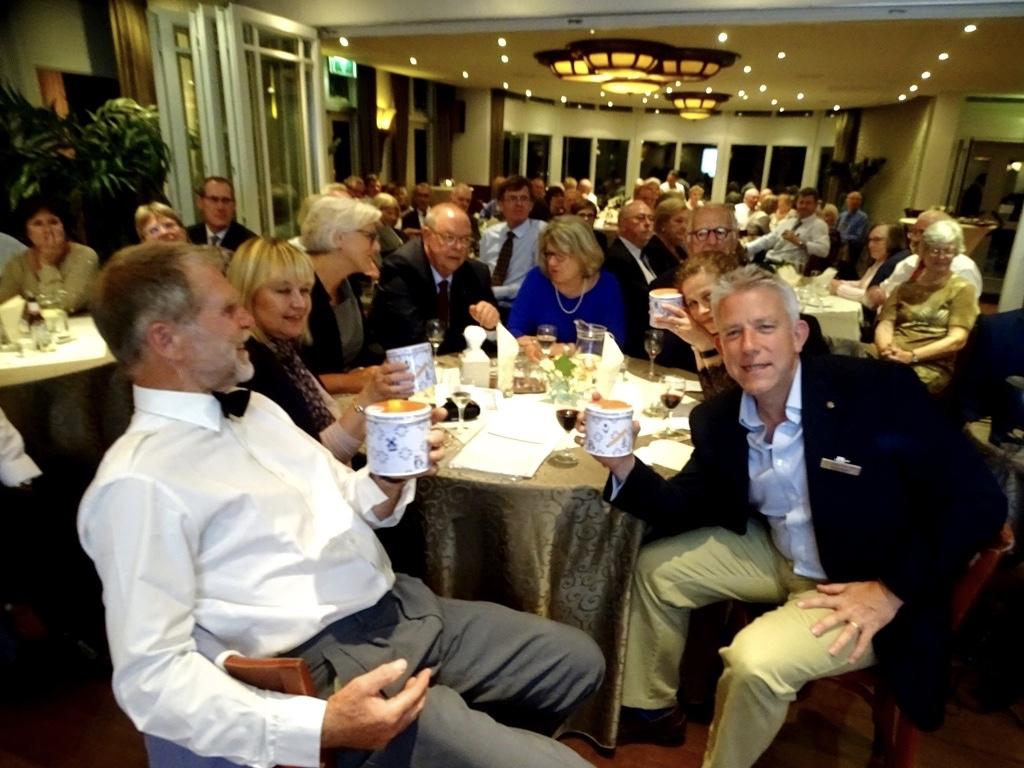 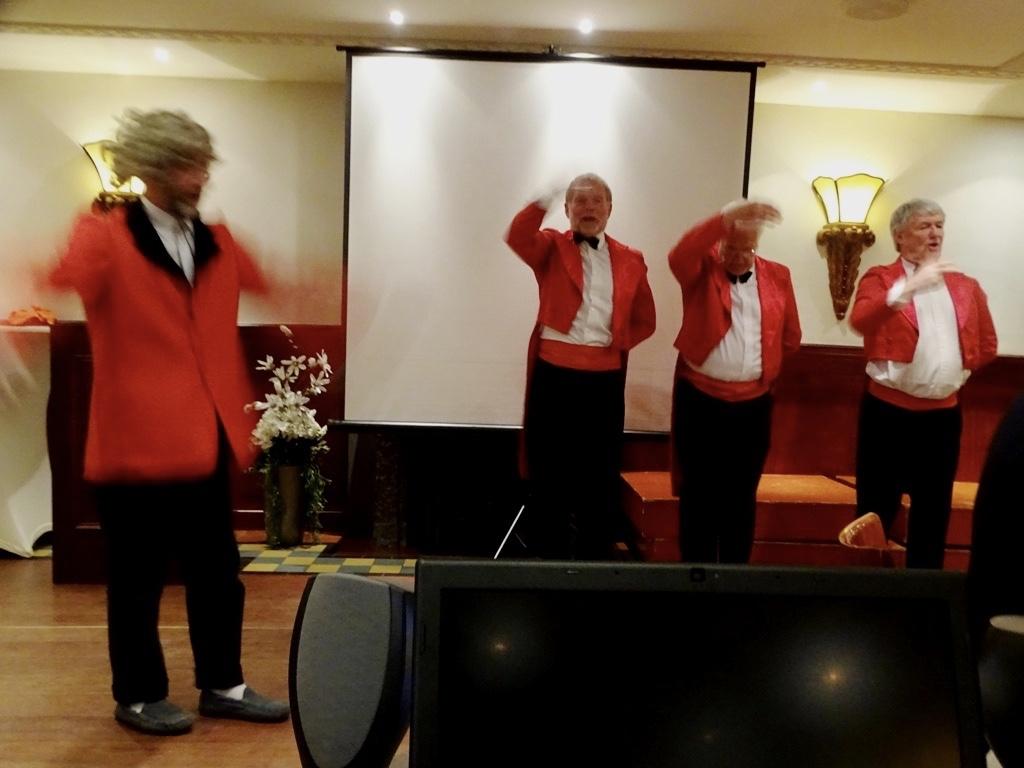 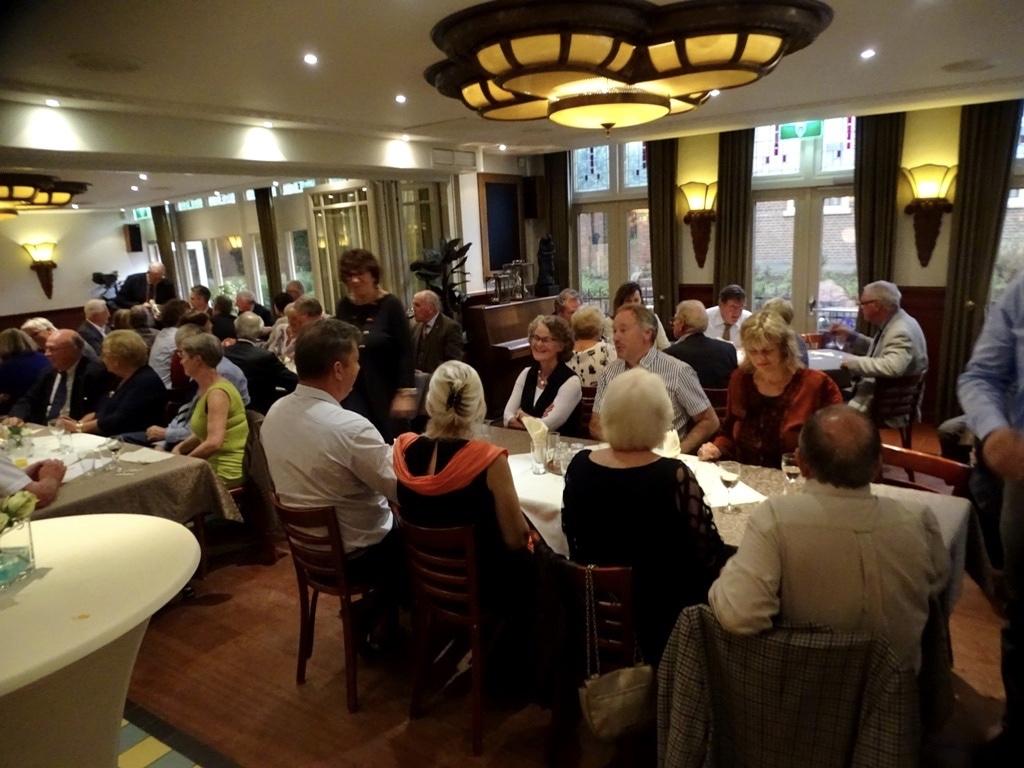 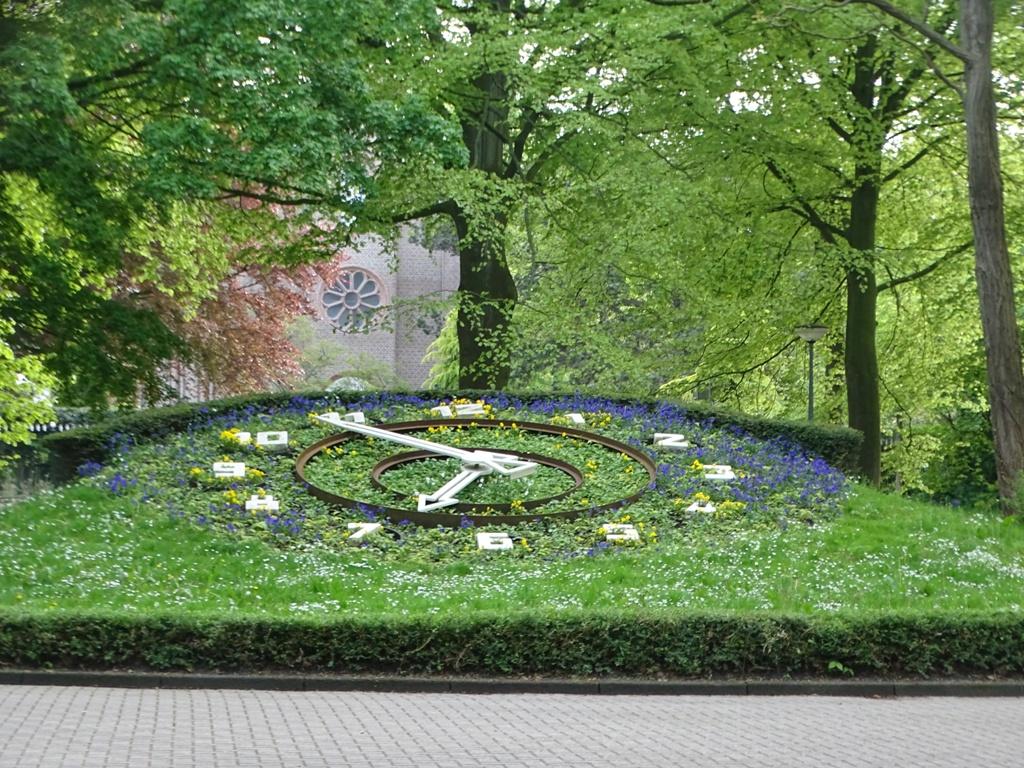 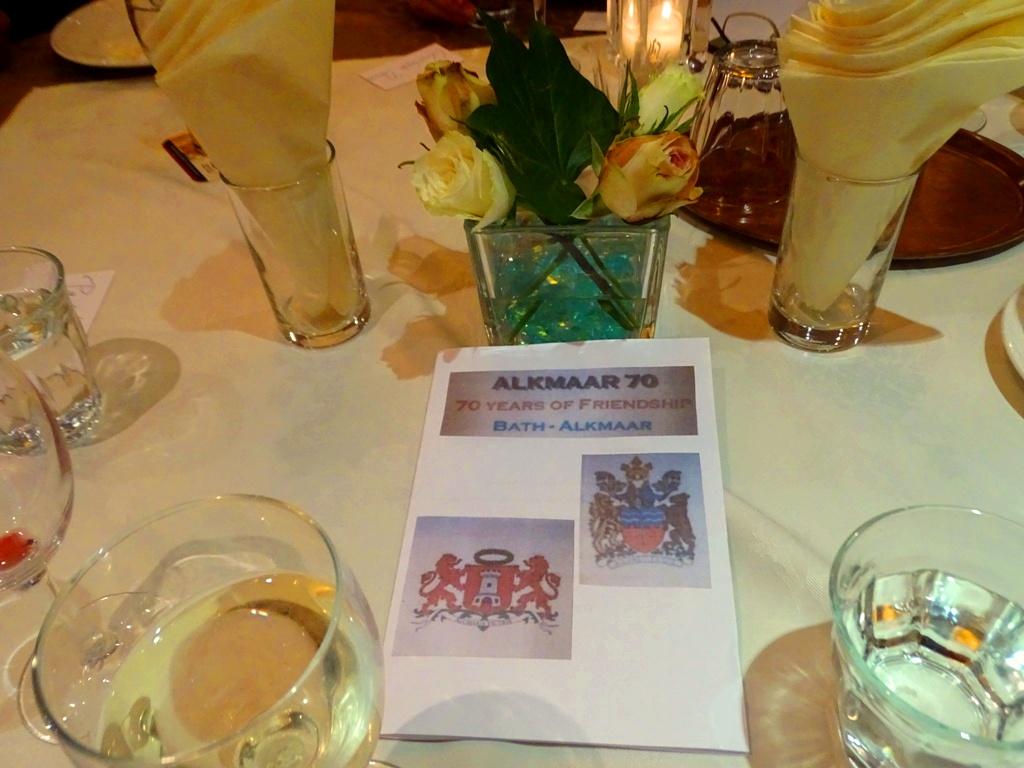 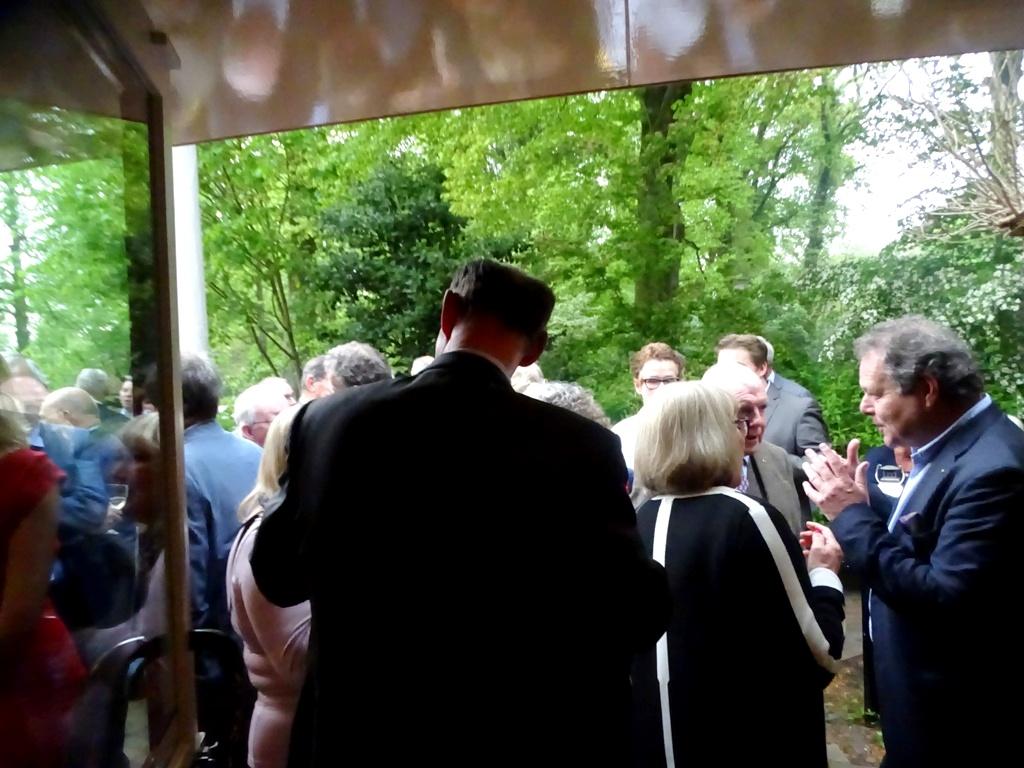 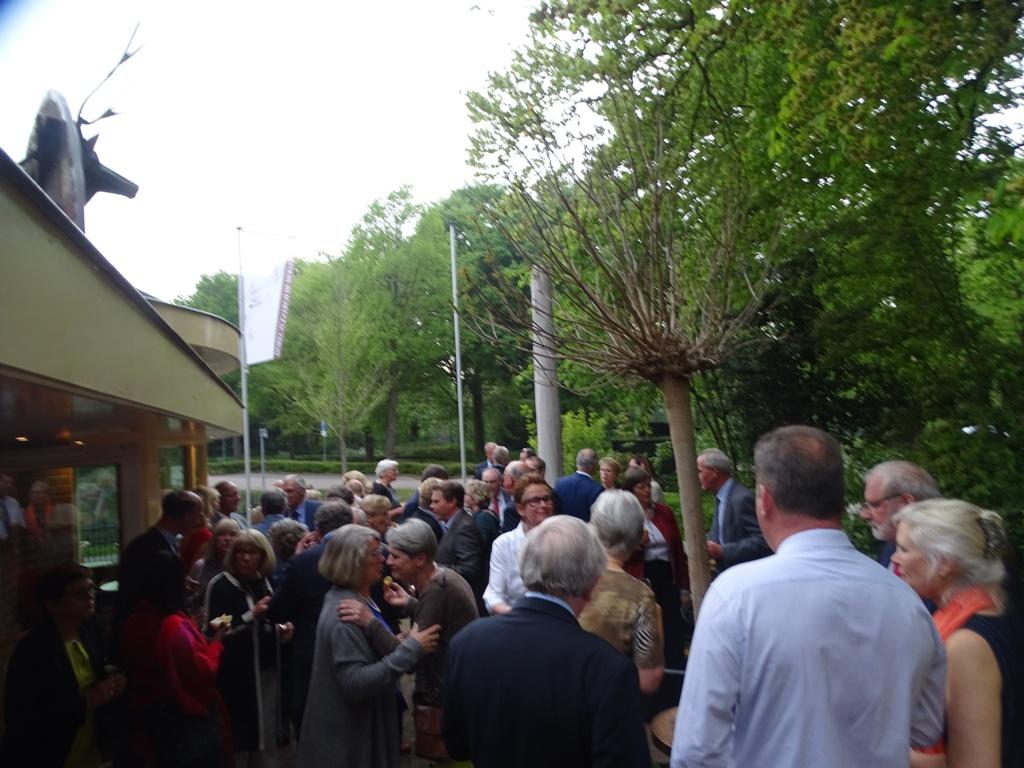 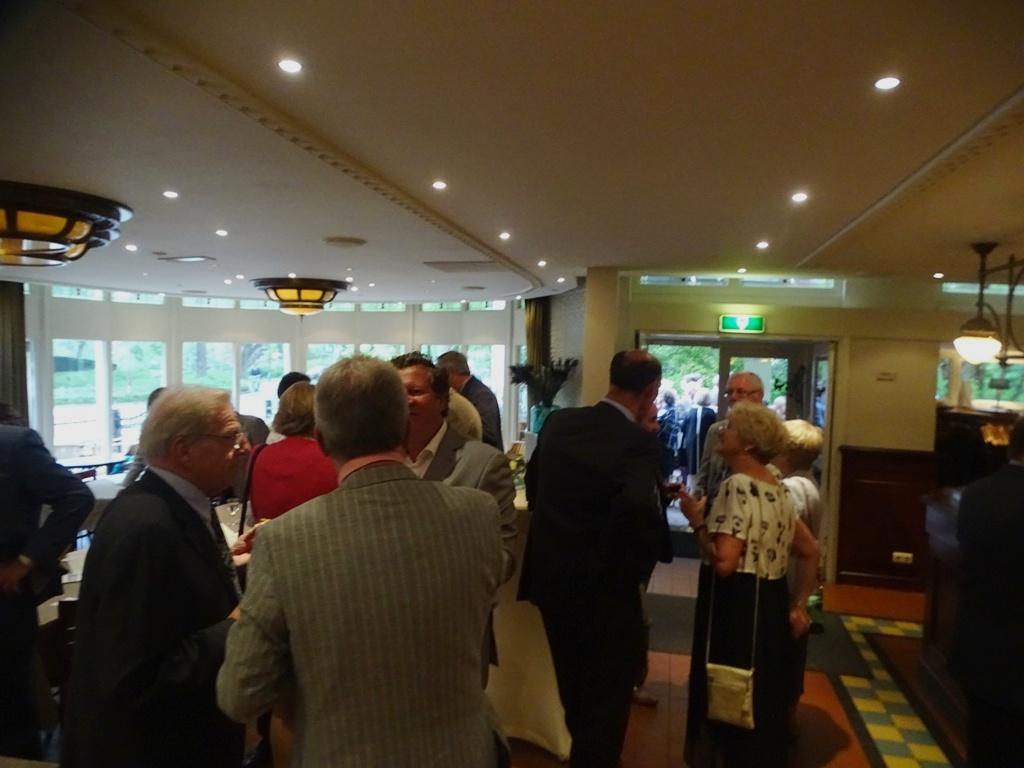 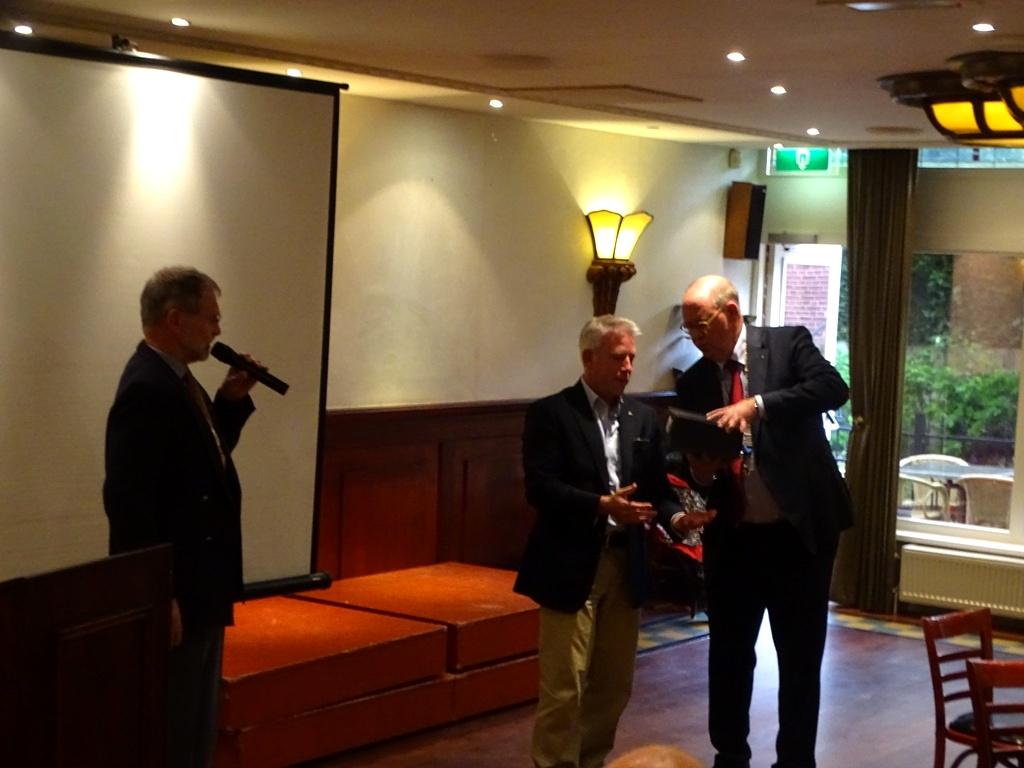 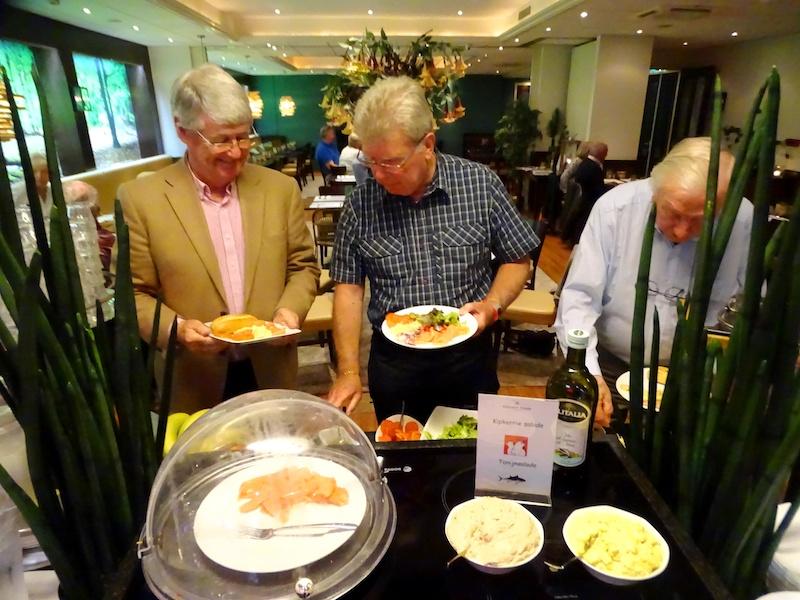 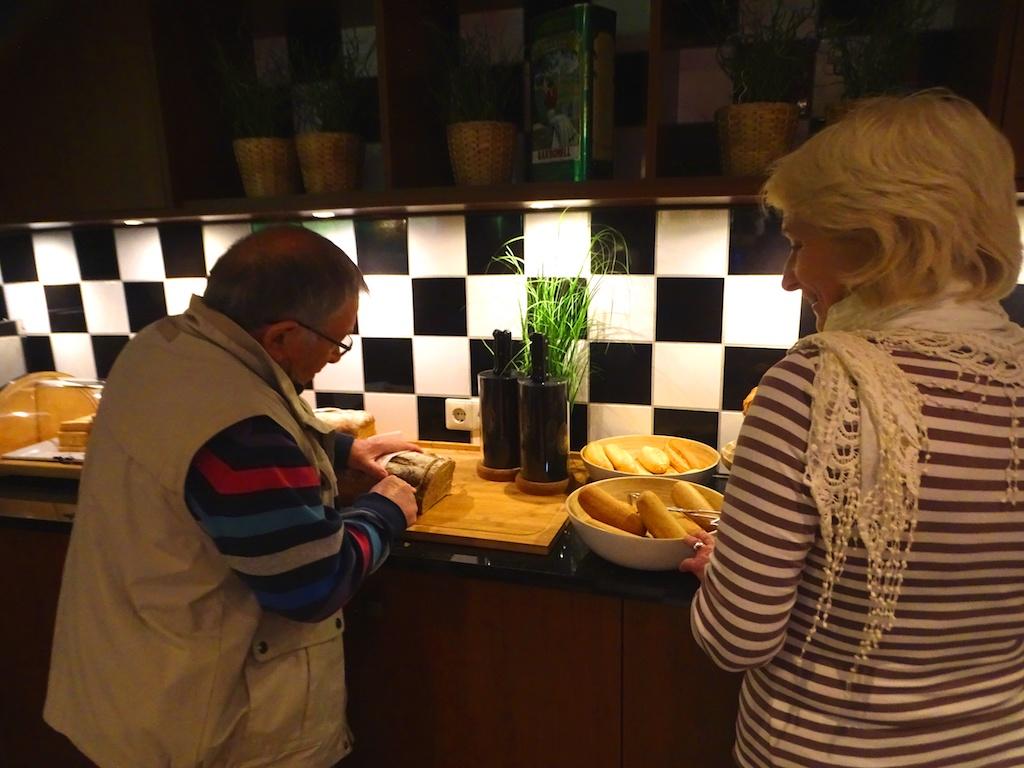 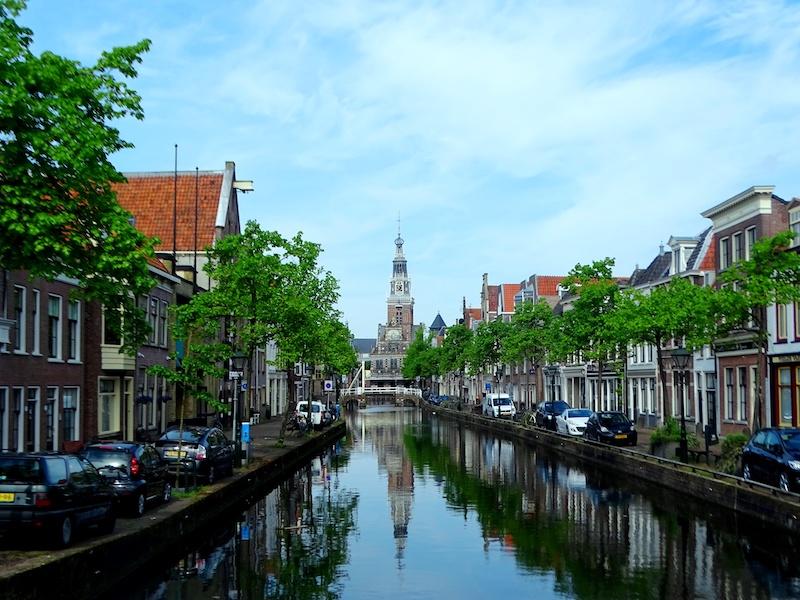 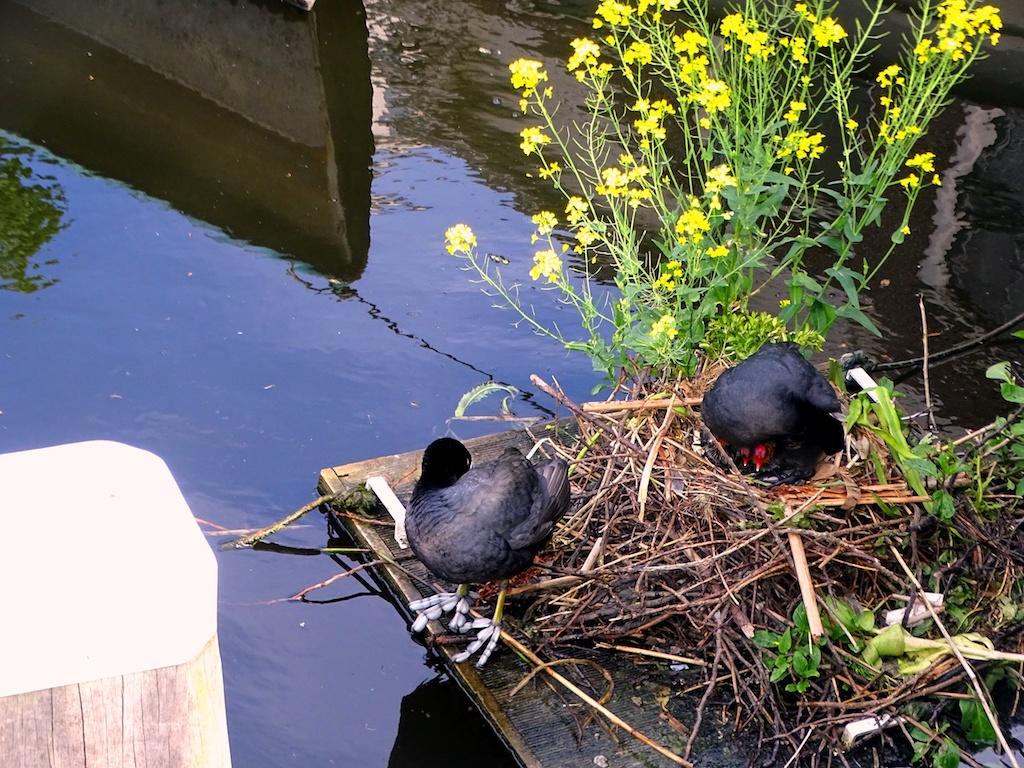 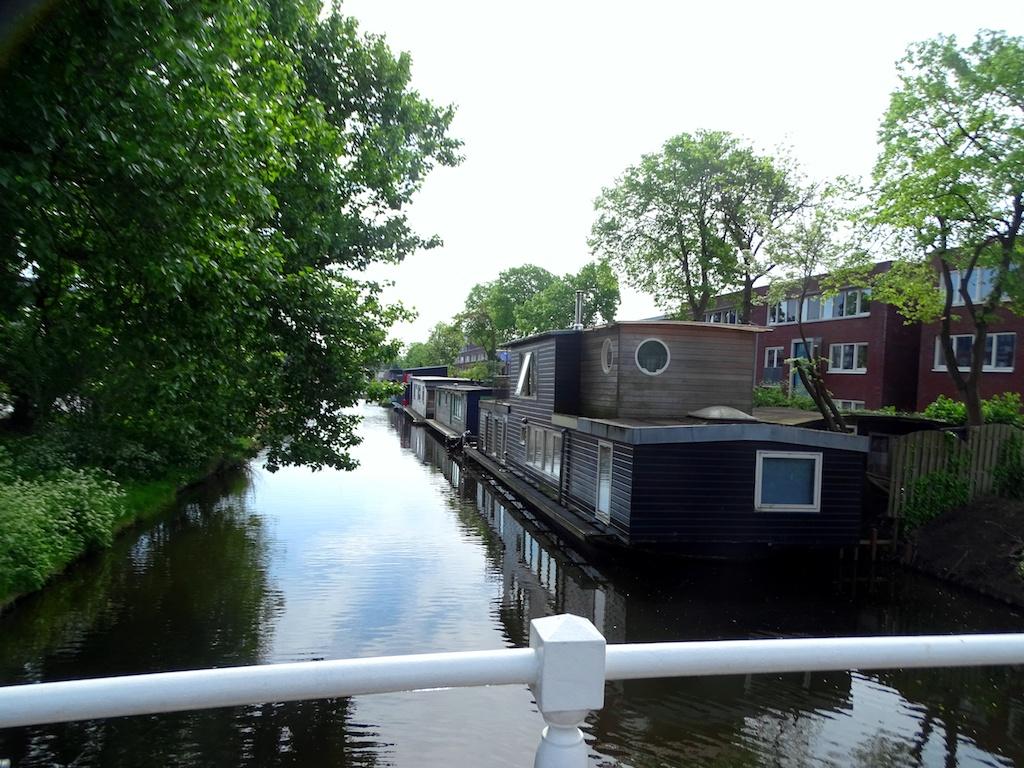 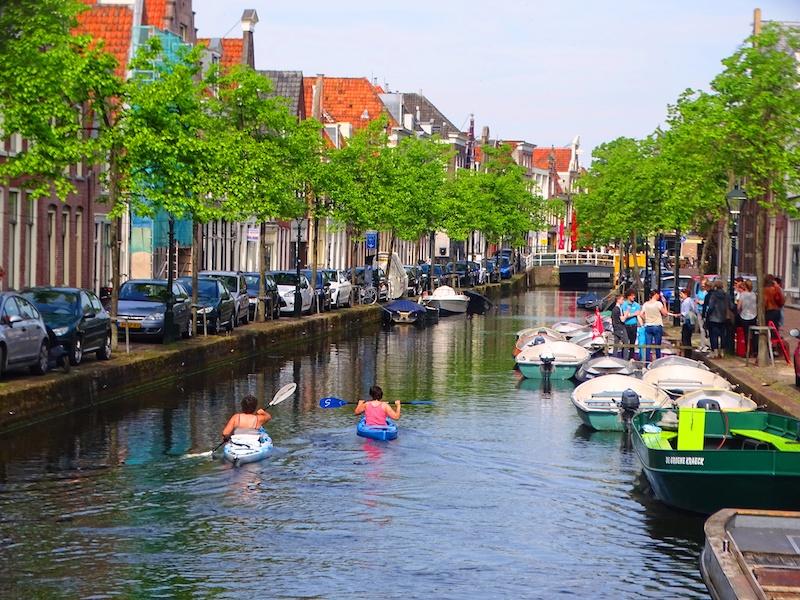 Presentation of the trophy by President John to the President of the Rotary Club of Alkmaar,  Klass Kirpensteijn,  to commemorate 70 years of Twinning between the Rotary Clubs of Bath and Alkmaar

President Klaas,  Rotarians, Friends and Cheeseheads. It is a great honour and privilege to be able to offer you formal greetings from the Rotary Club of Bath. It is only the second time that Sigi and I have visited Alkmaar but the memories of the warmth of your hospitality and the sites and culture of your beautiful city have remained with us over the last four years. I am pleased to say that that we have a number of new members discovering the pleasures of our close association for the first time as well as several who are renewing long-established relationships.

Of course, 2017 represents a particularly significant milestone in the history of our two clubs, marking, as it does, the 70th anniversary of their twinning  - surely one of the oldest between two European cities. Our visit is just one of the many events being held to celebrate a bond which strengthens and develops by the years and we look forward to welcoming your Mayor to Bath in July to further cement the link. I suspect his arrival will be a far cry from that of Burgomaster Jonkeer van Kinschot in July 1945. Having been invited by Rotarian “Jimmie” Wills to attend a fund-raising Ball in the Pump Room, he arrived,  courtesy of the US Air Force, with borrowed clothes, £1 in spending money and three words of English – “ Mr.Wills – Alkmaar.” But, the history of the Bath – Alkmaar link, as many will undoubtedly  know, begins with the extraordinary adventures of Eli Prins who escaped the Nazis to join his sister in Bath in circumstances worthy of a James bond film! It was a particular pleasure,  therefore, to be able meet his son, Professor Gwyn Prins, at the end of March when he was entertained by our Mayor to luncheon at the Guildhall. He brought with him a treasure-trove of family documents including an original copy of Eli’s address to the Rotary Club of Bath soon after his arrival in 1940. Of course, the object that symbolises the lasting bond between Alkmaar and Bath and their Rotary Clubs is the famous barrel-organ  that now resides in your City Hall. I am delighted to say that, as part of this year’s celebrations, our two clubs are working closely together to try to restore it to full working order.

But it has not always been that the Dutch and English have been on such amicable terms! Throughout the 17th Century, commercial and colonial rivalry led to several battles to establish superiority at sea and over the world’s expanding trading posts. Indeed, this year marks an anniversary that we English will wish to forget – the 350th Anniversary of the Battle of Chatham when Dutch ships sailed into the Medway, set fire to a large part of the English fleet and captured the flagship – the Prince Charles. So perhaps as one of the many things that we wish to claim back from Europe as part of Brexit,  we could ask for the return of the transom of the Prince Charles which is currently displayed in the Rijksmuseum!

But we are here to celebrate the things that unite us. The closeness of our cultures is  frequently  reflected in the many words and phrases that we have adopted from and directed towards one-another. Many of our nautical terms are of Dutch origin - “yacht “ : { I particularly like } “ Dutchman’s Breeches” ( “trousers” – patches of blue sky before a gale )  and there are many common sayings in English which recognise the association : -  “Dutch courage”, “a Dutch Treat” and “Dutch Metal” are not exactly complimentary terms,  but to have a “Dutch Uncle” is to enjoy kindly advice and to “Beat the Dutch” is to do something remarkable!!

Tree-lined canals that were under the ocean,

Polders that shimmer with barely a motion,

Boys that plug sand dykes with only their fingers,

Scent of the tulip and lily that lingers,

When the pound falls,

When the plains flood,

And then we don’t feel so bad.

‘The Night Watch’ of Rembrandt, a Pearl from Vermeer,

Cheeses as gold as a harvest full-moon,

Almond cake, pastries and cream by the spoon,

Smoked eel and herrings and eggs from lapwings,

When the pound falls,

When the plains flood,

When the Queen is sad,

And then we don’t feel so bad.