A Wonderful Venue And Engaging Speaker Contributed To A Charter Celebration To Remember. 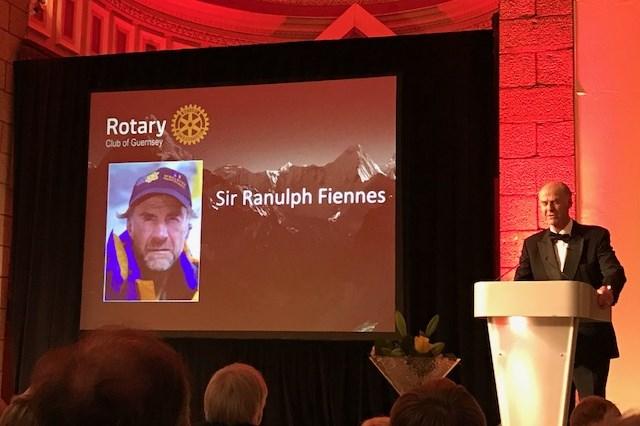 The Club’s 2018 Charter Dinner was deemed a great success due in no small measure to the wonderful surroundings offered by St James Assembly Hall in the heart of St Peter Port and a ‘top draw’ after dinner presentation by Sir Ranulph Fiennes, considered by the Guinness Book of Records as “The World’s greatest living explorer.”

The annual Charter Dinner returned to St James this year in recognition of it being the Hall’s bi-centennial anniversary. The hall was crammed to capacity to enjoy a four course dinner, following which President Simon Milsted made a Paul Harris Foundation Award to Rotarian Pat Johnson.

Simon referred to Pat’s extensive work within the Island Community on major projects such as Floral Guernsey, The Memorial to Wartime Airmen lost off our shores and the refurbishment of the Little Chapel. Initiatives a bit closer to home were also mentioned, including elevation through the RHS of our own local Purple Crocus project to bring about a truly Nationwide initiative promoting Rotary’s End Polio Now Campaign and the regular occasions when Pat’s own magnificent garden is given over to the Club in its hosting of fundraisers.

The toast to the Club was made by Sarah Cash, president of our sister club, Rotary Guernesiais. In his response to the toast Simon remarked ”how good it was to see all the presidents of the Guernsey Rotary Family represented in the room”.  Alongside he and Sarah were Presidents of the Inner Wheel Club of Guernsey and Friends of Rotary Guernsey.

The best was left till last. A barnstorming performance was given by the President’s guest of honour, Sir Ranulph Fiennes.  He recounted for over an hour anecdotes from his school years, his life in the SAS and lifelong career in undertaking extreme expeditions.  His casual and humorous delivery gave an insight into Sir Ranolph’s positive and lighthearted character that keeps him so well grounded during the extreme punishment of his various extended expeditions in some of the World’s harshest of climates (hot and cold!).

The presentation ended with a brief Q&A session and a standing ovation for Sir Ranulph.

One of the groups in the room who were particularly enthralled by the presentation was a selection of recent Gold candidates of the Duke of Edinburgh Award Scheme. Sir Ranulph gave up time to meet them personally at the conclusion of the evening and presented each with a signed book written by him describing some of his exploits in Polar Regions.

Simon Misted was pleased to announce earlier this month that he has secured a first class celebrity to speak at this year’s Charter Dinner due to be held at St James on 13 April 2018.

Simon said “I am really pleased on two counts:

"Firstly that we are returning to St James to hold our celebration Charter Dinner. St James is celebrating its bi-centenial anniversary in 2018 so I felt it was particularly fitting to take our annual dinner back there in support of this much loved venue in the heart of the Guernsey community .

"Equally exciting is that we will be joined by Sir Ranulph Fiennes as our after dinner speaker. Ranulph is known to me from my former life in Somerset. He is a truly inspirational individual, ranked by The Guinness Book of Records as "the World’s greatest living explorer". I can guarantee he will deliver an enthralling presentation following our Dinner.”

Unsurprisingly this event is showing all the signs of being a ‘sell out’ evening and a great night out for club members, club sponsors and club friends alike.