After six months hard work the ‘Hidden Haven’ has been officially opened at Lockyer’s School, Corfe Mullen. The ceremony was performed by Robert McBain, Chairman of Wimborne Rotary Charity Committee.

The ‘Hidden Haven’ is a tranquil garden corner for use by pupils and staff at this busy school and was created on what had been a very overgrown corner of the school site.

Steered by the School Council under their Chair, Chloe Jenkin, together with support from Governors, School Council members , parents and teaching staff the site was cleared, grassed and furnished to create a space where pupils can find a peaceful spot for discussion or learning.

The opening was supported by Chris Costin, Chair of Governors, Building and Premises, Mark Legge, Head Teacher and teacher Alison Shivas who has been closely involved in the launch of this space. Other School Council members attending the opening were Fletcher Harries, Kenzie Speller and Lewis Johnstone.

Before cutting the tape to formally open the ‘Hidden Haven’ Robert McBain told those present that they had achieved a great deal since his visit earlier in the year and said that, “the Hidden Haven provides a space for pupils and teaching staff to interact in an environment which is restful and creative”.

Robert added that Wimborne Rotary had been pleased to be able to support the project by the donation of a bench seat and garden equipment storage. 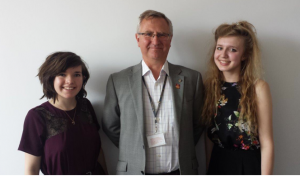 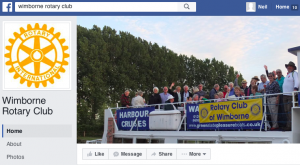 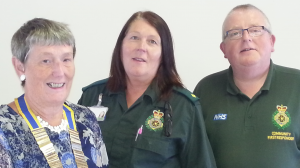 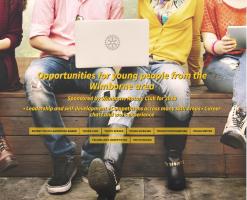