The new RotaKids team takes up the challenge for 2017-18. 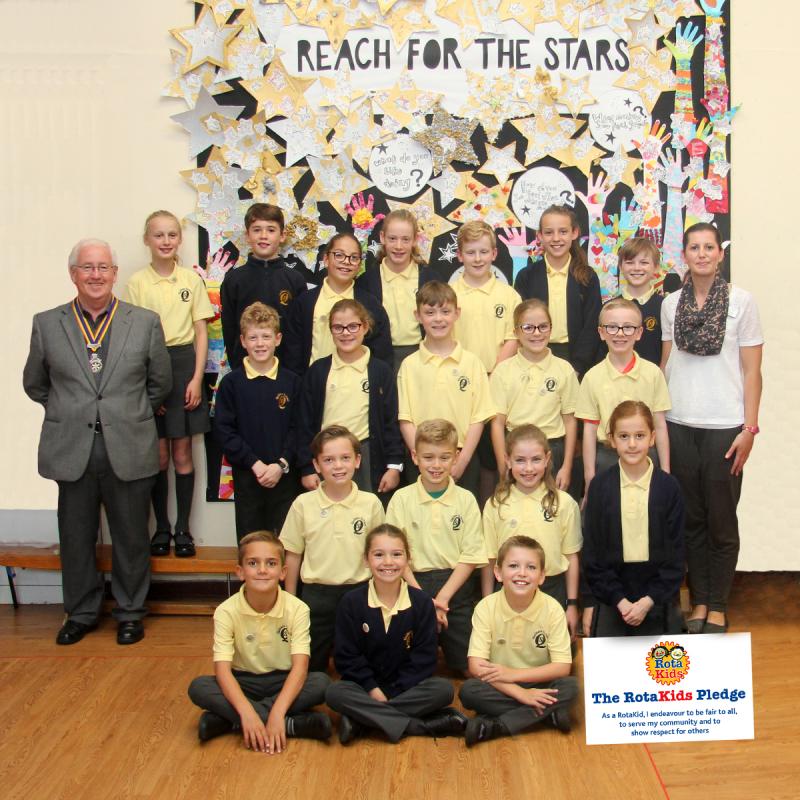 A new school Year and new members for the Quilters RotaKids club.  Every year school children can put themselves forward for election to the new RotaKids Club and School Council, and the whole school votes to elect their chosen representatives.
Helen Kilby, lead teacher at Quilters Junior School for the RotaKids said “This year, we tried something different.  We thought that it would be good for the children to try to emulate the parliamentary elections, so every candidate was asked to prepare a speech on why they should be chosen, and answer questions from their electors.  The only restriction, the officers of the club (President, Secretary, etc.) had to be members from last year so that there was some continuity from the previous year.  The experiment was very successful with enthusiastic participation from the children.”
It was a daunting prospect, but still many children wanted to try and the 20 members, two from each form were duly elected.
On Friday September 29, Rotary Club of Billericay’s Youth Officer Mike Sinclair, and President Peter Greene, attended the inaugural and successful meeting of the new club.

The whole group, led by their vice-president, reciting the RotaKids pledge followed by president Peter making a short speech welcoming the new club members to the family of Rotary and encouraging them to choose their supported charity so that they can start planning how they will raise money for it.  Each member then received their RotaKids Badges, and finally, the officers were presented with their badges of office.
President Peter remarked after the meeting “The Rotary Motto is ‘Service before Self’ and it is very good to see so many children eager to join the RotaKids club and help serve their school and their community.  We are looking forward to their participation with us at the Christmas Market when they will be helping us sell raffle tickets in aid of St Luke’s Hospice, Aquabox and other charities supported by Rotary.”
We hear that there is also a secret project under discussion – so - “watch this space”.