Esther Ersfold Mandujano a 4th year pupil at Douglas Academy won the Instrumental Prize at the District Final of Rotary Young Musician held in the Royal Conservatoire of Scotland. Unfortunately Esther was unsuccessful at the Regional Final. 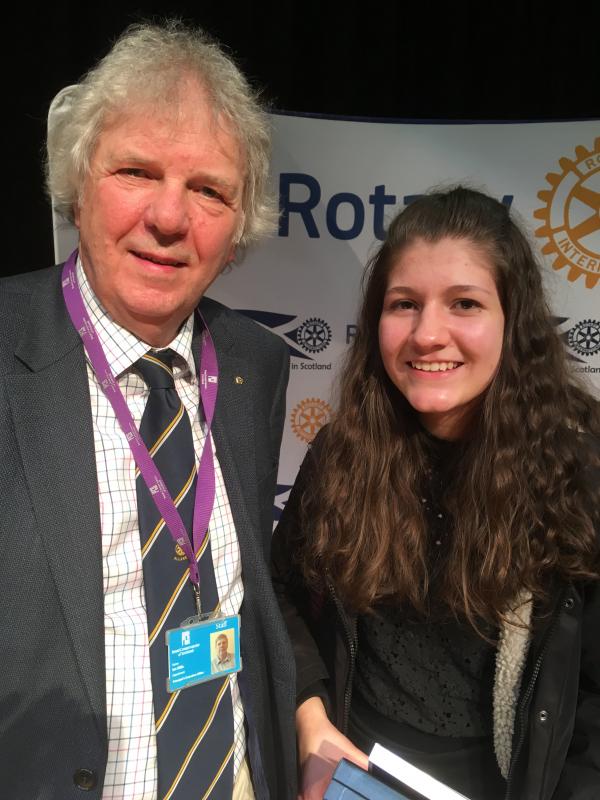 Esther competed in the Regional Final on 22nd April, again at the RCS but didn't come away a winner on this occassion.

Esther Ersfold Mandujano a fourth year pupil at Douglas Academy has won the Instrumental Prize at the Rotary District Young Musician final held in the Royal Conservatoire of Scotland (RCS)
Esther was sponsored by Allander Rotary Club having earlier won the local completion for young musicians in the Bearsden/Milngavie area. She will now go forward to the Rotary Regional final on 22 April and if successful the UK final for Rotary Young Musician in May.

Photo is Allander Rotarian Ian Mills with Esther after the announcement.

Rotary Allander would like to thank Douglas Academy, particularly Head of Music School, Mark Evans for hosting and organising our Young Musician competition on Wednesday 7th February 2018. We would also like to thank our Adjudicator, David Watkin, Head of Strings at Royal Conservatoire Scotland. VIt was very competitive Young Musicians competition. Judge David Watkin commented on how difficult the decision was and that pupils should appreciate how lucky they were to have the teachers they have and in particular the support of Claire Haslin who accompanied some of the competitors during the competition. An enjoyable evening with commendations to Erin Black, Hugh Kaliski, guitarist Jacques Carroll-Leitao and pianist Matthew McIlree for his rendering of "The Tom & Jerry Show" by Japanese composer Hiromi Uehara. The piano took some punishment from gutsy performances. Winners were Voice Lara Anderson Instrument Ester Ersfeld Mandujano on piano. They go forward to District final at Royal Conservatoire of Scotland on Sunday 18 March 2018. Winners of District go forward to Regional Final on 22 April also at RCS. Competitors not yet mentioned who also deserve to be recognised for their contribution to an enjoyable evening (in order of performance) are Sarah Greer (voice), Raj Bhaumik (clarinet) and Clara Daley (cello). All of the competitors received feedback from the adjudicator 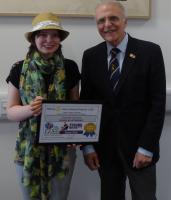 Sarah Greer is presented with her certificate as 2018 Winner of the local Senior Young Writer's Competition. Young Writer is a well established and successful competition promoted by Rotary International in Britain and Ireland. 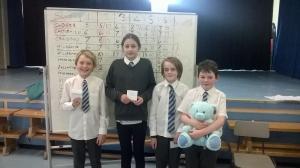 Following their win in our Annual Quiz for all of the Primary Schools in Bearsden, Milngavie and immediate surrounding area (13 primary schools) Milngavie have now successfully won the West of Scotland District Competition. 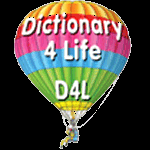