OUR CHRISTMAS PARTY AT THE CROWN

A super festive evening with fun entertainment by a well known concert party, As a bonus two members were surprised and delighted to be awarded very well deserved Paul Harris Fellowships. 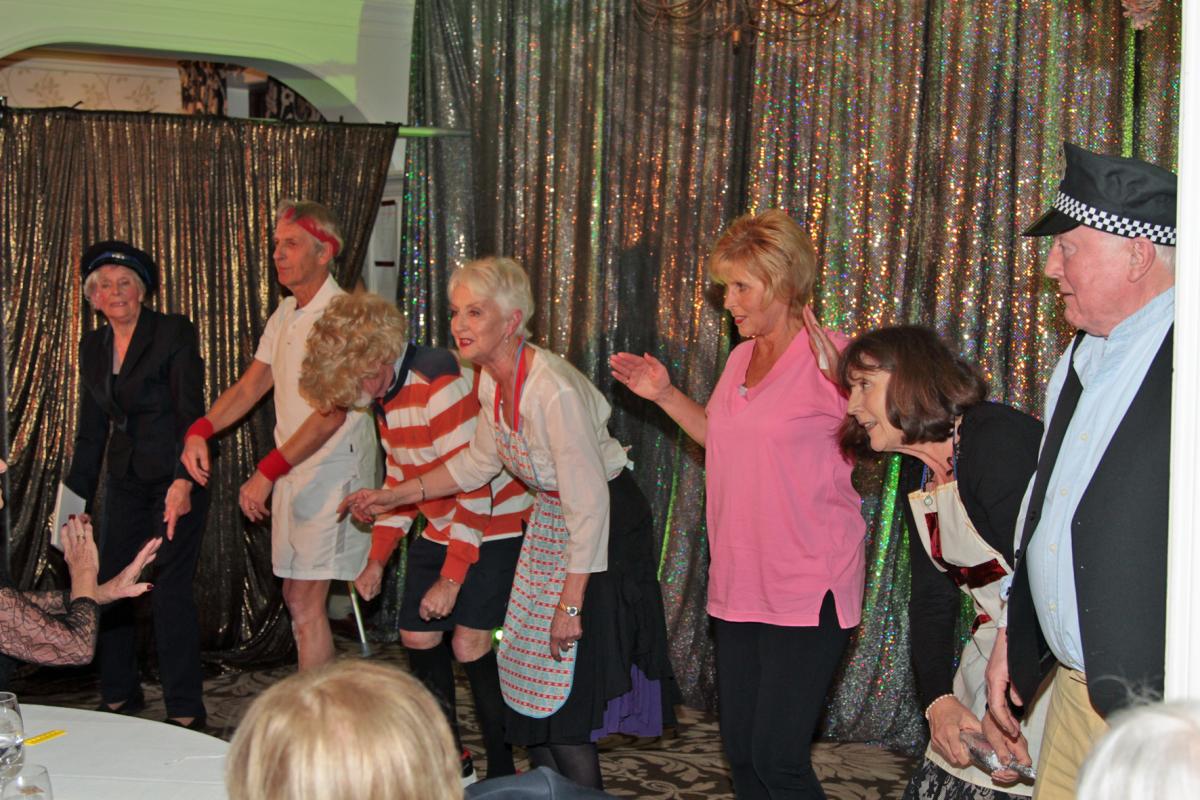 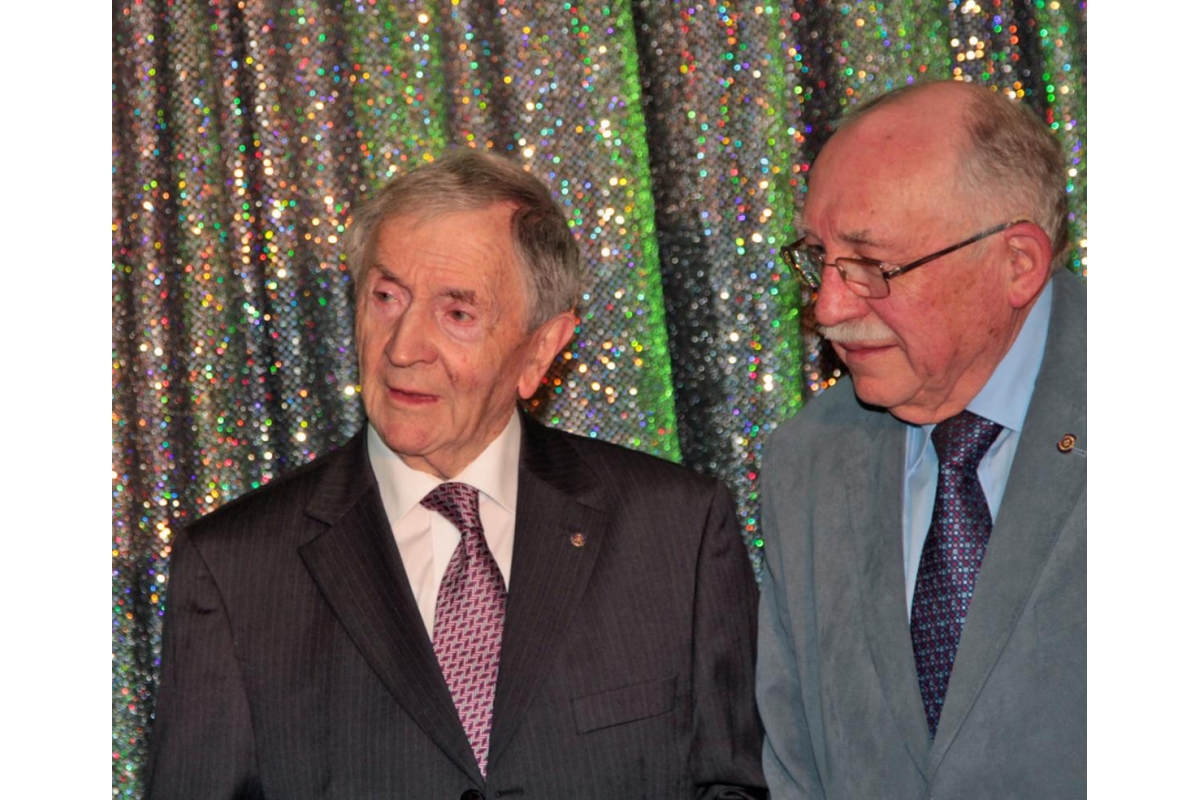 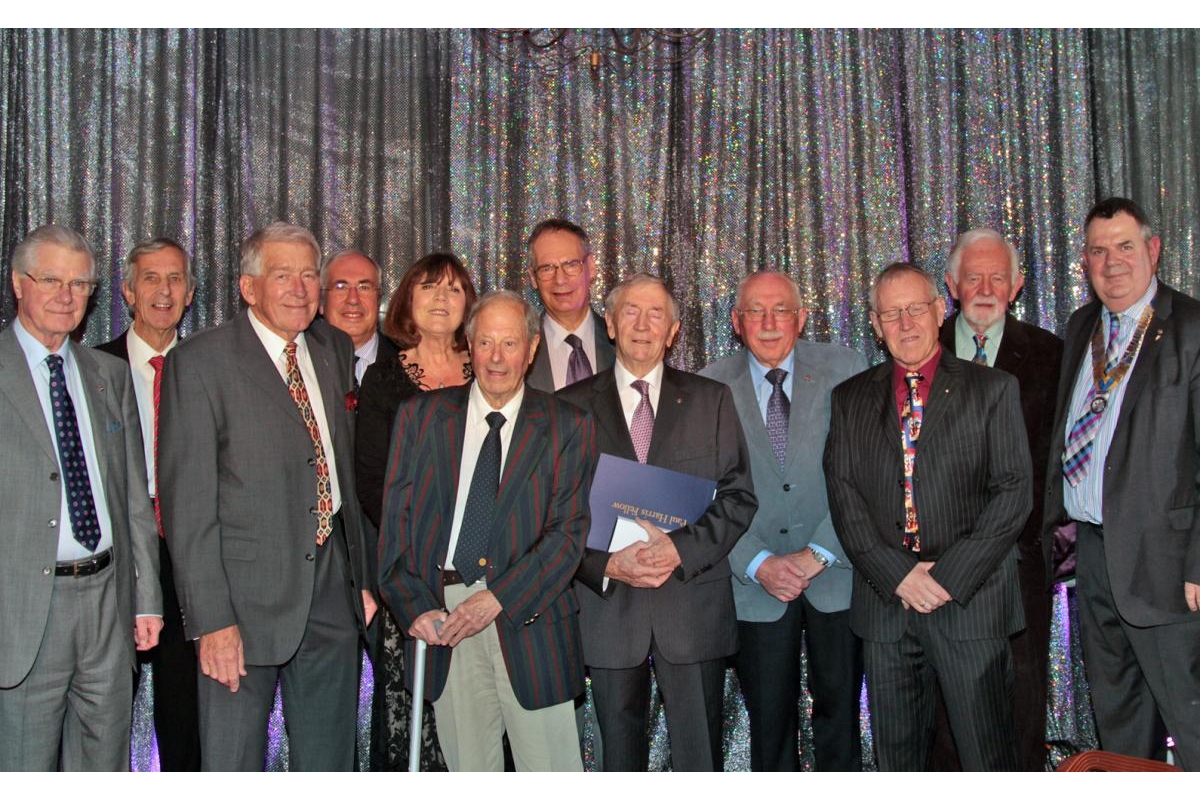 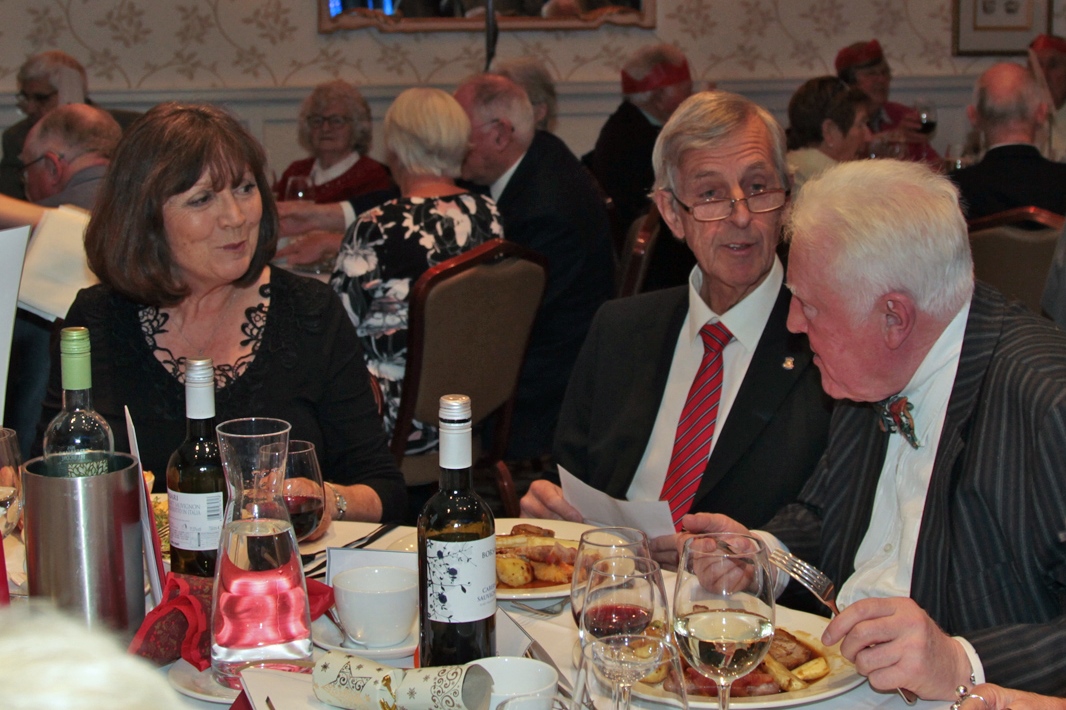 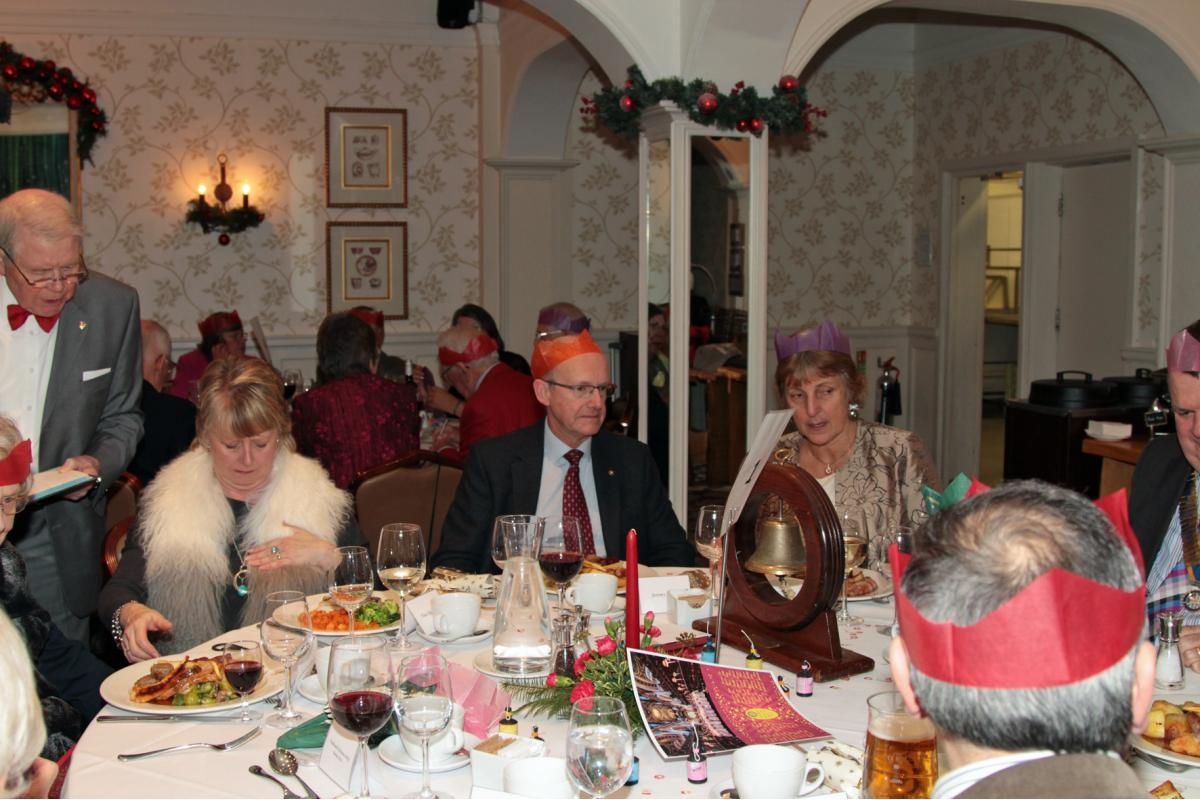 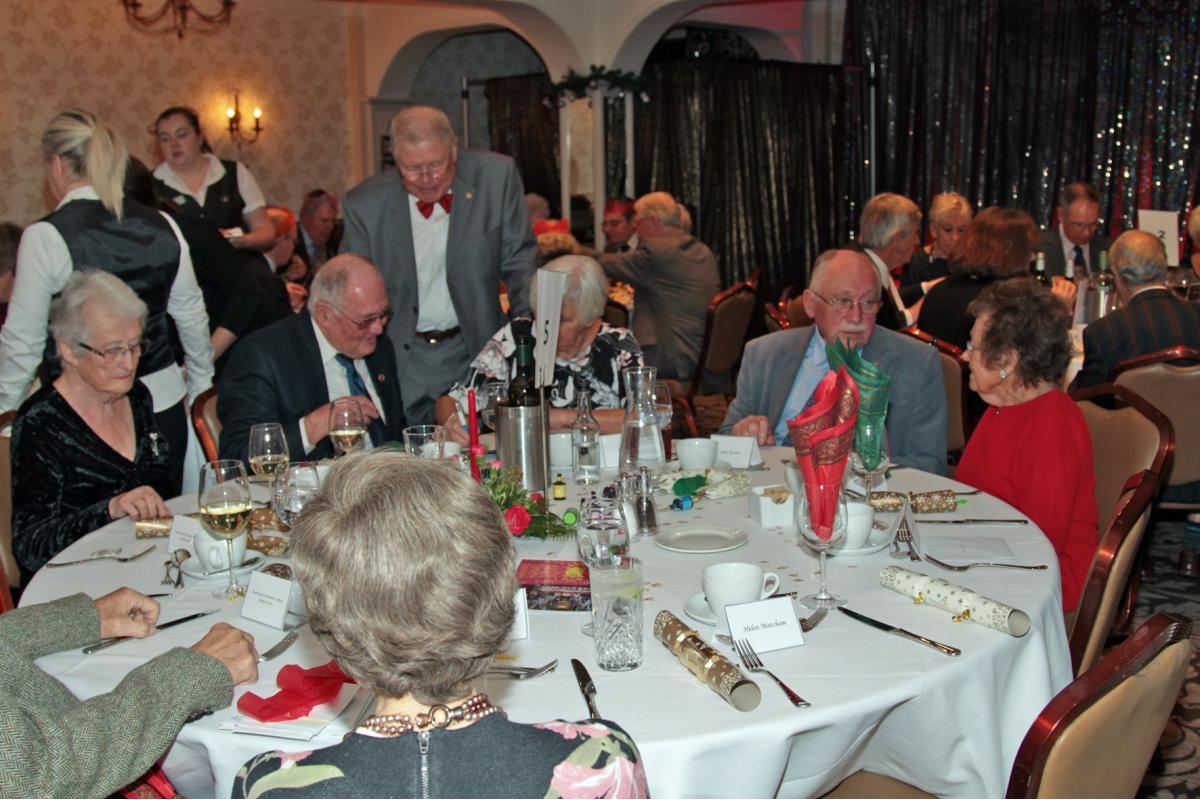 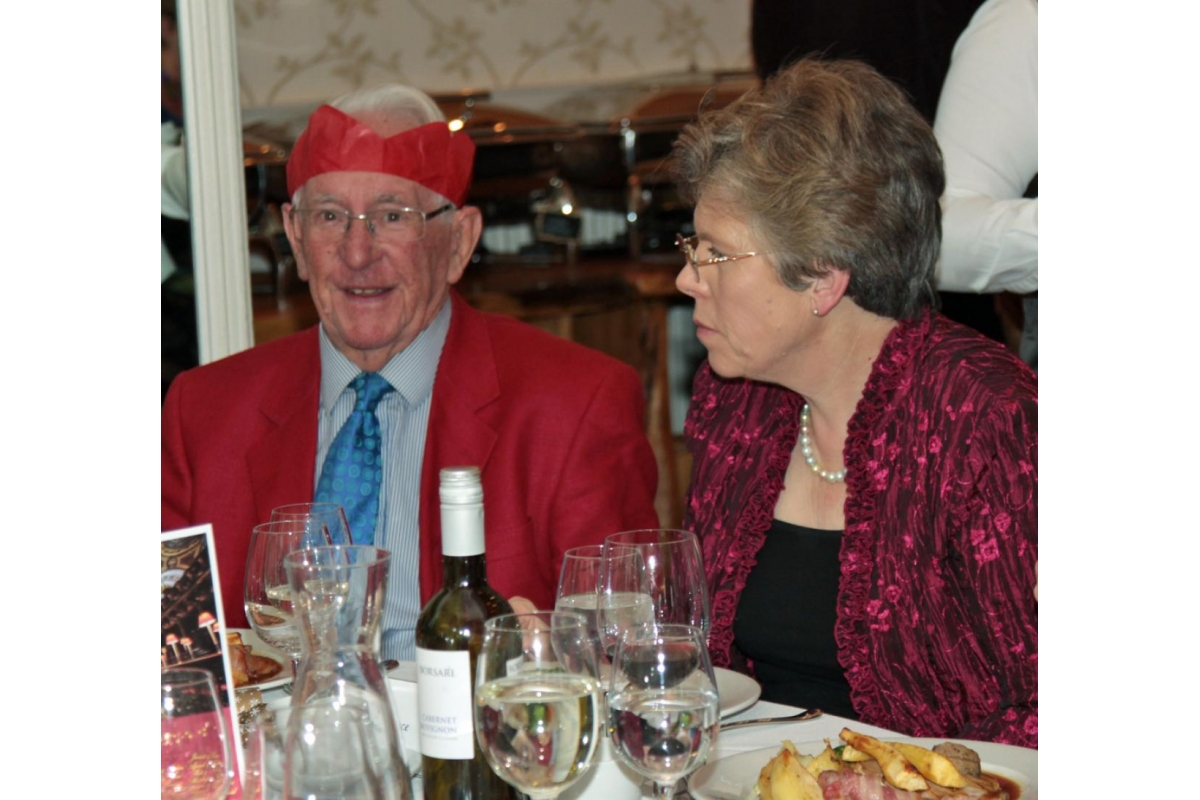 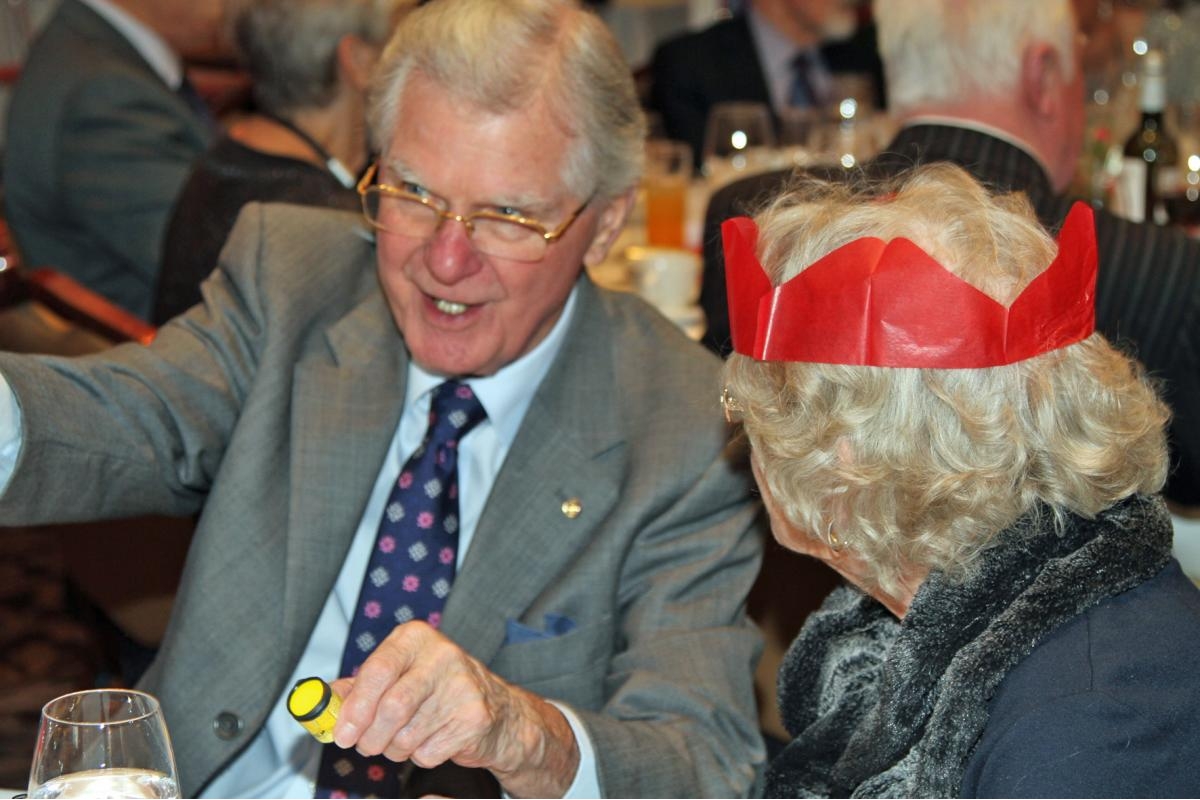 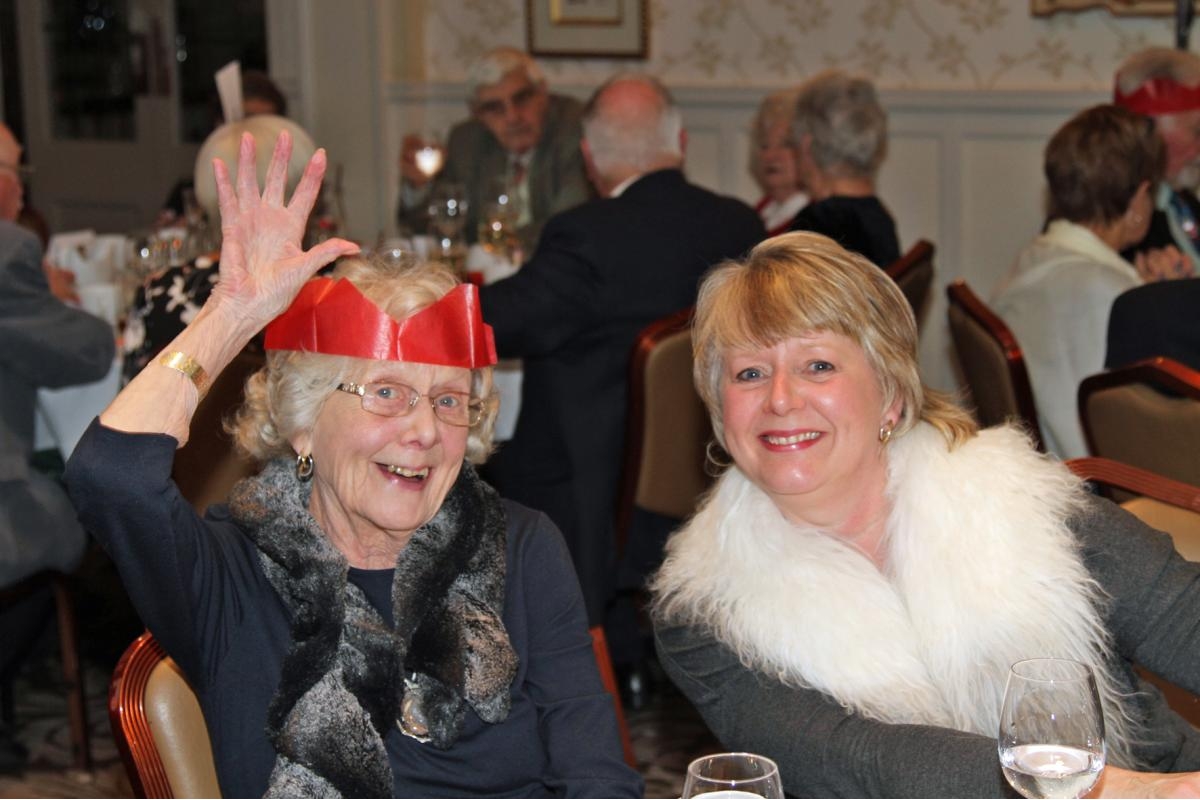 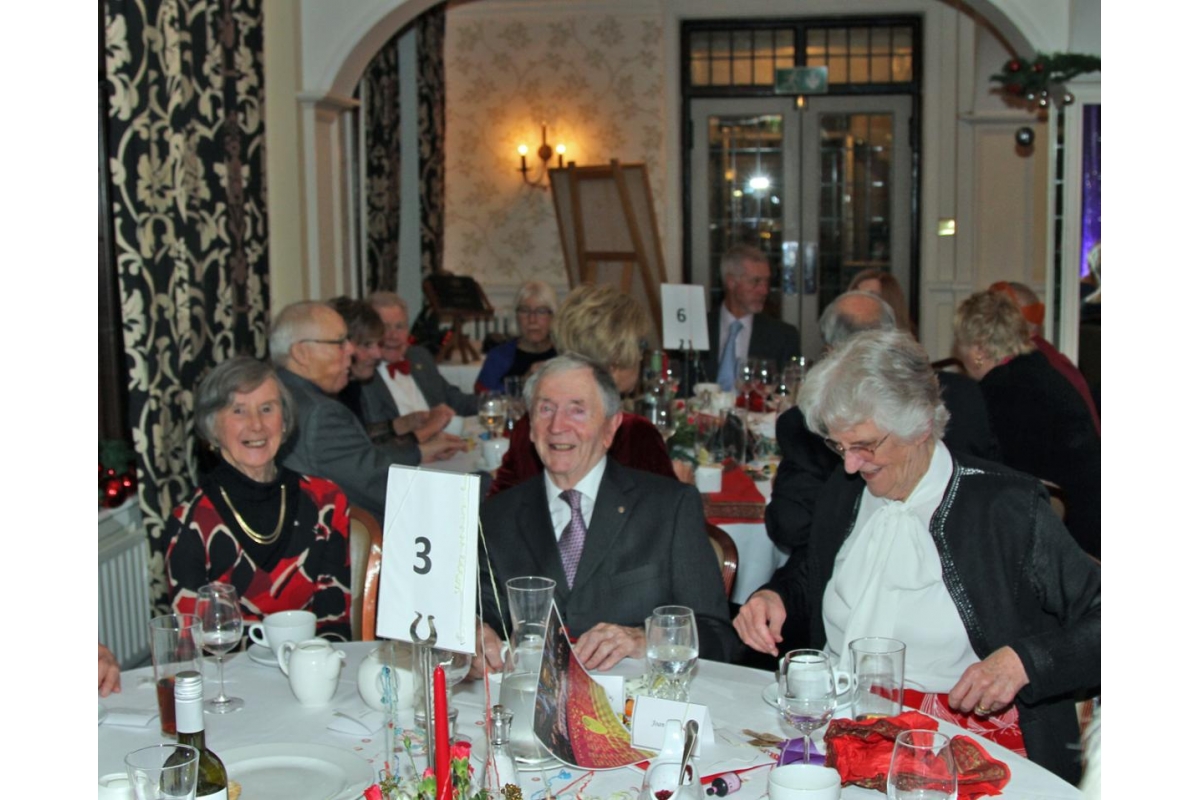 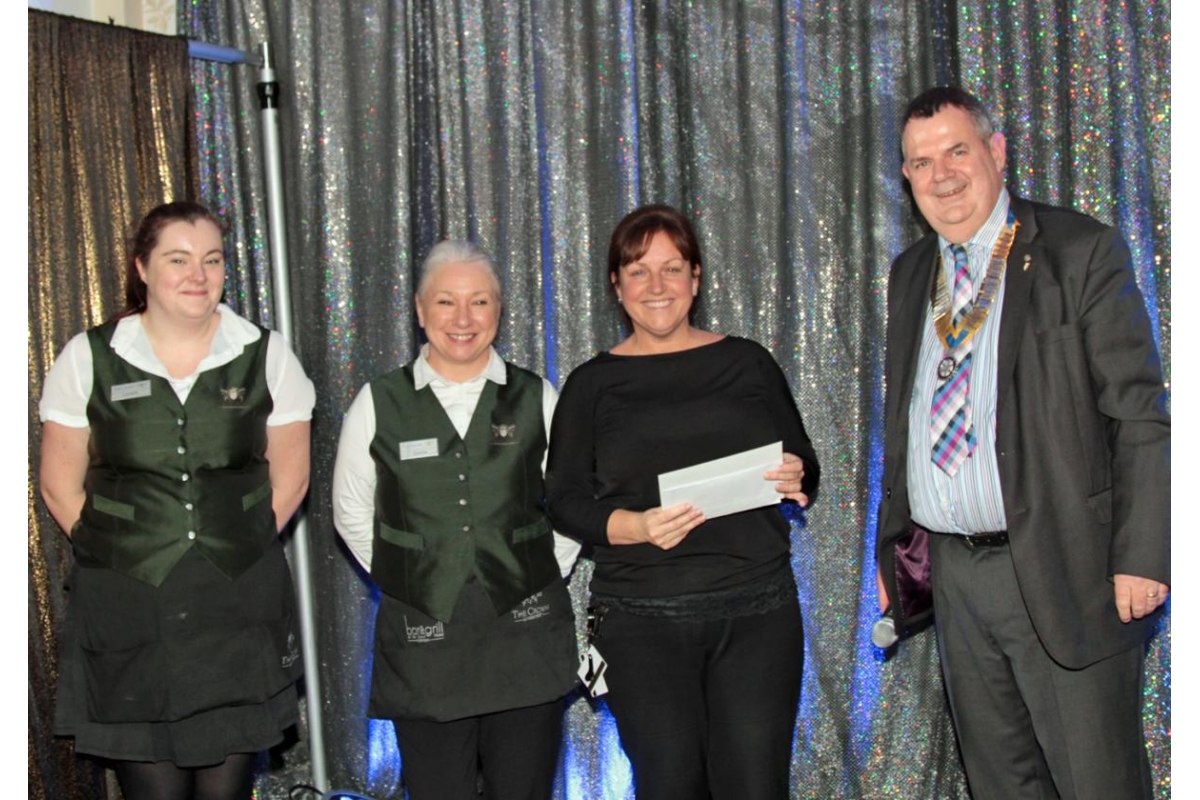 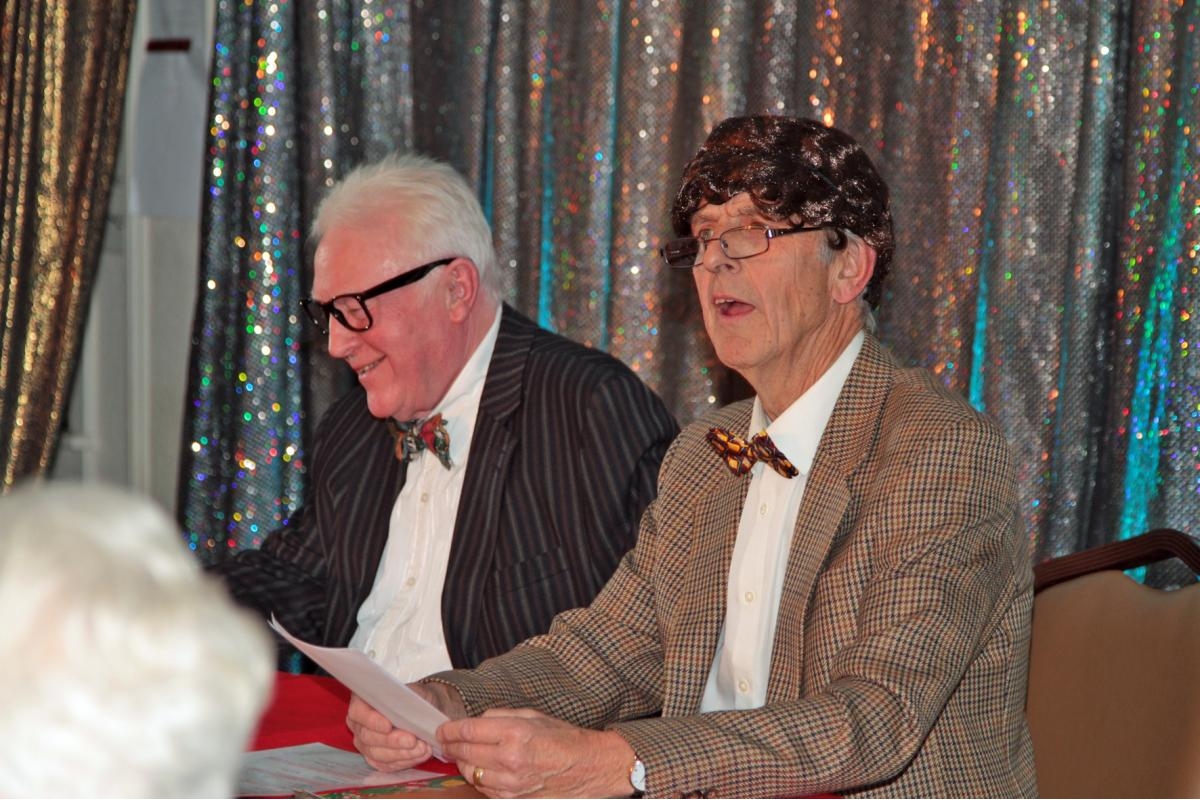 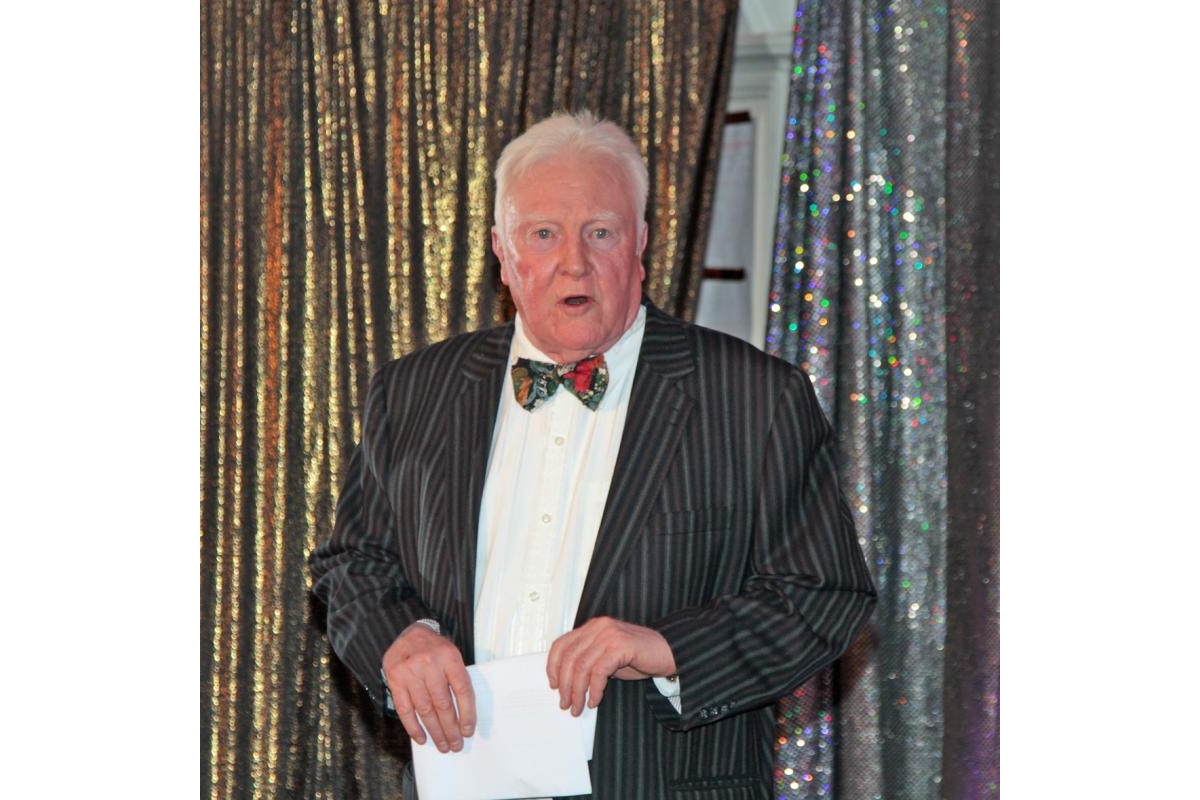 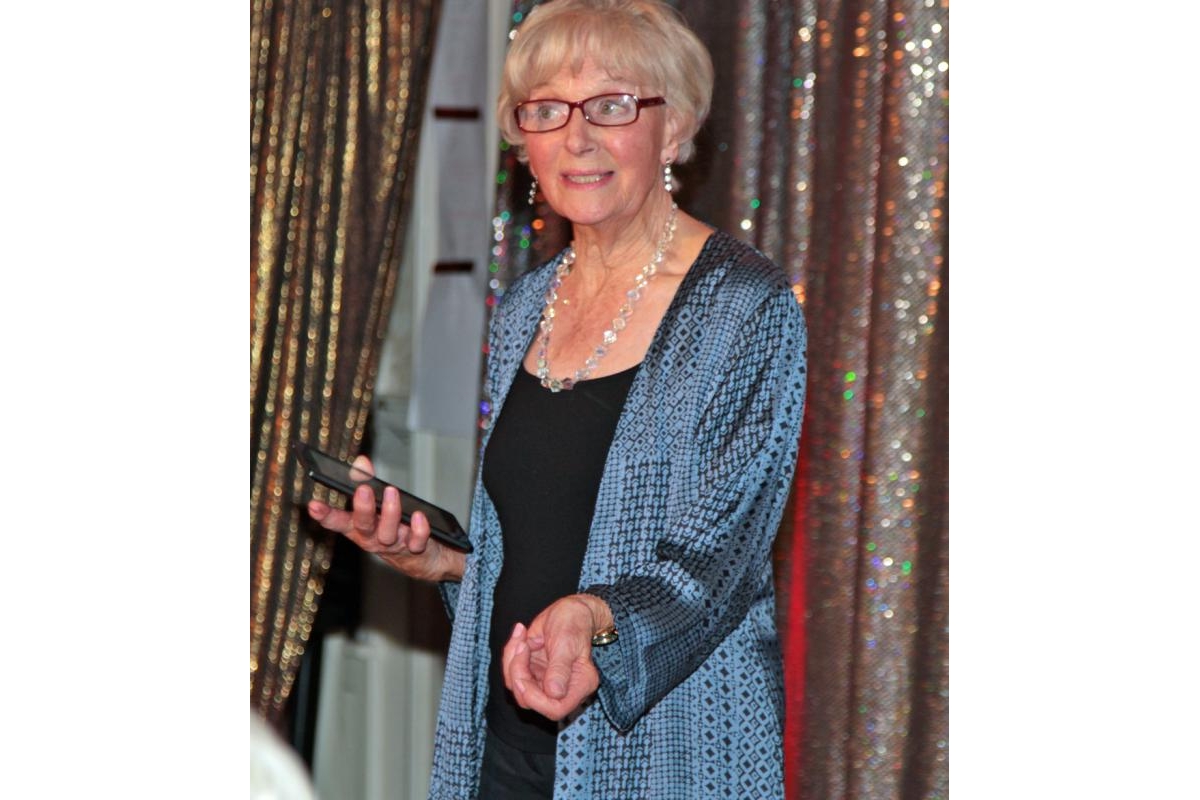 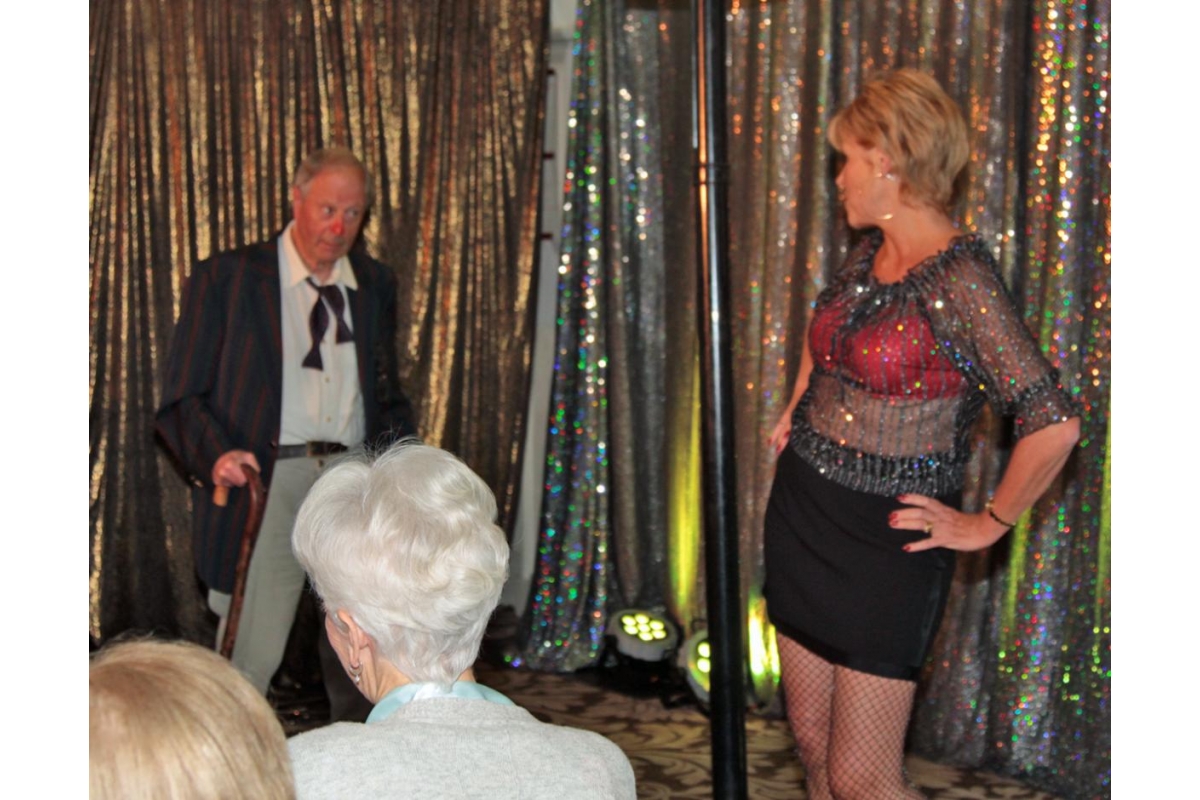 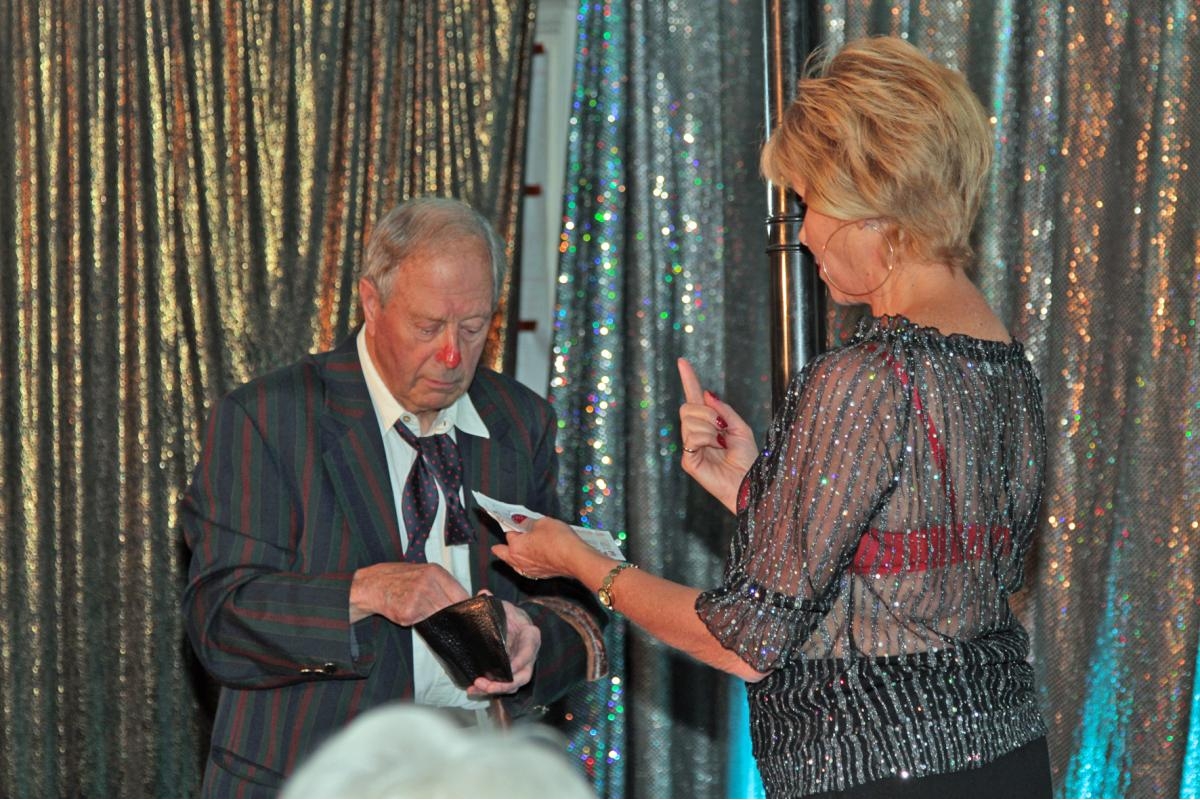 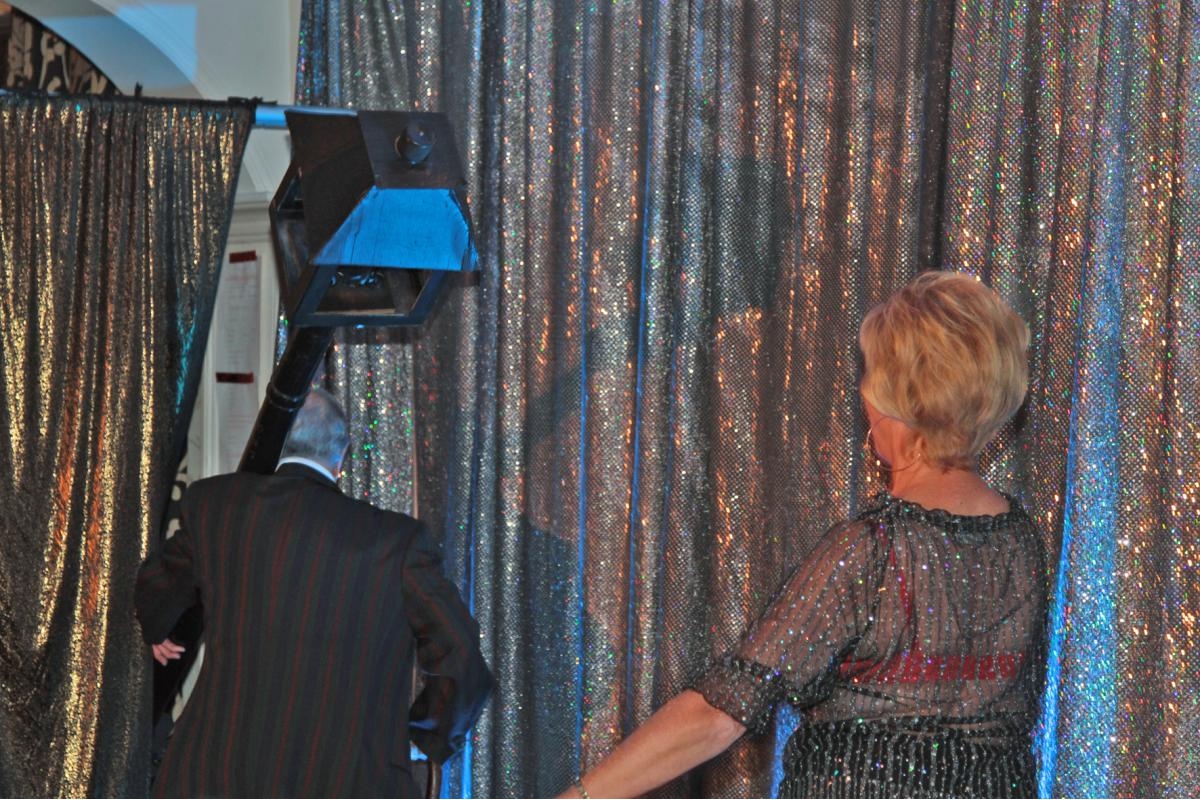 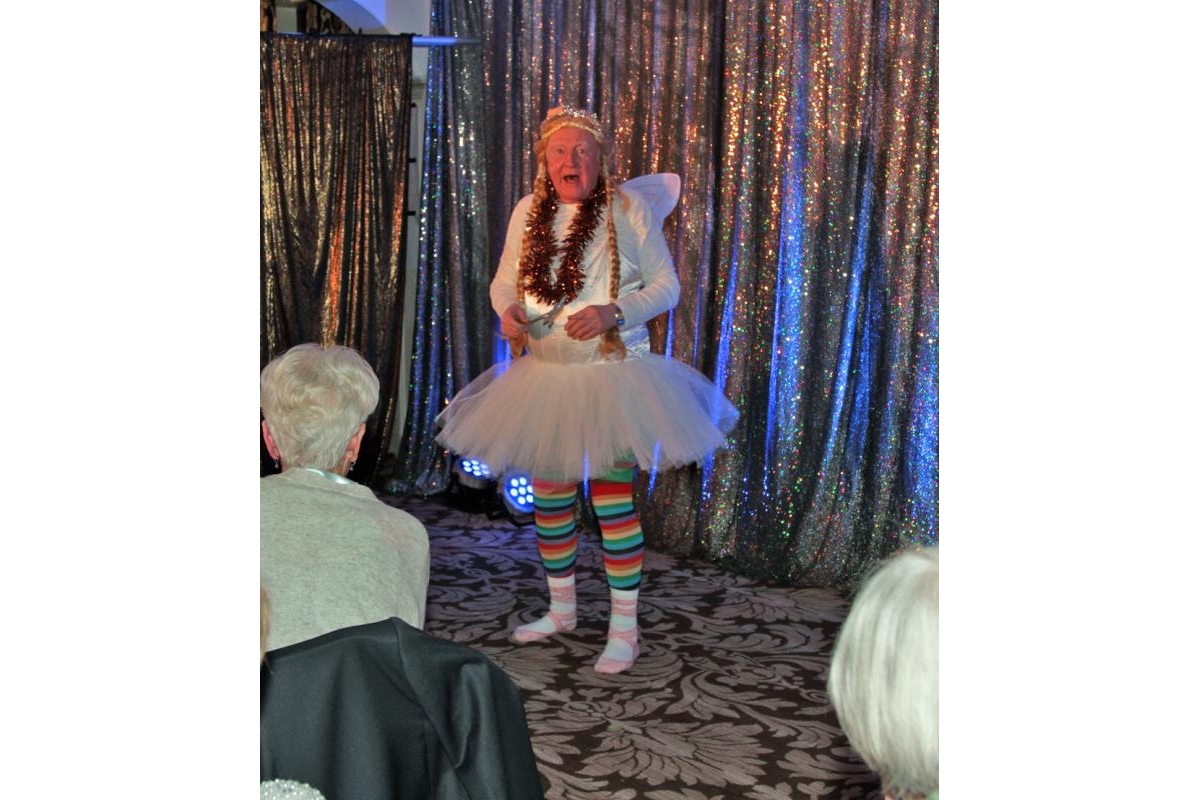 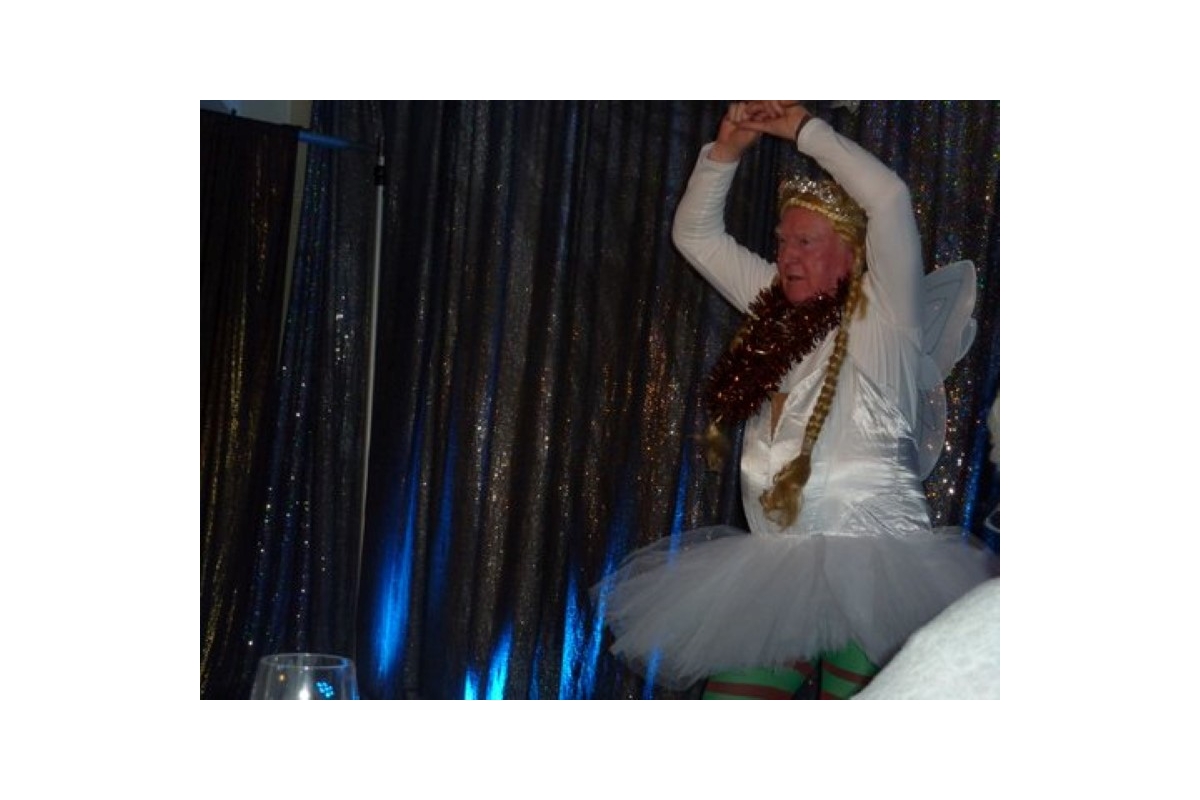 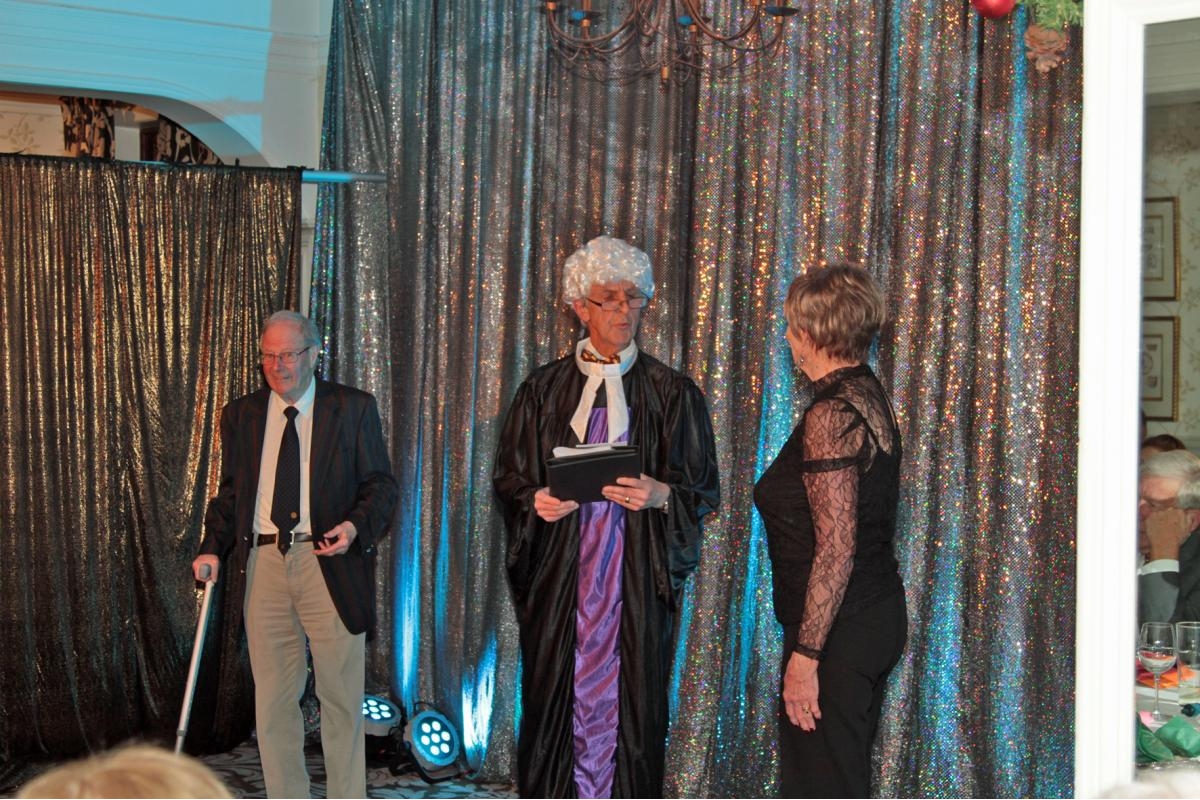 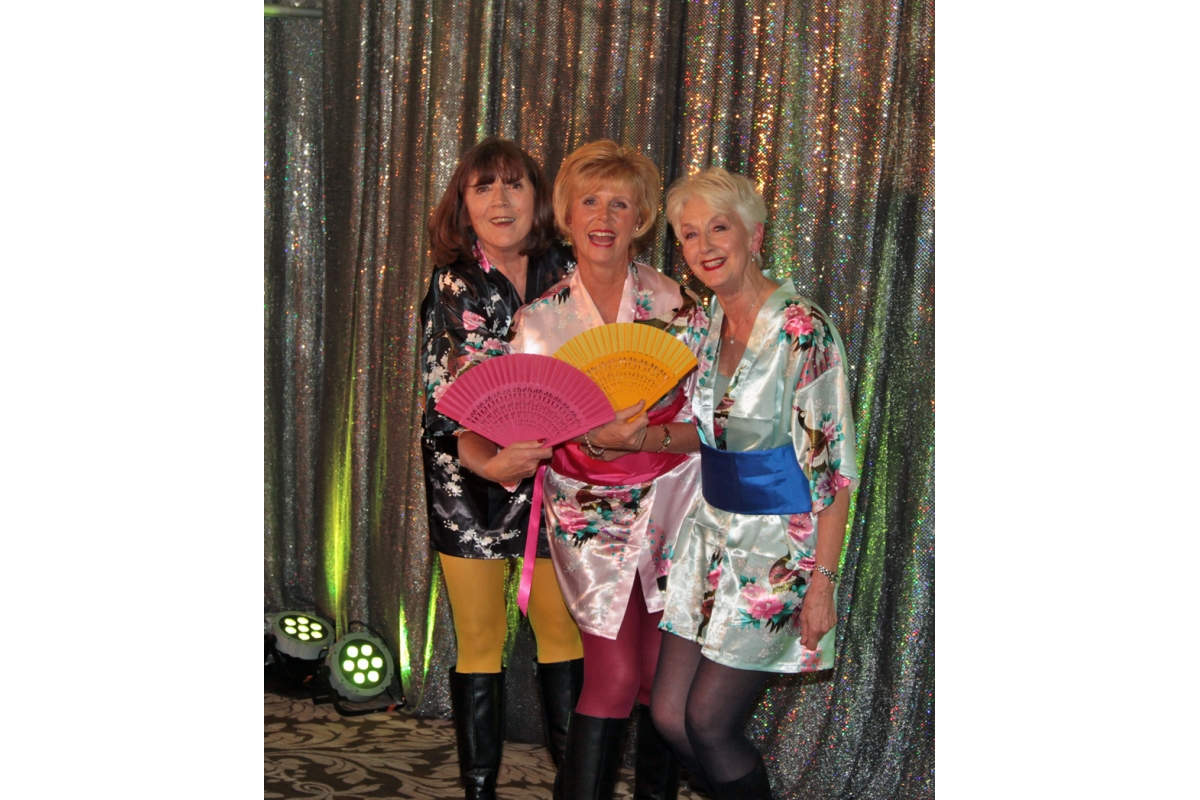 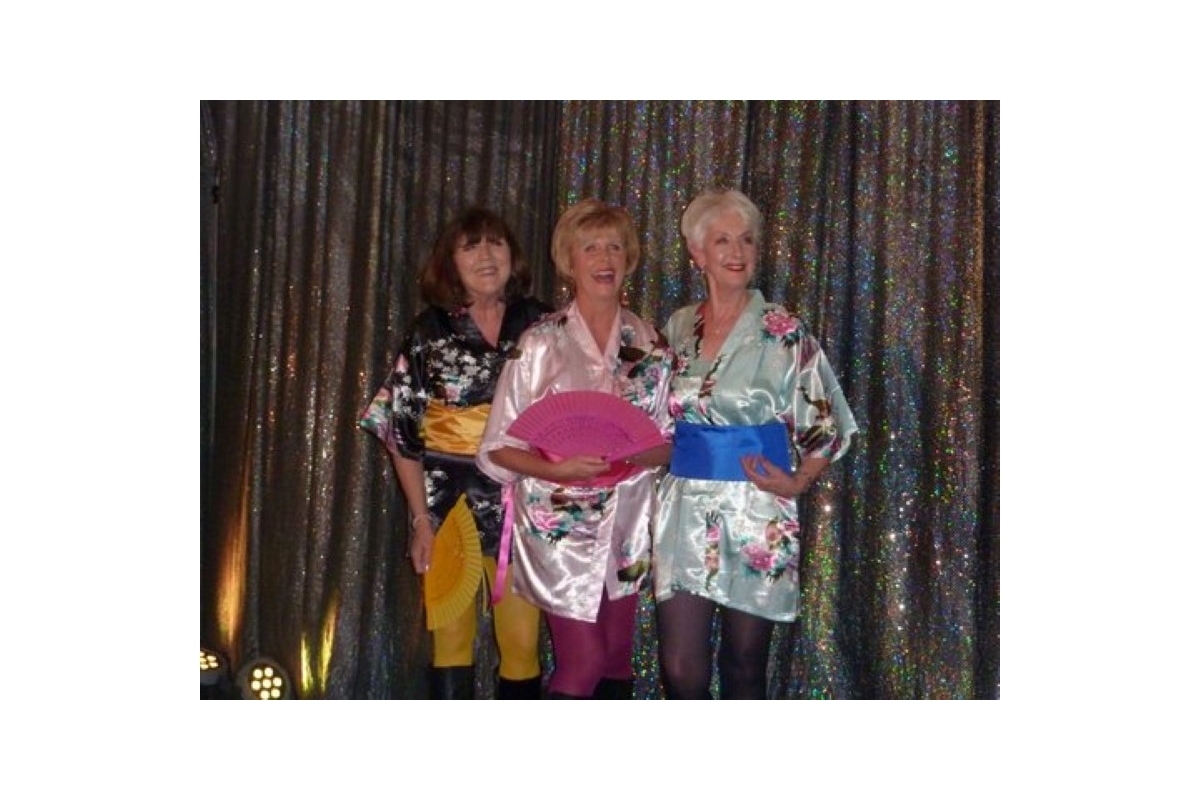 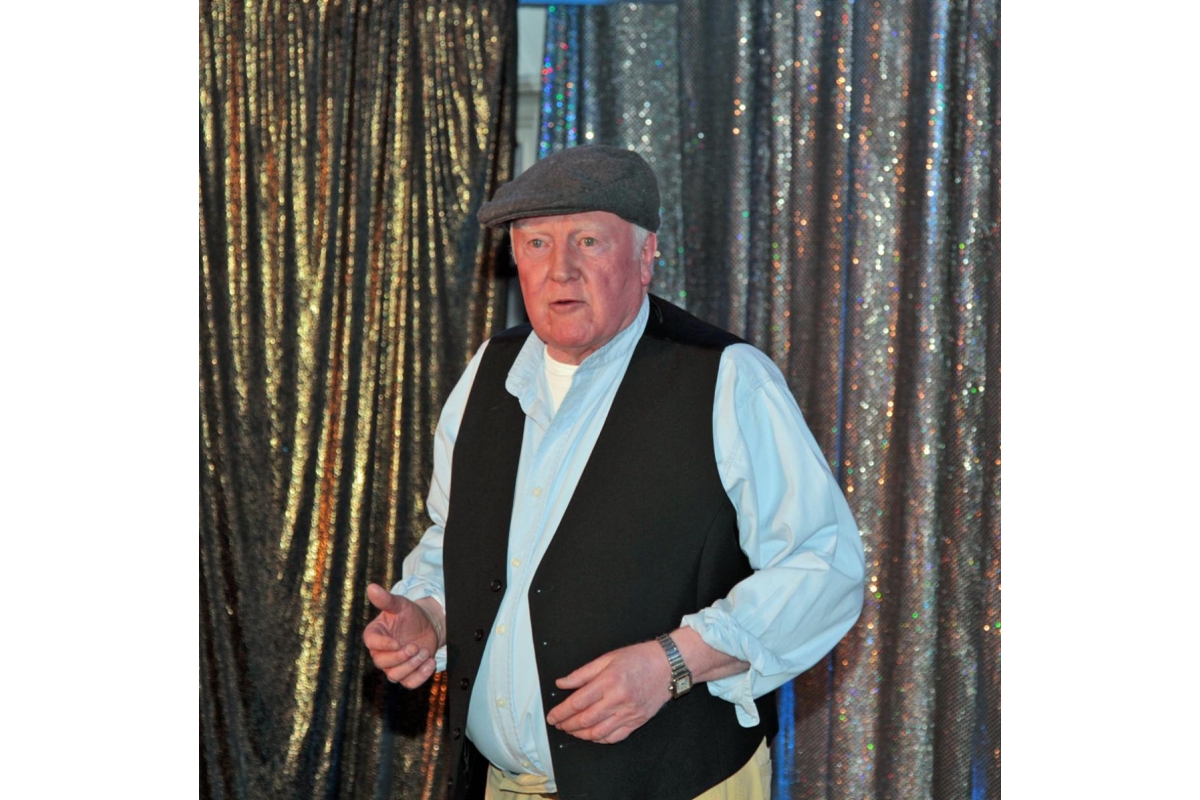 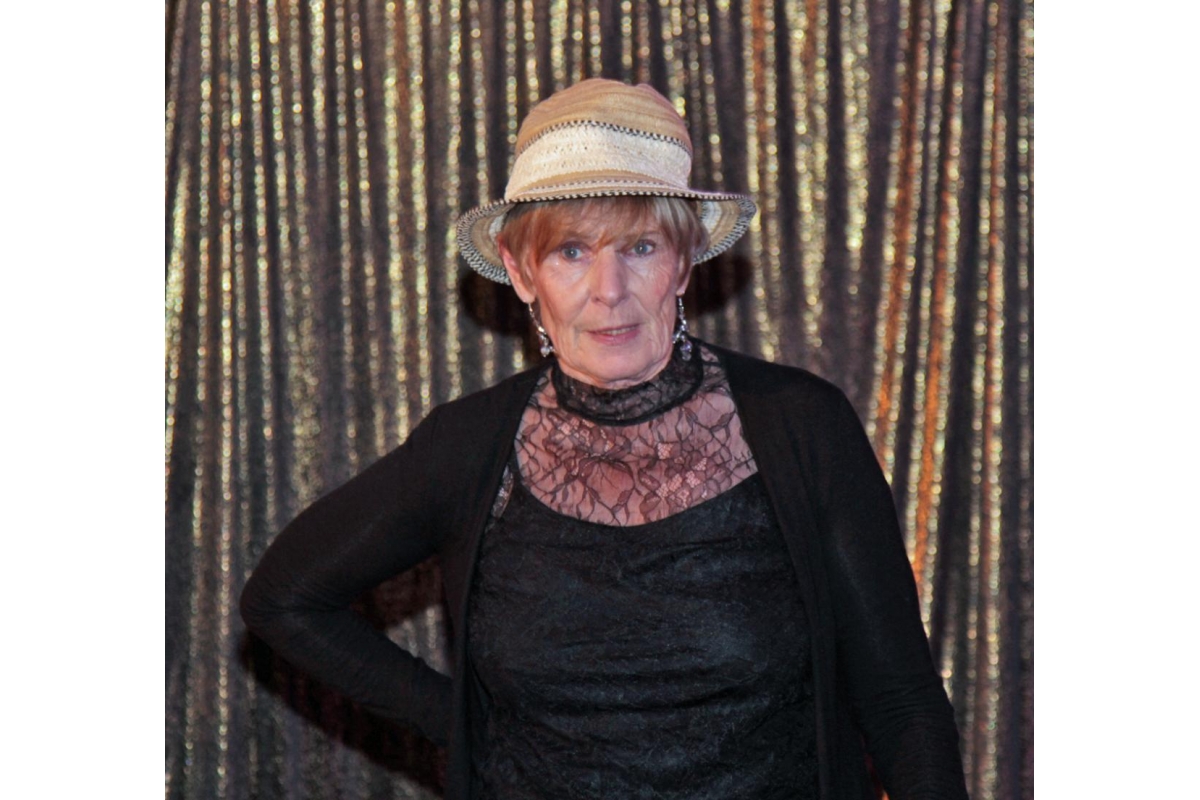 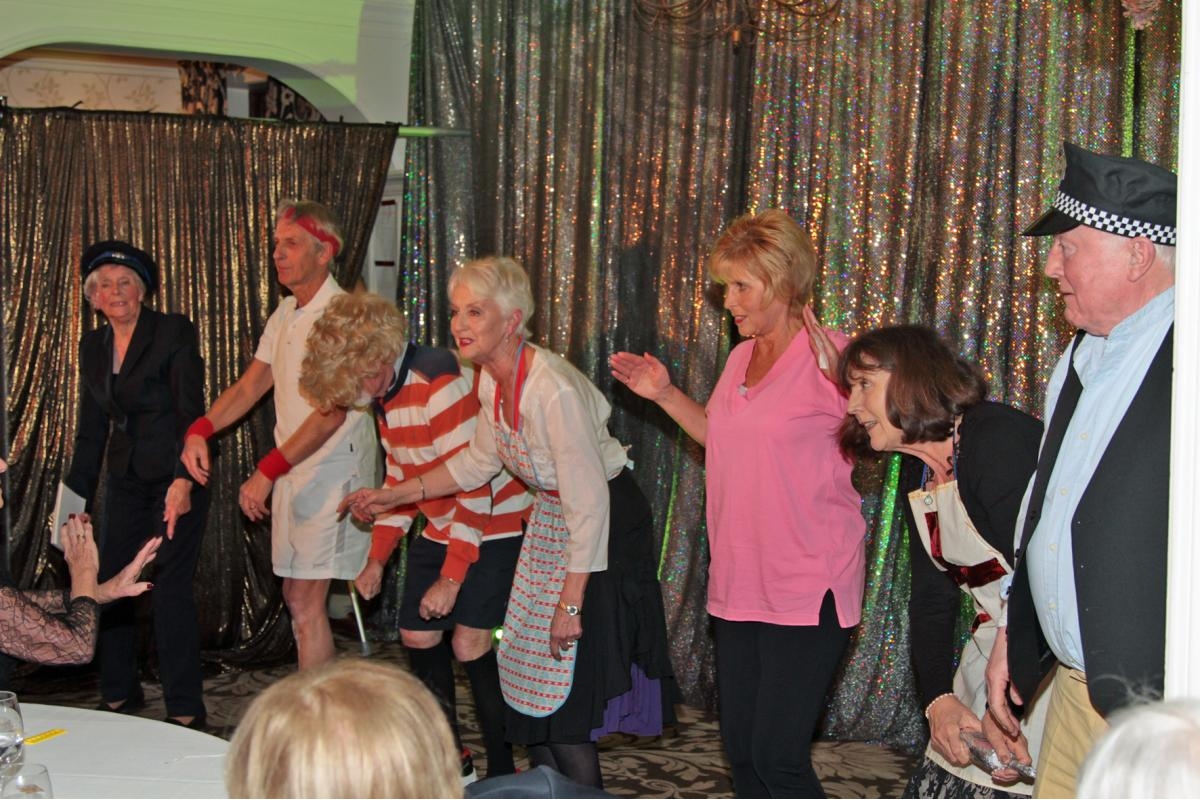 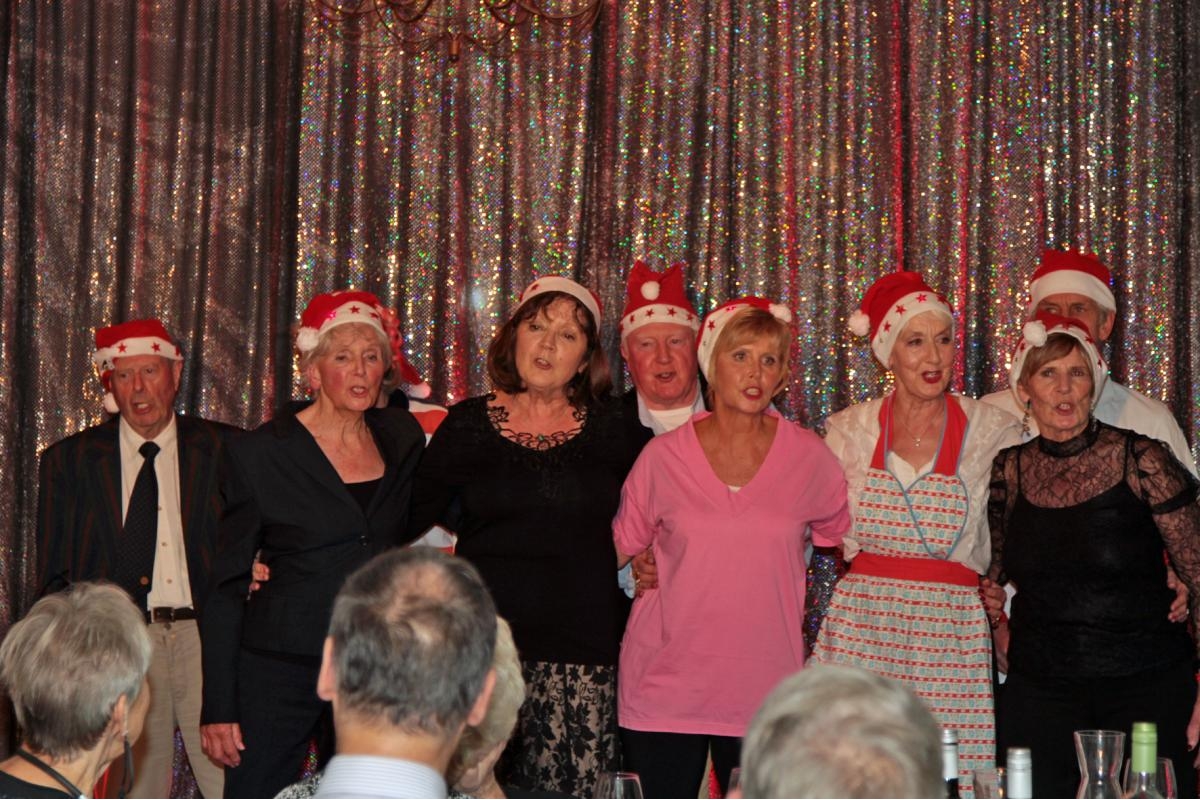 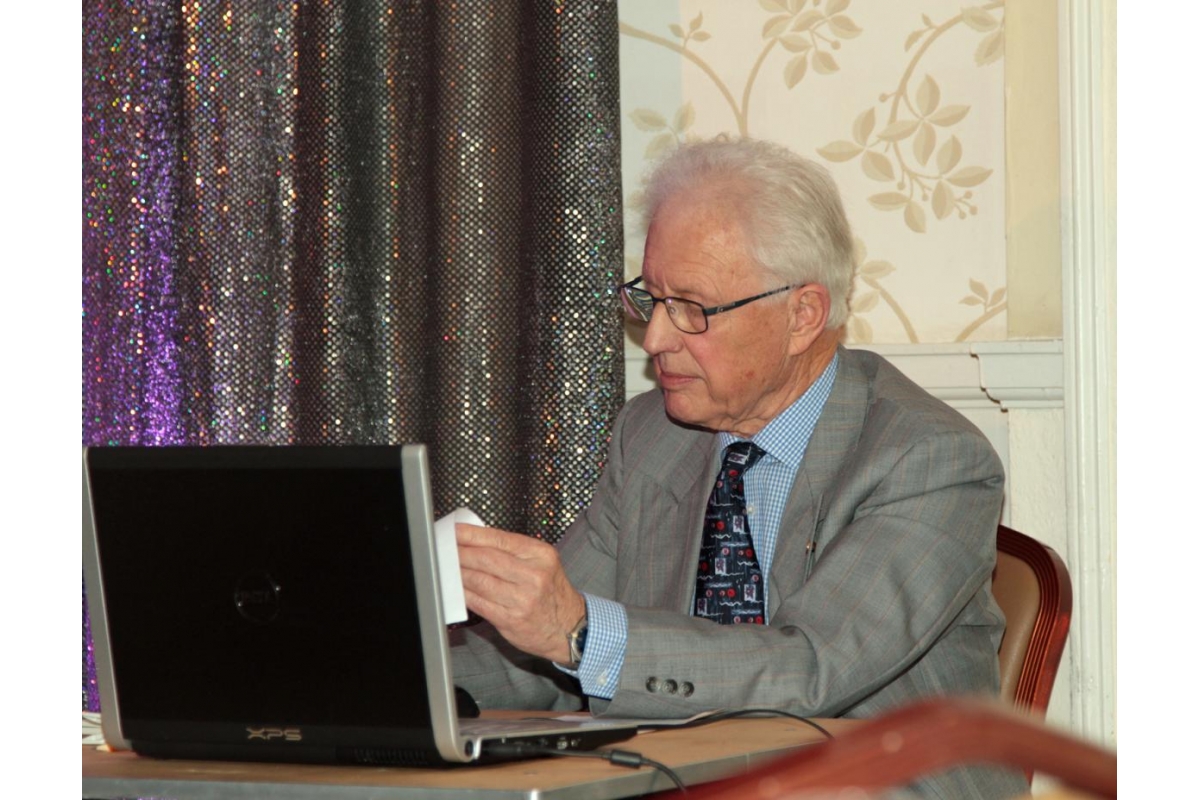 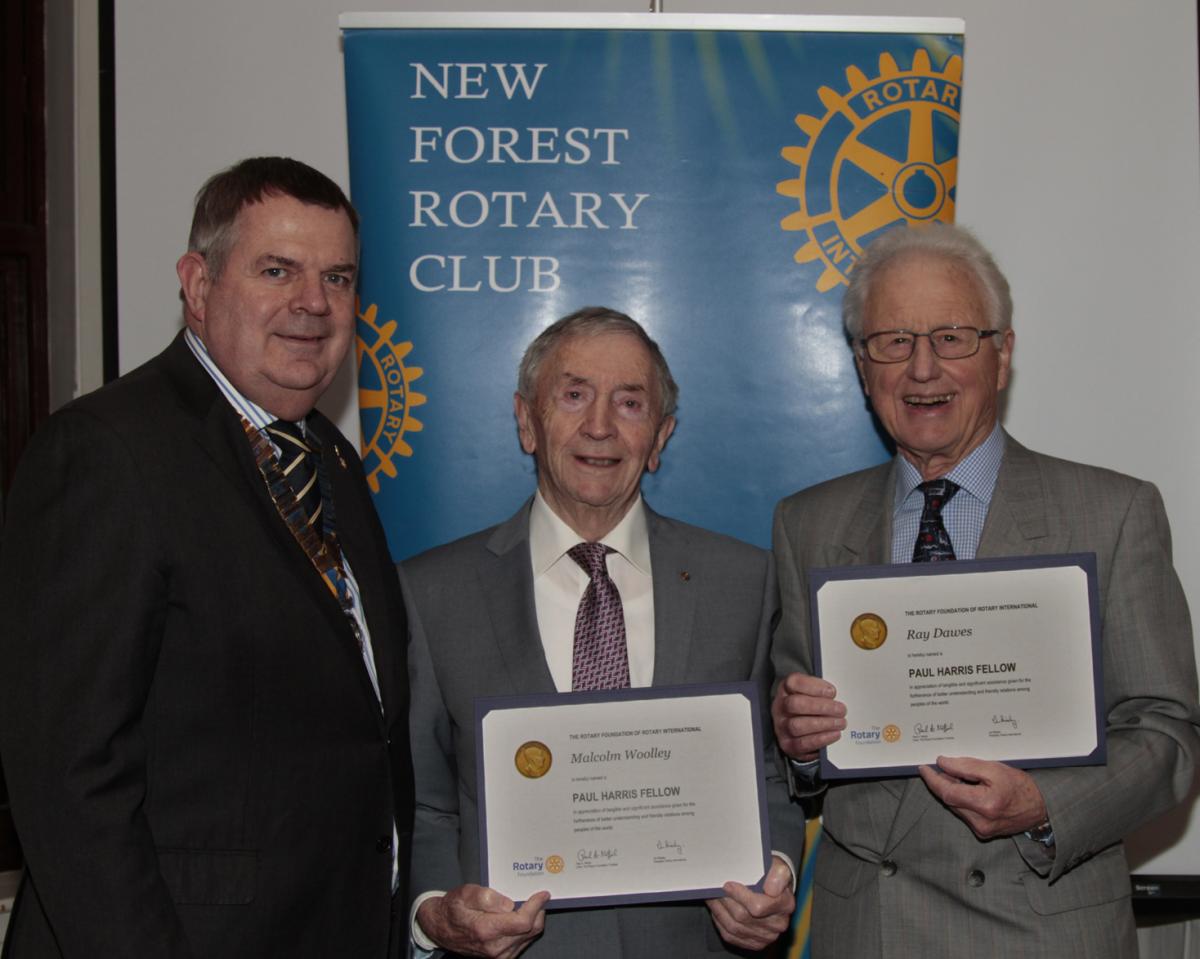 Our Annual Christmas Party was a huge success. The restaurant at The Crown was packed and over 60 of us were there..

Immediately after the excellent dinner President Tim called forward a dozen or so members onto the stage.. He then announced that this motley collection were the Paul Harris Fellows in the Club and he then called forward Malcolm Woolley from the audience and announced that he had been chosen to join their ranks. As is traditional, this was a complete surprise to Malcolm but not of course the PHFs who had selected him to join them. Malcolm was presented with the PHF badge and the mounted citation and was warmly congratulated by all present for this well overdue and thoroughly deserved award.

Next was the long awaited concert. Tony Roe opened proceedings and we were then treated to nearly an hour of sketches and presentations by Rotarians and partners. We saw Tony and of course John Crocombe in several comedy sketches - John, in costume on one occasion, singing that nobody loves a fairy when she's old! Pat Porter gave us two of her wonderful monologues. Anne Calvert proved that she had a great singing voice. John Kernan and Sally Ball mimed a splendid transaction between a drunk and a lady of the night - with a surprise ending.  We had a superb rendition  of "Three Little Girls from School are We" with Shirley, Sally and Penny. A great hit at the end of the concert was the familiar "If I was not a Rotarian" sketch with new and hilarious choices of careers and the addition of Clive Rutland with one of the best  worst wigs ever. On occasions it looked like a ginger cat crawling around on his head. The two months of rehearsals really paid off and it really was a brilliant effort. Some of the audience were in tears, usually of laughter.  The photos above were just a selection of the 124 that were sent to me and give a good flavour of the event.

President Tim thanked the troupe and made special mention of Ray Dawes who had compiled the music tracks and synchronised them to perfection. He called Ray forward and then, the second complete surprise of the evening, announced that he had also been awarded a Paul Harris Fellowship. Like Malcolm, Ray is a long term and dedicated Rotarian and his performance and commitment over the years had clearly made him worthy.

Your fellow members have decided to honour you for your commitment to Rotary and the New Forest Club. You

joined our Rotary Club in 1976, only a year after the founding of the club and was soon assimilated into the Rotary

ways by serving on, and chairing most of the club committees, You served as our President in 1985-86 and chose to provide portable equipment to help in diagnosing Epilepsy especially in children. It was during your year that the first Charity Golf Tournament was held at Bramshaw.

You are a keen yachtsman and twice helmed New Forest to victory in the District sailing competition supported enthusiastically (but not very skilfully) by Maurice Porter and John Kernan.

For very many years after the formation of the club it was your secretary Joyce who recorded attendances and liaised with the hotel.  You “roped in” Giffords as our major Business Partner, providing premises for various high profile meetings.

In more recent times you have been of great help to David with the Horse & Cycle events attending all the committee meetings, helping on the day and contributing in every way possible. Your concern for the welfare of our club has been well shown in the past few years with your paper “The Way Ahead”. Also you have written other papers for recent Presidents about changes that need to occur to cope with the challenging times we are in. You are a thoughtful and positive thinker.

Your Club has therefore determined to honour you with a Paul Harris Fellowship. The New Forest Rotary Club does not take this step lightly and we look upon this award as a mark of our very high regard for your personal commitment to the Rotary Motto, SERVICE  ABOVE  SELF

Your fellow members have decided to honour you for your commitment to Rotary and the New Forest Club. You joined our Rotary Club in 1982, and served as our President in 1996-97. You have served on all the committees, bringing a business approach and are known for getting things done. With your passion for gardening you chaired a series of Gardeners' Questions events with professionalism, good humour and importantly projecting the public face of our club.  You provided vehicles to chauffeur guests at our prestigious Polio Plus Film Premiere, and made your showroom available for fundraising Casino Evenings.

You produced the Bulletin for nearly ten years spending considerable time ensuring the end result was of the highest quality. You provided editorial support to Ken in the production of the 40th Anniversary Book

You have had a major involvement in the club's last three Christmas Cabarets. Taking many hours mixing the music you then spent several weeks painstakingly rehearsing with the cast until they got it right!

You have been our 'court' photographer for many years responding to successive Presidents to attend and photograph events so that these are recorded on our web site and where possible in the press. You often go to a presentations at unsocial times but always make the time. You are a stickler for detail and quality control, which is appreciated by us all.

Your Club has therefore determined to honour you with a Paul Harris Fellowship. The New Forest Rotary Club does not take this step lightly and we look upon this award as a mark of our very high regard for your personal commitment to the Rotary Motto,  SERVICE  ABOVE  SELF.