Two of our members, Elaine Hind and Bernard Stoneham, have been closely involved in international projects in India and Sri Lanka.

We spent 3 days in Delhi in February 2016 as part of the Rotary Polio Immunisation (Programme) Day (NID).

Day 1: we walked through the local towns and villages with local schools and Rotary clubs advertising the NID and encouraging families to bring their children (aged 0–5 years) to the booths the next day.

Day 2: (NID) children were brought to the local booths (which are set up at numerous points across India) and given two polio drops each. Their small fingertip is painted with a purple dye (to make sure they do not receive the drops again).

Day 3: (known as ‘mop-up day’) we had the privilege of going into the villages and slums with the local health workers to meet the wonderful Indian people and to ensure all young children had received the drops.

This trip was an incredible experience and the Indian people are the most welcoming, friendly and hospitable I have had the privilege to meet. I aim to go again next year and would encourage others to do the same!

The Tea Leaf Project
The Tea Leaf Trust is a UK-based charity that supports two schools in the tea-growing regions in the Central Highlands of Sri Lanka. It was the brainchild of Tim Pare, an Englishman who had the idea to do something positive to help some 8 years ago. He started the first school in a disused warehouse with the vision that if you could teach English and business studies to young adults it would greatly increase their chances of breaking out of the awful deprivation and poverty that exists in the village of the tea plantations. These were the children of Tamil tea pickers who earn less than a pound a day.

The Trust runs the Tea Leaf Vision Centre for Professional Development where they provide a high-quality education for 18–24-year-olds in the tea leaf estates in Lanka. They were looking for enthusiastic volunteers who are passionate about making a positive impact on the lives of others. I had visited Sri Lanka some 3 years ago and saw first-hand the success of the school.

When I heard that a second school had opened a year ago I volunteered for 3 weeks to help speak English to the pupils but also if any maintenance work was needed I would do what I could.

After a long flight from the UK I arrived in the capital city, Colombo, where I was given a very warm welcome and hosted for an overnight stay by a supporter of the Trust. The next day comprised a 6-hour journey into the hill country to the east of Colombo. It was much cooler than I expected but we were at 6000 feet above sea level!

This was not what I expected – there were only two toilets for 136 pupils and staff. Could I build two more toilets, male and female, in a disused building at the rear of the school!!! This project was in addition to minor improvements like shelves in the teachers’ common room and a new door and a partition between two classrooms. Finances were tight so after doing a first costing I had to cut back the planned work by around 50%. Priority was given to the toilets and shelving.

B&Q do not exist in Sri Lanka – everything is small scale so actually getting supplies proved be very time consuming plus suppliers did not deliver! Luckily, after school hours, a number of very enthusiastic young men volunteered to carry pipes, toilets, washbasins, urinals and timber, etc. back to the school from the suppliers in town. 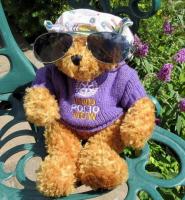 more A valuable charity that RCCH is pleased to support. 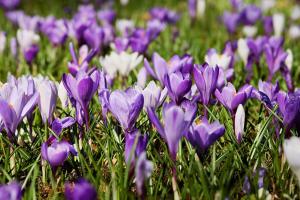 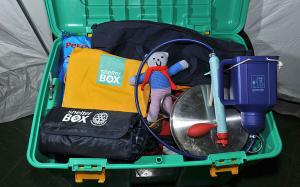 more Rotary and ShelterBox are project partners in disaster relief. RCCH funds several ShelterBoxes each year that are financed by bucket collections or other fundraising events organised by the Club. 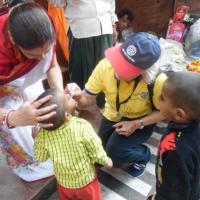 HOW WE HELP THE INTERNATIONAL COMMUNITY