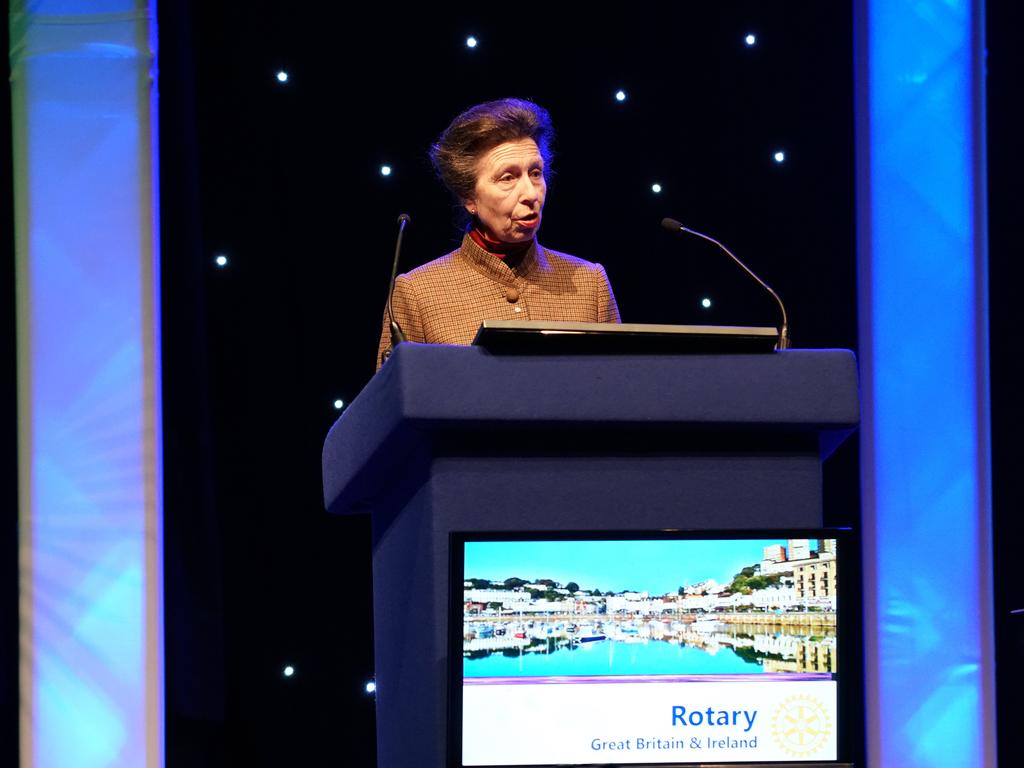 Over the course of three days Rotarians were informed and entertained by a variety of speakers including a member of the Royal Family.

Leading Rotarians attending were Ian Riseley, International President and member of the Sandringham Rotary Club, Australia, and the Rotary GB&I President, Dennis Spiller.  One of Swindon North’s Rotary Club members was there and has provided this report.

The Princess Royal was invited to speak about her experiences with the “Save the Children Fund” but she also mentioned the work done by a variety of voluntary organisations, including Rotary.  She said: “The fact End Polio Now has worked so incredibly well is a huge credit to every individual member of Rotary.  We don’t very often get an opportunity to say thank you to groups like Rotary – but thank you, and congratulations.”

There was quite an emphasis on Rotary’s “End Polio Now Campaign”. Only 22 cases of polio were reported in 2017 in just three countries – Afghanistan, Pakistan and Nigeria.  Over 450 million children are immunised against polio each year with volunteer Rotarians playing a full part in the programme.  Paul Harvey, a Rotary volunteer polio vaccinator in India, spoke about the challenges facing those trying to carry out the immunisations with little sanitation, open sewers and lack of access to some areas of the country.

An entertaining and humorous presentation was given by Chris Tarrant.  Although he spoke mainly about his time on “Who wants to be a Millionaire?” he also had an emotional story about a school friend who had died after contracting polio before the full immunisation programme had been introduced in the UK.

Two senior detectives from the City of London Police addressed Conference on the subject of cyber crime and internet fraud. A very useful session and the subject was expanded on at a workshop. Earlier, the Chief Constable of Devon and Cornwall had given a speech in which he was clearly trying to encourage volunteers to come forward to support the Police.

There was an entertaining and humorous talk from Phil Bennett OBE who won a total of 29 Welsh rugby caps, and a very motivational one by Liz Johnson, a Paralympic swimmer.  Rotaract and other Youth projects were showcased and the Rotary Young Musician of the Year, a harpist, provided a musical interlude.

“Dementia – a whole community response” was the title of a talk by Angela Rippon.  In her capacity as an Ambassador for the Alzheimer’s Society she gave a lot of information about the steps being taken in communities across the country to increase awareness about Dementia and its effect on families. Angela Rippon’s late mother was a sufferer.

Alex Leger was the Location Director, Producer and Cameraman for Britain’s best loved childrens’ programmes Blue Peter. Entertaining and amusing, he showed a number of clips from the programme, including the young elephant that misbehaved in the studio!

The last day of Conference, a Sunday, began with “Thought for the Day” from Pam Rhodes of BBC “Songs of Praise” fame.  A return to the End Polio Now theme followed with a French Director of the World Health Organisation providing a great deal of information about the efforts to eliminate Polio.

Presentations of two of Rotary’s overseas projects – Global Sight Solutions and Sand Dams – came next and the session concluded with a hilarious talk by Lydia Slack entitled “An awkward age”. She spoke about her years growing up on a farm in the Peak District and had many extremely funny tales to round the Conference off superbly.